Artist and author of “Above the Timberline” visits NMU 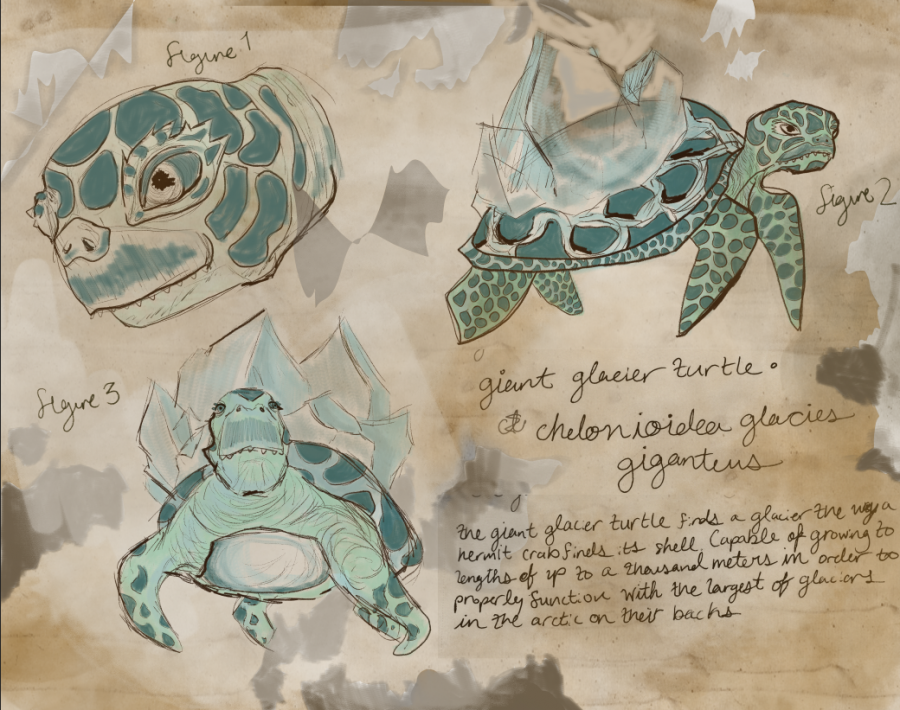 INSPIRED ART - Art student Ilah Wilson created icy turtles inspired by Greg Manchess' art in "Above the Timberline." The theater department is performing an adaptation of the book that will feature Manchess' art in the background.

The NMU Department of Theatre and Dance is putting on the stage play adaptation of the novel “Above the Timberline” by Greg Manchess and they invited him to work with the department in producing it.

Manchess has been in contact with the theatre department for many months figuring out the details of the performance, from lighting and sound effects to script work and performers.

“Above the Timberline” is a novel about a dystopian world 1500 years in the future. The poles have shifted and the entire planet is frozen. The continents collided, cities became buried and the remaining people are left to relearn the technology that was lost. Set within this frozen tundra, Manchess creates a coming-of-age story.

“Within that is a story of Wes trying to find his father, who is an explorer who got lost trying to find a buried city in the ice,” said Manchess. “And it is all about [Wesley] growing up.”

Manchess got the idea for the book through his illustration of a man and a pack of polar bears on a mountain.

“I was asked to do a painting how-to video for a film crew and at the last minute … I came up with an idea of some guy going up a mountain with polar bear pack animals, so I painted that over the next two days while the crew was filming and people fell in love with the character,” said Manchess.

He named the painting “Above the Timberline” because that is where he imagined the man and polar bears were.

One of Manchess’ friends encouraged him to go to a publisher with his work, so he began to build a story based on the painting and wrote and illustrated an entire novel. Most pages in the book are filled with his colored paintings accompanied by writing to describe sounds, smells, personalities and the characters that carry the story forward.

“I was going to do a graphic novel, but I did not want to do all those panels … I wanted to open the book and have the sweep,” Manchess said.

The paintings from his book are going to be projected behind the NMU performers in the live theatre adaptation. There will be no sets on stage, instead, the scene will be portrayed through the projected paintings and character dialogue.

Manchess worked on “Above the Timberline” for eight years, sketching out thumbnails and bringing the story to life. Manchess related himself to the main character Wesley.

Eventually, he did get accepted to an art school in Minneapolis and has been successfully traveling as a freelance artist since graduating.

“So my character is a guy who encounters ‘no’ a lot, and says, ‘I am just going to try anyway.’ It fails but he picks himself up and keeps going,” Manchess said.

Manchess is now an established artist, but he has not forgotten the challenges he faced to build his career.

While he is visiting NMU, Manchess will be reviewing work and offering demonstrations for students in the art department. He begins his classes by showing students where he began with illustrations from his school years, as well as discussing the factors and results of succeeding.

The painting demonstration he does focuses on failing and recovering through the brush strokes.

“I put the strokes down very deliberately, and they are not always correct, and I correct them and move forward … What [students] pick up from it is a professional that still experiences the same thing they do, but because of the length of time and effort and training. I know how to get out of it and keep moving,” said Manchess.

Manchess is still working on his career, emphasizing that success comes from determination and ambition rather than talent.

“I call it focus training for students. Do not wait for it to happen. Do not wait for your muse because they are going to show up drunk and belligerent. What it is going to take is your mental effort,” said Manchess.

When he approaches art, Manchess believes creativity happens within a restricted space and that constraints can be beneficial in the creative process.

Ilah Wilson, junior art illustration major, described the constraint the illustration students were given regarding their assignment about Manchess.

“So the project was pretty vague. It was to put yourself in the world of “Above the Timberline” … You could do character concepts or landscapes or posters for the show or whatever. It was really open to interpretation,” said Wilson.

Wilson illustrated an arctic version of endangered animals as if they were from the icy world of the novel.

The Student Art Gallery is holding a competition with all of the work inspired by “Above the Timberline,” and Manchess will be the juror for awards.

NMU’s theater production of “Above the Timberline” is showing Friday, Oct. 15 – Saturday Oct. 23 at 8 p.m in the Forest Roberts Theatre. Tickets are $17 for the general public, $12 for NMU faculty/staff, seniors and military, $10 for students and $5 for NMU students.