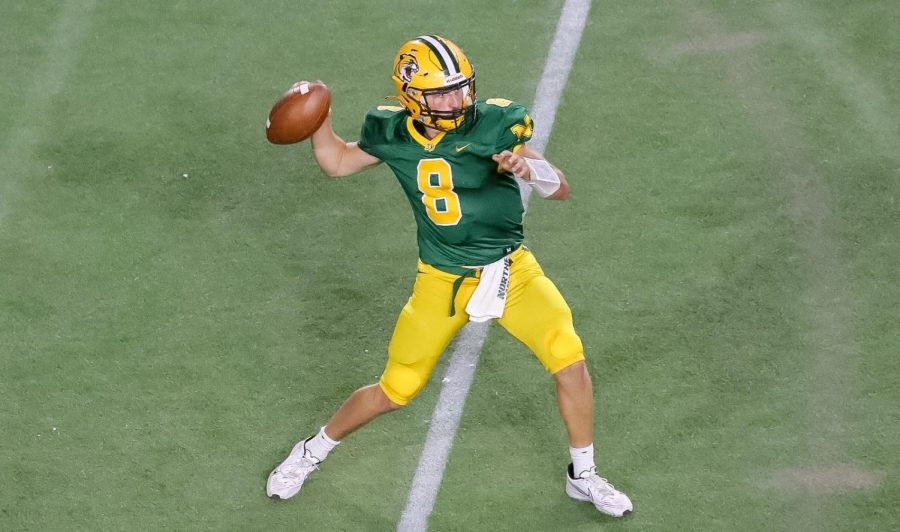 TOUGH BLOW—NMU quarterback Drake Davis drops back to pass during Saturday's 21-14 loss to Michigan Tech. The Wildcats have now lost 11 straight meetings against the Huskies dating back to 2010. Photo courtesy of NMU Athletics.

It seems whenever Northern Michigan and Michigan Tech lock horns on the football field, the Wildcats find a new way to fall short. The same can be said for this year’s edition of the U.P. rivalry, as NMU’s late-game mistakes cost them in a 21-14 loss on Saturday afternoon.

In the final five minutes of the game alone, the ‘Cats (3-4, 1-2 GLIAC) threw a red-zone interception, missed a 41-yard field goal to take the lead, multiple missed tackles on a third down run to get the first down and a broken coverage to give up the game-winning touchdown with 18 seconds left. The Huskies’ connection of quarterback Will Ark and wide receiver Jordan Janssen was potent all day, but no play was bigger than their 31-yard hook-up for the game-winning score that secured Michigan Tech’s 11th straight Miner’s Cup win.

Setting that touchdown up was a 12-yard rush by MTU running back William Marano on third-and-eight to extend the drive with under one minute to go. The Wildcats missed a few tackles on that play, and it would’ve gotten them off the field and one last chance to win the game.

“You can’t let things get away from you,” Nystrom said. “When you have opportunities to score, you got to score. When it’s third and long and you miss six tackles on a guy (Marano) you’ve been tackling all day, you can’t do that, you have to get off the field.”

Prior to the final drive, Northern had two possessions inside of the MTU 35-yard line to potentially take the lead. After picking up a first down to the 30-yard line, ‘Cats quarterback Drake Davis threw a pass directly to MTU linebacker John Paramski for an interception. An NMU sack by defensive linemen John McMullen and Edward Pierson pushed Tech back inside of the five-yard line to force a punt. Northern had the ball at the Huskies’ 28-yard line with 2:43 left and a second chance to right the wrongs of the last drive. Picking up a first down would’ve set up NMU with the game-winning kick in the final seconds, but three safe run plays led to Daniel Riser’s 41-yard field goal attempt with 1:47 left.

“What happened (on) the possession before?” Nystrom asked. “I b****** at the offensive coaches, I said, ‘you guys better have good ball security here’. Cause I’m not looking at another turnover here, and we’re playing the clock. I don’t wanna be dumb with the ball, because we got down there again and threw a pick. That kind of bites you, you have to learn from your mistakes. When you get a little conservative, there’s usually a reason for it.”

Riser’s kick sailed wide of the uprights and it gave Michigan Tech the ball with 1:42 left for the eventual game-winning drive. The kick started the slide at the end of the game that concluded with everything that went wrong on the final drive, Nystrom said.

“It’s just human nature, it takes the wind all out of your sails,” Nystrom said on the missed kick. “Wouldn’t you rather go up three and play defense and get out of the game? That’s what I’d rather do, that’s what they’d rather do but we didn’t do it. You can’t beat yourself, and you can’t turn it into a one-possession game like we did. We’ve known that all week, so we just got to get better. We’re not quite good enough where we can have those hiccups come up and hurt us. So we have to get good enough where that stuff is overcome.”

To begin the game, both teams traded punts early. However, the Huskies’ offense got a jolt with a 32-yard pass from quarterback Will Ark to wide receiver Darius Willis down to the NMU 18-yard line on their second drive. MTU capped off the drive with a score with an eight-yard touchdown grab from wide receiver Jordan Janssen to score first with 8:20 remaining in the opening quarter. Northern punted for a second straight possession but forced another Tech punt to get the ball at its own 24-yard line.

NMU quarterback Drake Davis led the Wildcats down the field on a seven-play, 76-yard drive, including a 47-yard third down strike to wide receiver Wyatt Davis down to the Huskies’ 13-yard line. Drake kept the ball to the one-yard line and punched it in on the next play and the game was tied with the extra point with 37 seconds left in the quarter.

The second quarter had miscues on both sides, resulting in zero combined points scored. Michigan Tech’s next drive was looking solid with passes complete to tight end Luke Terrain and running back Jared Smith. The Huskies got into the red-zone, but a third down pass to the end zone intended by Jansson was over his head and incomplete. Kicker Drew Wyble came on to attempt a 34-yard field goal, but his kick was no good.

It was NMU’s turn now to move the ball downfield on what looked to be a promising drive. Davis connected with wide receiver Yale Van Dyne for two third down conversions, moving the ball into Huskies’ territory. The ‘Cats tried to pull off a trick play with a reverse, but Van Dyne fumbled the pitch from running back DJ Stewart, and MTU’s defensive back Michael Munderloh pounced on top of it with 5:07 left in the second quarter.

Michigan Tech couldn’t do anything with its good field possession and pinned the ‘Cats back to their own three-yard line. Northern couldn’t move the ball in response, and we were right back to where we started with MTU’s ball at midfield with 3:14 to play in the half.

Both teams couldn’t capitalize on chances late in the half with a missed deep shot between the Davis brothers for NMU, and a fumble in NMU territory for MTU. Fitting enough as it was, it was tied 7-7 game going into the locker room.

The ‘Cats got the ball to begin the second half and were marching down the field. NMU converted three third downs on possession, and it paid off when Drake found Wyatt in the end-zone for a 42-yard strike to give NMU the lead for the first time with 9:47 left in the third quarter.

Drake finished 17-25 for 230 yards for a touchdown and an interception. Wyatt caught five of his brother’s completions for 119 yards and that touchdown. It’s safe to say that Nystrom feels good about the two of them out there together.

“They give us a chance, they made some plays,” Nystrom said. “Wyatt (Davis)’s a great story, we really brought him to Northern because of Drake (Davis). He had some health issues in high school and his career, he’s a good athlete. He’s strong, he’s a big kid, he’s mean and tough, he don’t say much. But those two brothers, they know what each other’s thinking without even talking.”

The Wildcats’ defense forced another punt, and all of the momentum was on their side with a 14-7 lead and the ball at midfield. The drive came down to a fourth-and-one at the Tech 31-yard line, but a false start forced Northern to punt it away. Ark was looking good in the passing game on the Huskies’ next drive, finding Willis and tight end Jordan Dent to move the chains past midfield as the third quarter ended. Faced with second-and-five at the Wildcats’ 30-yard line, Ark tried to force a pass downfield while under pressure, and it was intercepted by NMU defensive back Eddie McGee at the three-yard line with 14:11 left.

The poor field position didn’t help the already struggling NMU offense, and the ensuing short punt gave MTU excellent field position at the 30-yard line. The Huskies got into the red-zone and found pay-dirt with a 10-yard scramble from Ark on fourth down to tie the game with 9:11 remaining. Both teams punted once again, leading to the forgettable final five minutes for the Wildcats.

It’s difficult to explain what continues to happen in this game every year for the ‘Cats, but a curse might not be it. To Nystrom, retaining veteran players to crucial late-game plays is what was on his mind.

“Retention’s always critical at this university and at this football program,” Nystrom said. “When I get that experience, I have to keep them here. I got to do everything that I can do to keep them in this helmet, and to get five years out of them. A third of the schools are playing with seventh year guys, and we’ve got this idea around here to play four (years) and leave. Uh-uh, that’s not college football.  I need to get better experience here so when you get to those situations that you guys are asking me about, you win the play.”

The schedule won’t get any easier moving forward to close out the season for the Wildcats. Facing off with Grand Valley State, Ferris State and Saginaw Valley State is a gauntlet, and it’ll be a tell-tale sign how the ‘Cats will respond from this heartbreaking rivalry game.