‘Cats hockey doesn’t get right bounces in 5-2 loss to No. 17 Notre Dame 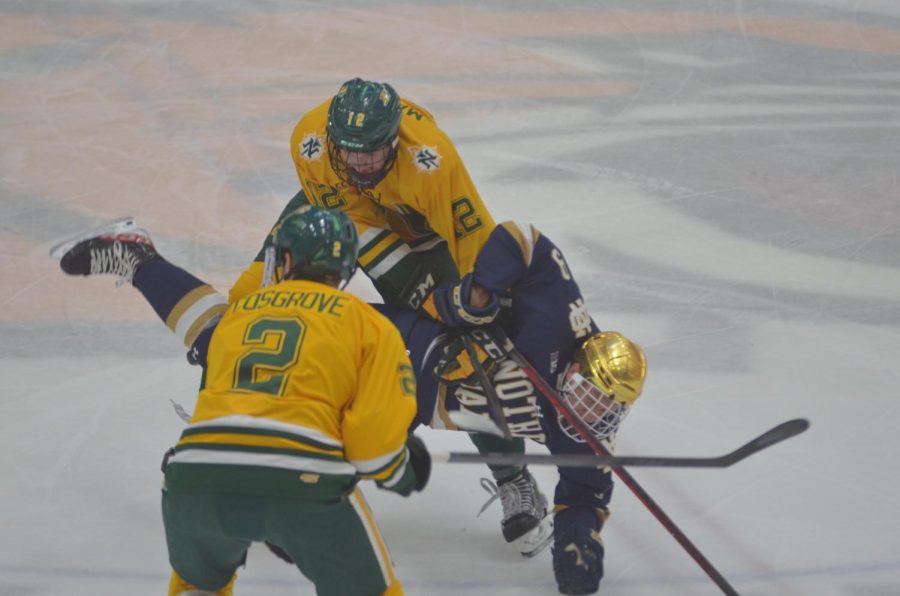 LUCK OF THE IRISH—NMU forward Connor Marritt and defenseman Trevor Cosgrove collide with Notre Dame forward Grant Silianoff in the first period of Saturday night's game. The 'Cats came up short 5-2 against the Fighting Irish, and didn't get good bounces throughout the game. Travis Nelson/NW

When a team loses by three goals in a game, there are plenty of mixed reactions for a coach to have afterwards. In the aftermath of the Northern Michigan University hockey team’s 5-2 non-conference home loss to No. 17 Notre Dame on Saturday night, NMU coach Grant Potulny believed that it just was not their night.

“I actually thought we played very well tonight, I mean maybe as good as we’ve played,” Potulny said. “I thought the first couple goals were just some individual type deals, the third one banks off the glass. We probably didn’t get what we deserved tonight, we had some really good looks but we couldn’t find a way to score. Hockey’s a funny game, sometimes there’s time that you play as well as you probably can and it’s not falling for you, it’s just not your night. On the other side, some of their top guys made plays. It really just wasn’t our night.”

The game was played evenly in the final two periods. Both teams scored two goals each, the shots were even 21-21, Notre Dame (3-0, 1-0 B1G) had five penalties and NMU (2-1, 2-0 CCHA) had four. To diagnose what happened, you have to look at the Fighting Irish’s opportunistic first period.

The game had barely started, and the ‘Cats were already buried in a hole. Notre Dame forward Landon Slaggert’s shot got past NMU goaltender Rico DiMatteo on the rush just 1:47 into the game off of assists from forward Jack Adams and defenseman Jake Boltmann. Northern was outshooting the visiting Fighting Irish for most of the first period, but had several chances go wide or just missed.

Both teams were battling in front of the net, and Notre Dame took advantage with a goal from forward Trevor Janicke off of a rebound. Forward Max Ellis and defenseman Spencer Stastney were there for the assist at 10:40 to extend UND’s lead to 2-0.

In the closing minutes of the period, the puck took a fluky bounce off of the stick of Notre Dame forward Ryder Rolston, and it ended up past DiMatteo in the net for the Fighting Irish’s third goal of the period. This one was at 17:45 and assisted by Stastney and forward Grant Silianoff. Down three goals heading into the first intermission, the Wildcats had a mountain to climb to get back into it.

Notre Dame tried to shut the door completely early in the second period with Janicke’s second goal of the night assisted by Ellis and captain defenseman Adam Karashik. At just 1:34 into the period, DiMatteo’s evening was over, replaced by Charlie Glockner in net. DiMatteo allowed four goals on 14 shots, and was pulled after 21:34 of ice time. The game started getting chippy, and the ‘Cats were starting to come into their own. Countless opportunities were there for the Wildcats to chop into Notre Dame’s lead, but UND goaltender Matthew Galajda was a stalwart in net. Despite having two power plays each in the first two periods, Northern just couldn’t get on the board.

“I just thought it was a physical hockey game,” Potulny said. “The hard part is when you have six power plays, you can’t 0-6. That probably could’ve changed the game a little bit, especially early. But we have to keep working on it.”

Finally, at 16:57, a goal from defenseman Ben Newhouse put the ‘Cats in the scoring column with assists from forwards Hank Crone and AJ Vanderbeck. In the final minute of the period, Crone had a chance to beat Galajda, but a diving effort from a Fighting Irish defender saved a potential goal. Despite trailing 4-1 going into the final period, the Wildcats outshot UND 13-5 in the second and started to clean up the defense to help Glockner out in his first college game. Glockner saved all 19 shots that he faced, and Notre Dame’s only goal scored in his 37:45 of ice time was an empty netter in the final two minutes.

“I thought he was great,” Potulny said. “This is back-to-back games where I thought he’s played very well. He looks calm, he had to make some big saves. Charlie does have big save ability, and giving him a chance to play in a real game, he didn’t let up a goal. He played two periods and didn’t let a goal up, it’s fantastic to see.”

The Wildcats had two more power plays in the third period, but couldn’t convert on either one. The score remained 4-1 for the majority of the period until Vanderbeck came on the ice as a sixth attacker following a delayed penalty, and scored to cut the deficit to 4-2 at 17:15 with assists from defenseman Trevor Cosgrove and captain forward Joseph Nardi. Now the ‘Cats were down by only two, and had a power play. NMU pulled Glockner and had 6v4 for the power play, but Ellis raced for a loose puck for Notre Dame and iced the game with an empty net goal.

“Obviously, the result wasn’t what we wanted, but definitely things to learn from and things to get better with this coming week,” Vanderbeck said. “We’ve got a big conference series coming up and I think it’ll be huge for us to get back to practice, watch ourselves on video and just continue to get better. I think we played a pretty good game tonight, in the end it wasn’t good enough, just didn’t get the bounces but learn from it and move on.”

What these early non-conference games can also do for teams besides improving resumes, is helping them find out about themselves. The ‘Cats have now played three games, and they’ve found out what their team identity is.

“We know what our identity is, we’re a hard working, physical, fast team,” Potulny said. “I think when we stick to that, we’re a very, very, very good hockey team. I like our depth, I like our depth at all of the positions, we got to get a little more healthy on the blue-line. But you know what? I think we got some good pieces and I think that we got to keep grinding and pushing and working because it’s such an important part of the year.”

No. 20 Bemidji State is up next on the schedule for the Wildcats, and the Beavers (1-3) come off of a split with No. 7 North Dakota. The opponent isn’t getting any easier next week, and there’s optimism that NMU will keep building for the end of the year, the mantra that Potulny has used since he’s coached here.

“We’re going to continue to get better and add some new elements to our game,” Newhouse said. “I really like the pieces we have and like I said, we’re building to the end of the year. Unfortunately, we failed tonight but we’re hoping that eventually at some point in the year that the power play’s going to win us a game.”