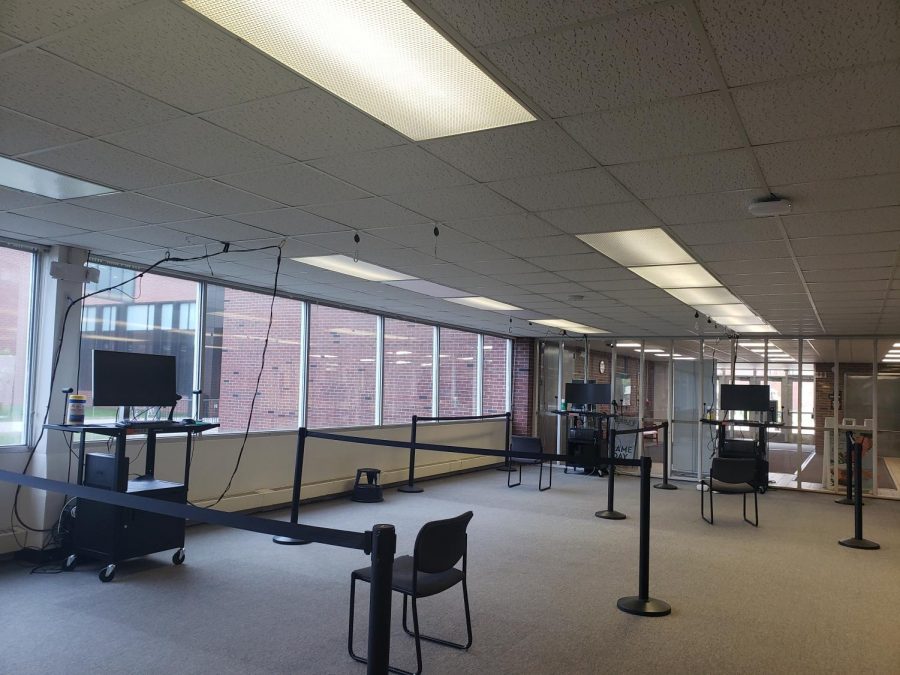 Virtual reality stations in the library are available for students, faculty and staff but are left largely unused. The library is looking to increase awareness about their virtual reality devices and various ways students can use them to fit their interests.

Virtual reality was introduced to the library in the past few years but is still struggling to gain traction.

Kevin McDonough, professor, and reference and electronic services librarian at the Lydia M. Olson Library, describes virtual reality as a technology that is not very familiar but holds great potential for learning.

“What are we [the library] here for? We’re here as a sandbox where people play around with VR,” McDonough said. “Students, faculty, staff — and just get a feel and imagine possibilities.”

For Noah Shevy, a freshman physics major, the idea of virtual reality was intriguing because of its enhanced skills and coordination.

“I found Beat Sabre when I first started playing it. I could barely move my arms around,” Shevy said. “But then, after I played it for a while, it got a lot easier … I was actually one of the top players in the world for a split second.”

Shevy also noted that coordination is not something that can really be taught and learning varies for everybody.

The library offers virtual reality for communities on and off campus through scheduling and requests via their website. With varying tutor availability, virtual reality is open to students roughly 30 to 36 hours a week.

Hiring tutors for the digital media tutoring center, which virtual reality is a part of, can be a difficult process, according to McDonough.

“It’s not just hiring someone to do VR, they also have to help students with media-based projects and video editing and audio editing and stuff like that,” McDonough said. “There’s a lot of people that play games that could do VR but they can’t do video editing, and so I got to have that.”

It is critical for tutors and other staff to be available in order for patrons to access the virtual reality equipment. They are unable to leave equipment available when someone on staff is not working in electronic services, but McDonough assured the hours were shaped around common student tutoring hours that are available on their website.

Even with somewhat minimal access to the virtual reality equipment, the machines have not been as busy as the staff expected. As virtual reality becomes more popular globally, McDonough and other library technicians were expecting a larger increase in student involvement.

“It’s not knock the ball out of the park popular, I don’t know why that is,” McDonough said. “I don’t know if it is [because] people aren’t aware of it, although every tour that comes in here points it out … I’m surprised there aren’t more people coming in.”

The lack of overwhelming student interest could also be attributed to the ongoing COVID-19 pandemic.

“COVID has made a big deal. People are in masks and that can kind of be awkward sometimes,” McDonough said. “When COVID was at its peak we didn’t offer this at all.”

While COVID-19 is still a concern, the library is using widespread sanitation techniques including sanitizing machines and ultraviolet cleaners that McDonough claims provide a higher level of cleanliness. These are used on top of the already necessary procedures the library takes with sanitizing.

Despite the cleanliness and health precautions taken by the library, they are still seeing less attention on their virtual reality equipment than expected.

Harrison Bouche, junior triple majoring in communication studies, multimedia production and computer science, contributes some of this lack of interest to the stereotypes and misconceptions surrounding virtual reality as well.

“I think most people assume that [virtual reality] is for people who are super hardcore into video games. When really … there’s software where you can just go in and talk to people or fitness software, games that are all about dancing,” Bouche said. “It’s really a wide-open field for so many different people to play in, but it has a connotation because it started in video games that it’s only about video gaming, which isn’t true.”

Looking at the future, McDonough is thinking about potential developments and growth within the virtual reality industry and how NMU might be able to incorporate it into education. However, as with all instruction, virtual reality learning starts with the basics and taking the first steps into exploration.

“It’s more about the experience, what is the art like, that’s what we’re about,” McDonough said. “Come and try it out. Our tutors are great at getting you started; you don’t have to know anything. Like how to put the headset on, they’ll walk you through it, they’ll even suggest some starting apps.”