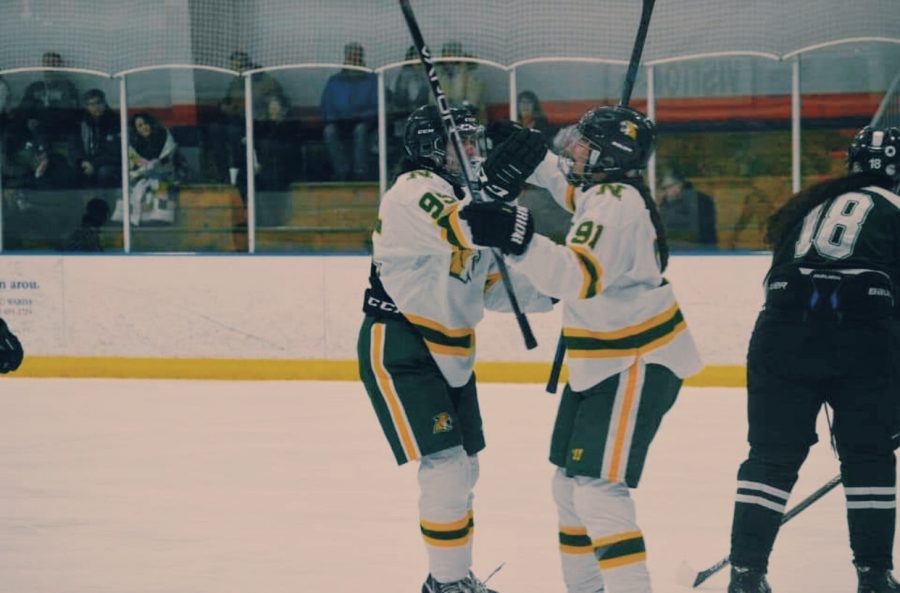 TEAM CHEMISTRY—The NMU women's hockey team looks to improve over the next few weeks before traveling downstate to take on Michigan State on Saturday, Nov. 6 and Sunday, Nov. 7. Photo courtesy of Faith Delgado.

The NMU women’s hockey team is currently in a one month wait between series after battling Lake Superior State two weekends ago until traveling to take on Michigan State in early November.

Northern (0-3-1) has only faced the Lakers so far this season after Bowling Green had to cancel NMU’s homecoming series due to a team emergency. The ‘Cats came up short at home to open up the season on Saturday, Sept. 18, and Sunday, Sept. 19 with 3-0 and 6-3 losses. With the Falcons not being able to play, NMU’s next two games were against LSSU again, but this time in Sault Ste. Marie. The Wildcats tied 5-5 in the first game on Saturday, Oct. 9, but fell 5-3 in the series finale on Sunday, Oct. 10. NMU has had a tough time facing LSSU this season, but the Wildcats had clear adversity to try and overcome.

“I think it was a good series and we learned that we need a lot more work and practice with each other,” junior captain Faith Delgado said in an email. “I don’t think we took it to heart because they get support from their school and their coach gets paid to recruit so they had 30 skaters and three goalies compared to our 11 skaters and two goalies.”

Moving forward, Delgado hopes that the team can learn to trust each other better, and that they can make sure to keep their heads up allowing them to connect, she said. The team doesn’t have the same resources as other programs, but the team has continued to hang in there.

“I think the team is making progress, it is slow but we are definitely getting there,” Delgado said. “I think for having such a short bench and not all the resources we hung in there with them (LSSU) for the most part. I think we can get ’em next time.”

The ‘Cats will finally get to play another team when they travel to East Lansing to face the Michigan State Spartans on Saturday, Nov. 6, and Sunday, Nov. 7. Until then, the team will try to focus on getting endurance up and continue working on meshing together, Delgado said. These two squads have history, and the ‘Cats are hoping that it repeats itself.

“I am excited to see how we match up with them,” Delgado said. “(In the) 2020 season, we beat them to make our spot for nationals, so I hope we still have a good rivalry.”

Game times are to be determined according to the schedule on the Northern Michigan University Women’s Hockey Facebook page.