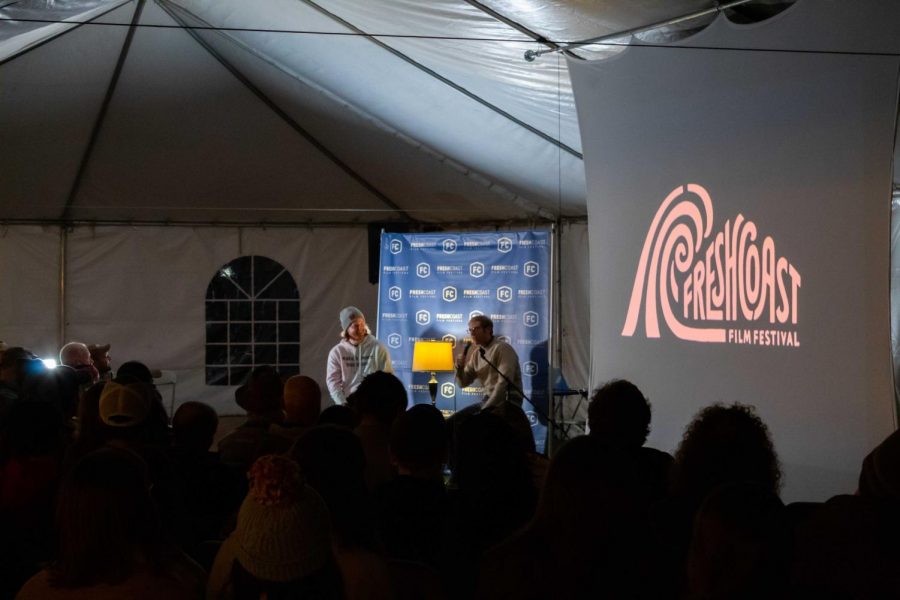 Joe Pera interacts with the audience after the premiere of his new episode of “Joe Pera Talks With You" on Saturday, Oct. 16. Pera's show was one of many shown at the Fresh Coast Film Festival over the course of four days.

The Fresh Coast Film Festival is a documentary film festival celebrating the outdoor lifestyle and conservation of the Great Lakes region, features documentaries with a range of topics from a humongous fungus in a quiet Upper Michigan town to four friends circumnavigating Lake Superior in kayaks.

The Fresh Coast Film Festival was started “to celebrate and build a culture of storytelling of what we believe to be the resilient spirit of the great lakes region. We want this to be a hub for the outdoors and the Midwest and conservation, and we want to elevate those voices and stories,” said Bugsy Sailor, festival co-founder and marketing director.

The festival lasted all weekend from Oct. 14-17 and films were shown all over Marquette at different participating venues such as Mattson Lower Harbor Park and Ore Dock Brewing Co.

The 5th annual film festival boasted record attendance and beautiful weather, having been canceled last year due to COVID-19.

“I think in terms of planning and organizing it was extra stressful to put this one on, which made it more rewarding for as successful as it was,” said Sailor. “It was a lot of work and just a very fantastic weekend, and the weather cooperated which is always a plus.”

Before showing each documentary, the Fresh Coast Film Festival played a land acknowledgement clip recognizing the Great Lakes region as the ancestral homelands of the Anishinaabe people.

The acknowledgement stated, “This is how we choose to move forward: with humility, honor, gratitude and a shared love for this beautiful place and the stories within it.”

While most of the films were centered around nature, some documentaries highlight other ideas.

“We want to share stories of the region, but we also want to expose people to new ideas and new content. If you go to any film block you will find delight or inspiration from subject matter you would not normally seek out,” said Sailor.

An example of this was the Saturday night premier of a never-before-seen episode from the comedy series “Joe Pera Talks With You.”

This film was shown in a tent at Mattson Lower Harbor Park and nearly every seat inside was filled with all ages of people. Many of the audience members traveled farther than an hour to attend.

During the film laughter often filled the tent and a resounding round of applause erupted from the audience when it was complete.

Joe Pera himself was in attendance and after the viewing he went on stage to answer questions about filming his show and the new season coming in November.

On Sunday in the Peter White Public Library, the festival showed a film called “Small Footprints: Crafting an Eco-Lodge in Wild Alaska.”

The crowd was more sparse and quieter than the night before, but that seemed to be expected on a sleepy Sunday morning in a dimly lit room beneath the library. People sipped on coffee and munched on donuts with sprinkles that were provided by the moderators.

The documentary “Small Footprints: Crafting an Eco-Lodge in Wild Alaska” follows a sustainable development project in the remote Kenai Fjords of Alaska.

The project was tackled by Alaska Wildland Adventures and focused on creating a space to appreciate nature while minimizing impact to the environment.

“After having heard the story a few times from Kirk, who was leading the development project, I realized that it was probably a story worth sharing,” said filmmaker James Dagget. “I think that that is a good blueprint that other … development projects can hopefully take inspiration from.”

The intention of this film was to advocate for sustainable building operations using the model of balancing profit, people and environment.

“We are going to keep developing lands. Humanity is still expanding and rainforests are still being depleted. If the mindset of developing … can have sustainability be at the forefront of that, I think that is good for not destroying the planet further,” said Dagget.

Later on Sunday, the Masonic Building blue room played “Our Water,” a film about four friends traveling around the entire coast of Lake Superior in kayaks, directed by Ryan Busch.

The film follows their journey around the lake where they connected with Native tribes and Superior locals, camped in all weather conditions and took water samples to test for microplastics. Their story captures the magic and the beauty of Lake Superior while advocating for its protection and conservation.

“Watching them grow throughout all those months was really interesting,” said Elli Foglio, Marquette local and lover of Lake Superior. “I also thought it was really amazing how much they included the Indigenous people in their film and they really made an effort to be educated and learn more and meet these Indigenous people that are here.”

Foglio said the film highlighted Lake Superior’s beauty and reinforced that her sustainable actions to help the environment are for good reason.

Three of the nine water samples the team in the documentary took tested positive for microplastics, showing that Lake Superior is suffering from man-made pollution.

Brynn Ellisen, senior social work major, said that her biggest takeaway from the film was to be more conscious of single use plastics and decreasing the use of plastic in general.

“I feel like this film festival is kind of like a wake up call to people who may not be paying attention all the time, or the people who are and just kind of get lost in the cycle of their day to day life,” said Ellisen.

Many of the films focused on climate change relating to the Midwest and telling the story of conservation and protecting the shoreline of Lake Superior.

“It is an important value to us to protect these shorelines — protect the beauty and the land of this place — and I think one of the most important things is … that storytelling is what can create a love for this place, and it is that love and appreciation for a place that builds that desire to help protect it,” said Sailor.

The Fresh Coast Film Festival has already announced its 2022 dates which will be Oct. 13-16. They are going to begin planning soon and are always seeking films, filmmakers and volunteers to help year round in the process.