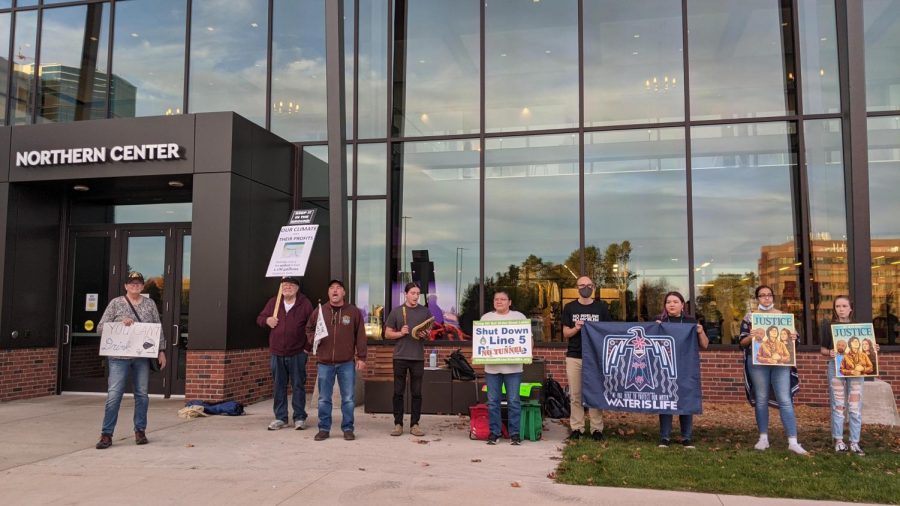 TAKE A STAND—Students, professors and community members gathered in front of the Northern Center on Oct. 19 to protest Enbridge's harmful Line 5. The protest was organized in part by NMU professor Martin Reinhardt.

Our voices echoed off the walls of the Northern Center as men in crisp suits walked past our protest signs saying “Water is life” and “Our climate over their profits.” These men avoided eye contact with us as we protested against Enbridge Line 5. They were heading to a community open house hosted by Enbridge, a Canadian oil transport corporation that owns approximately 17,127 miles of active crude oil pipeline in North America.

The open house ran from 6 – 8 p.m. in the Northern Center and aimed at gathering support from local businesses for Line 5, a tar sands pipeline that Enbridge is trying to rebuild through the state of Michigan, including across the Straits of Mackinac.

The protesters, composed of NMU faculty, students and community members, stood outside of the Northern Center and drew attention to the ongoing threat Line 5 poses to the Great Lakes, global environment and especially to Native communities. As they read from pamphlets stating how Enbridge’s Line 5 had spilled at least 1.1 million gallons of oil over the past 50 years, I decided to stand with them and join in the chants of “can’t drink oil, keep it in the soil.”

As someone who believes in protecting human and environmental rights, the existence of Line 5 contradicts many of my core values.

Line 5 does not value the safety of the people forced to live next to the pipeline.

Line 5 continues to harm the environment, both locally and on a global scale.

Line 5 directly goes against treaties made between the Michigan government and Indigenous tribes, including the Treaty of March 28, 1836 which states, “The Indians stipulate for the right of hunting on the lands ceded, with the other usual privileges of occupancy, until the land is required for settlement.”

The Indigenous communities that live near these pipelines do not only have their access to clean water and fishing rights jeopardized, but their women and children are also at risk. One of the aspects of pipelines that is rarely talked about is the role they play in the large numbers of missing and murdered Indigenous people.

According to the Immigration and Human Rights Law Review, “Since the oil boom, Native communities have reported increased rates of human trafficking, sex trafficking and missing and murdered Indigenous women in their communities.” This is largely due to the groups of men arriving to work on the pipelines and setting up “man camps” where the surrounding areas tend to experience elevated levels of crime and rape. The presence of “man camps” puts everyone in the Indigenous and surrounding communities at risk.

According to The Center for Disease Control and Prevention, “murder is the third-leading cause of death among American Indian and Alaska Native women.”

While these high rates of rape, violence and human trafficking in Native communities are impossible to blame entirely on the “man camps,” the people working on the pipelines are intrinsically tied to these issues.

It is important to consider the holistic impact any pipeline has in the world. Yes, the environmental consequences (oil spills, increased carbon emissions, water pollution, etc.) are incredibly important and should always be brought up in any conversion surrounding pipelines.

However it is also critical to talk about the wider consequences that accompany pipeline construction.

Line 5 impacts everyone, but especially Indigenous communities. Don’t let them stand alone and continue to go unheard, as they have for decades.

To learn more about the numerous impacts and to sign the petition against Line 5, visit oilandwaterdontmix.org.