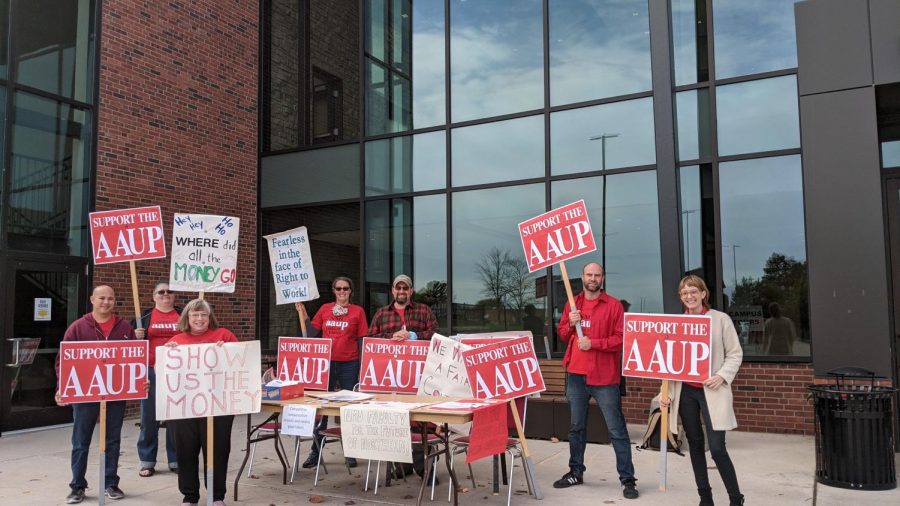 RED IS THE NEW GOLD—Members of the faculty union, AAUP, stand outside of the Northern Center on Friday to protest against the ongoing contract negotiation mediation.

Northern Michigan University’s faculty union, NMU-AAUP, continues to work towards a fair contract as days now cross over the 100-day mark with working without a contract.

Since July 1, 2021, AAUP has been without a contract. Faculty union members have been working under status-quo conditions based on the collective bargaining agreement signed in 2020 for the COVID-19 pandemic.

Within the agreement, faculty union members agreed to take large cuts in compensation to support NMU during the COVID-19 pandemic. These cuts were seen in summer pay, overload pay and professional development funds.

Most recently, AAUP held a protest outside of the Northern Center last Friday, Oct. 22. Members of AAUP rallied outside at their table protesting for a working contract as well as informational picketing.

“We wanted to make sure we had a presence at Wildcat Weekend.” Kia Richmond, English professor and AAUP member, said.

Richmond has been working at NMU for the last 21 years and said that this is the first year that faculty have worked without a contract.

“Unfortunately, we believe that we are being disrespected and that the administration is coming to us not only with lowball negotiation points but that they are, in many ways, creating unfair labor practices and we have filed a lawsuit regarding one of those.” Kia Richmond, English professor and AAUP member, said.

Later that day, AAUP released a press statement regarding the passing of a referendum vote of no confidence in the NMU Board of Trustees.

The resolution passed with a vote of 141 for and 20 against.

“The NMU Chapter of AAUP has no confidence in the ability of the Board of Trustees of Northern Michigan University to oversee and carry out the general supervision of the institution and the control and direction of all expenditures from the institution’s funds,” AAUP wrote. “As evident in the Board of Trustees’ recent handling of executive personnel and ongoing labor relations, this Board has created an environment of chaos and dysfunction which is not conducive to an effective institution of higher learning.”

Jon Barch, assistant professor and AAUP information officer, said that having the vote of no confidence was important.

“This vote was important because it shows that the NMU faculty are extremely disappointed in the behavior of this board and that we care too much about this university to allow the board to continue mismanaging the university personnel and finances,” Barch said.

AAUP press release said that leading up to the resolution, faculty cited numerous facts that resulted in the no-confidence vote outcome.

“The BOT’s poor handling of ex-university president Fritz Erickson’s termination, BOT’s numerous failures during the faculty contract negotiation process, the BOT’s unwillingness to solve serious financial allocation problems at the university, the BOT’s allowing public lies from their top employees to go uncorrected, and the BOT’s movement of critical university resources toward administrative expenses and away from instructional costs, which were already severely underfunded,” AAUP wrote.

Barch said that AAUP and the board have never had a direct relationship so the outcome of the vote has not affected their relationship.

“Some individuals in the AAUP have personal connections with particular board members and those relationships will not be affected,” Barch said. “Oddly enough, the board members as a whole do not seem too concerned with the faculty perception of them.”

In response to the no-confidence vote outcome and press release, the BOT sent out a statement by email through NMU chief marketing officer, Derek Hall.

“The NMU Board of Trustees acknowledges that the AAUP has the right to hold a referendum, but the Board will not be commenting,” the BOT wrote.

“We are working very tirelessly to make sure that everyone knows that our issues are sincere and that we are not just talking about money so we are talking about respect and dignity and voice at the table,” Richmond said.