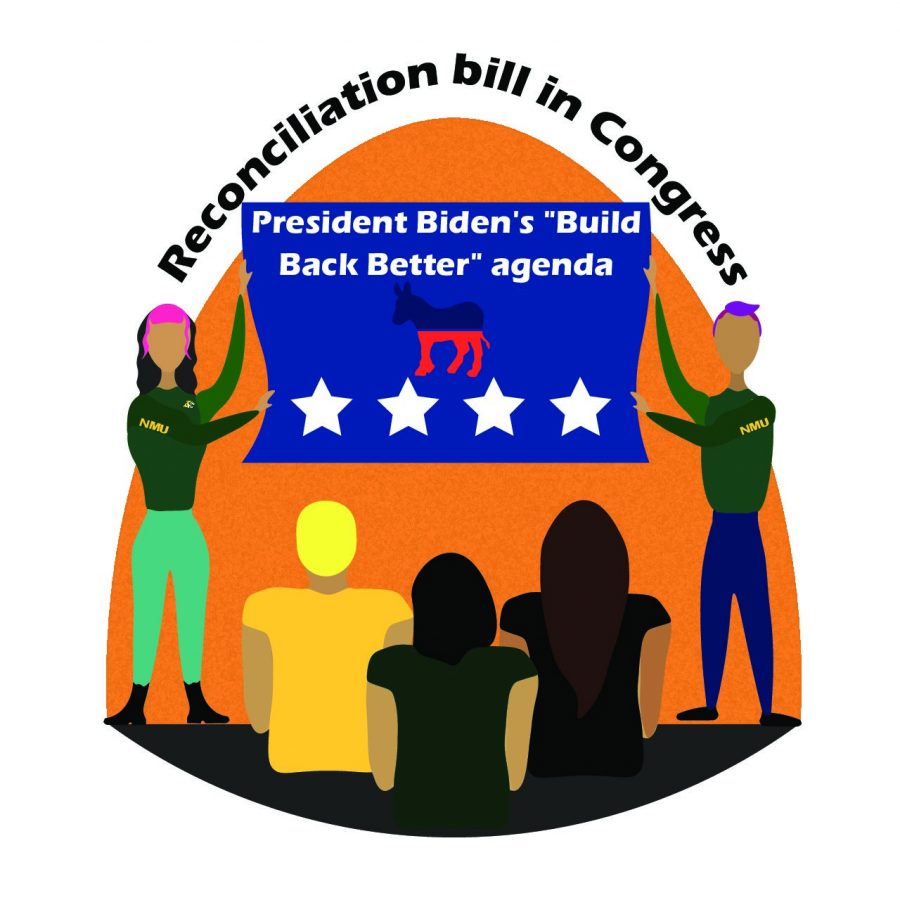 Northern Michigan University College Democrats held a panel that discussed the effects of the upcoming budget reconciliation bill that President Joe Biden is looking to pass.

“Right now, the Democratic Party is trying to pass a massive bill through Congress that will address a lot of concerns about education, climate change and Medicare,” Daisy Lupa, vice president of College Democrats, said. “This requires an affirmative vote from every Senate Democrat. As you can imagine, it’s hard to get everyone to agree on a bill this large and important.”

The information panel was held on Wednesday, Oct. 20 from 7:30-9 p.m. in Jamrich room 1320. Discussions were brought up about how the bill would not only affect young people but students as well.

By having these conversations, Lupa said that the student body would benefit greatly due to students being informed and engaged with politics on campus.

“I think everyone likes to feel informed and engage with their community, both locally and nationally,” Lupa said. “When we hold events like this, students can become informed about and invested in large-scale national politics. Informed students can better understand what they see and hear on the news. They also think about how it will affect their lives and the lives of their loved ones.”

According to Lupa, healthy political debate is something that her organization wants to encourage.

“Healthy political debate is what we are all about. Although we are technically affiliated with the Democratic party, everyone is welcome at our meetings,” Lupa said. “Our membership includes people from everywhere left of center. In our meetings, we try to keep our debates engaging and exciting, but also make sure that our discourse comes from a place of mutual respect.”

Lupa said she feels as though most individuals’ politics are hard to fit on a strictly defined political spectrum and that people assume they have the political stance as their family and friends.

“However, I’ve found that people tend to have really diverse opinions on politics when they break out of the party line binaries and approach each issue as a unique matter. Most people’s political ideologies don’t find neatly on a spectrum, a grid, a compass, a horseshoe or whatever other graphic aid you want to use,” Lupa said. “People tend to be much more complicated than that. I think that should be celebrated and promoted, and it’s what I try to do every day as a politically engaged student here at NMU.”

In terms of other events similar to this one, Lupa said that students should keep their eyes peeled mostly around election times.

“We usually do voting drives, registrations and informative events [on election years],” said Lupa. “In off-years like this [year], we focus on keeping the community informed and engaged through debates and discussions. We’ve been trying to work with other political groups on campus for some debates, so keep your eyes peeled for announcements about when those will happen.”Students interested in joining the College Democrats or attending a meeting can find the organization on Monday nights at 6 p.m. in Jamrich room 1317. Further questions or comments can be directed to the College Democrats via email at [email protected].