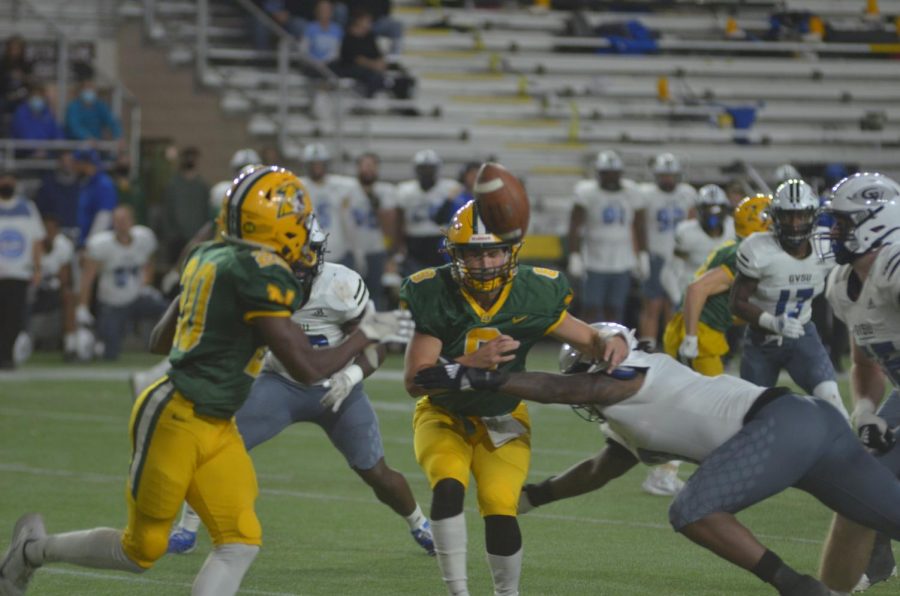 Knocking off the eighth-ranked Grand Valley State Lakers (6-1, 3-1 GLIAC) was going to be a tall task for the Northern Michigan University football team (3-5, 1-3 GLIAC), but the Wildcats gave GVSU a run for their money in a 28-24 loss on Saturday afternoon.

The ‘Cats were going to need a lot of things to go right, and they had a slim margin for error. Northern reached the red zone on six drives for the game, and only found the end zone on two of them. Three drives resulted in field goals, and the other was a fumble by fullback Kyle Sahr at the GVSU one-yard line.

There were a number of bounces that went wrong for the Wildcats and fortunate for the Lakers. What NMU coach Kyle Nystrom was most proud of from his team’s performance had nothing to do with numbers, and it had everything to do with intangibles.

“I’m disappointed in the end with the scoreboard, but I’m not disappointed with my football team or my staff,” Nystrom said. “Here’s what I said before the game to ‘em, ‘I want to see the best effort that you’ve ever given in anything in your life, lay it out there.’ They did that, there wasn’t any lack of effort that I saw when I watched. Second, I wanted them to be as tough as anything as they could be, tough as an old boot, and they were tough. They played tough.”

The game started out about as well as it could’ve for the Wildcats. The NMU defense forced a three-and-out to start things off, and the ‘Cats answered with a field goal to take a 3-0 lead. The Lakers fumbled the ensuing kickoff, and the Northern kickoff unit pounced on it at the GVSU 24-yard line. Looking to avoid another field goal, quarterback Drake Davis’ pass to Sahr was complete on third and goal, but Sahr fumbled as he was hit crossing the goal-line. Grand Valley responded with a methodical 94-yard drive elapsing over five minutes that resulted in a two-yard Bryce Young-Wells plunge for the touchdown with 54 seconds remaining in the first.

NMU started another solid drive, moving the ball inside of the GVSU 10-yard line again to set up first and goal. Davis lost a yard rushing on first down, and threw incomplete passes to tight end Jake Witt and wide receiver Benjamin Loutsis to bring on Daniel Riser for his second field goal of the game to make it 7-6 Lakers. Grand Valley had another long drive with the same ending of Young-Wells getting into the end-zone, and GVSU led 14-6 midway through the second.

The Lakers looked to add to their lead late in the half, but quarterback Cade Peterson’s pass was picked off by NMU safety Brady Hanson and returned into GVSU territory with 2:23 left on the clock. Northern looked solid on the drive until getting inside of the goal to go once more. The Wildcats called timeout with one second left on fourth and goal and came out in field goal formation. Wide receiver Isaiah Popp was the holder, NMU motioned nearly everyone on the outside, and Popp threw the pass in the back of the end-zone to Sahr for the two-yard score as time expired.

NMU went three-and-out to start the second half, and Grand Valley scored shortly afterwards with a 23-yard strike from Peterson to wide receiver Jacob Miller to put the Lakers up for good with 9:24 remaining in the third.

The rest of the quarter was quiet, and the Wildcats had the ball down eight as the fourth quarter began. Another long drive was in the works and into the red zone down to the Lakers’ 18-yard line. Davis was sacked on third down, forcing a third Riser field goal of the game to cut the deficit to 21-16 with 10:16 left. Needing a stop to stay in the game, the ‘Cats’ defense couldn’t get off of the field on third down including a late hit penalty that moved the chains for Grand Valley across midfield. On the following play, GVSU made Northern pay with a 37-yard flea-flicker touchdown from Peterson to wide receiver Jaylon Tillman to get the lead up to 28-16 with only 7:23 to go.

The ‘Cats needed two touchdowns to win the game, but were only able to get one with a five-yard pass from Davis to wide receiver Wyatt Davis with 1:15 left. The drive was 16 plays and over six minutes long, but a quick score was needed. Popp caught the two-point conversion pass to make it 28-24, and it came down to an onside kick that was recovered by GVSU. Young-Wells picked up a first down to wrap up the game, and the Lakers escaped with the win.

Davis completed 24 of 37 passes for 225 yards and a touchdown for the Wildcats. His favorite target was his brother Wyatt (Davis), who caught seven passes for 97 yards and a score. Popp added 58 yards receiving with the two-point conversion catch and his touchdown pass on the last play of the first half as time expired to cut NMU’s deficit to 14-13 at the break.

The ‘Cats’ rushing attack was split between wide receiver Tyquan Cox and running back DJ Stewart. Cox led the way with 85 yards on 14 carries, and Stewart added eight rushes for 22 yards.

Six of Northern’s eight games have come down to a one-possession score. NMU is 3-3 in those games, and even though Saturday was a game that the ‘Cats were supposed to drop, these close games boil down to critical moments.

“There’s some things that we let get away,” Nystrom said. “There’s a few plays where we could’ve scored and we didn’t keep the ball. Or we could’ve got off the field, but we had a silly penalty. When you play these kinds of games, basically all of our games are like this, let’s be honest. They all come down to the last tick, they’re always down to the last drive.”

The road doesn’t get easier to end the Wildcats’ current three-game losing skid, as a trip next week to #1 Ferris State looms.