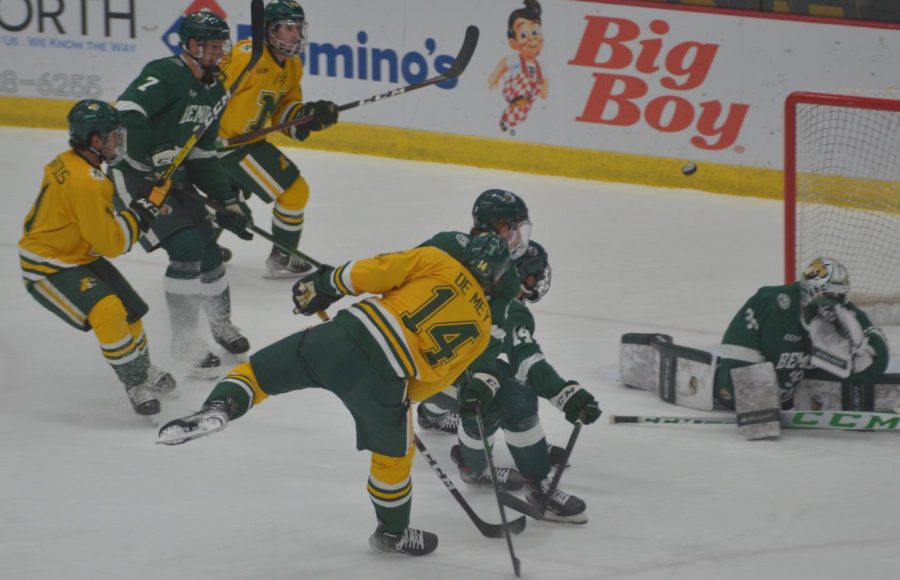 It was a high-scoring series between the Northern Michigan University hockey team (2-3, 2-2 CCHA) and the visiting #19 Bemidji State Beavers (3-3, 2-0 CCHA) that saw BSU pick up two road victories including a 4-3 decision on Saturday night.

After dropping Friday night’s game 5-4, the Wildcats looked to rebound in Saturday’s contest. Things were looking that way when NMU jumped out to a 2-0 lead in the first period with goals from forwards Mikey Colella and Andre Ghantous. However, the game drastically changed with two Bemidji State goals within 50 seconds of each other at 17:35 and 18:25 of the period from forwards Alex Ierullo and Tyler Kirkup.

Ierullo scored again in the second at 16:40 to put the Beavers up 3-2, but the ‘Cats responded on the power play with a snipe from forward AJ Vanderbeck to tie it up at 18:35.

It was a defensive third period, but Bemidji State found an opening off of a puck bounce and forward Austin Jouppi snuck the rebound past Northern netminder Rico DiMatteo for the game-winning goal at 8:49. Neither team had many chances after that, but the Wildcats hit two posts on the game and a great chance to tie it late from forward David Keefer was blocked in front of the net by Sillinger with 14 seconds left to preserve the win for BSU.

The Wildcats controlled the shots 38-27, had fewer penalties than what had cost them the night before, but came up short for the third straight game. Bounces went against Northern again on Saturday, but defensive breakdowns were a major culprit in the defeat.

“You look at the game, last night I talked about self-inflicted wounds. Tonight, it’s individuals just getting beat,” NMU coach Grant Potulny said. “Whether it’s the first two goals, whether it’s a self-inflicted wound on the third, whether it’s something that you talk about all the time on the fourth one. It just felt like 38 shots, it felt like they [NMU] had about 10 scoring chances. You hit two pipes, you miss the net, but I feel like I’m just a broken record, it’s four [goals given up] again.”

To say that the Wildcats’ defense hasn’t lived up to their coach’s expectations would be an understatement. There’s changes that need to be made, and that’ll begin at practice this week, Potulny said.

“Obviously, we have not adapted well to the defensive part of our practices so this week, it’s got to get fixed,” Potulny said. “We’re going to defend, we’re going to compete, I’m disappointed we lost the game, I thought we deserved better tonight. Yes, you want to win every game, but you’re coaching for the end of the year. What we’re doing right now is not going to get it done at the end of the year.”

“Here’s the thing about sports, it’s a team game but there’s individuals within the team that I need to help play better. Like, I need to help some guys play better and I mentioned to the team after that it’s going to be hard coaching this week, there’s going to be hard coaching. Guys are going to have to understand that it’s not personal, but what’s happening on the rink is not good enough. Either I can fix them and make them better, or we have to play other people.”

The offense hasn’t been an issue, averaging 3.5 goals per game will get it done on most nights. However, giving up five, five and four in the three losses . It’s not from a lack of effort however, but the team needs to just stick with it, Ghantous said after the game.

“I mean we’re working extremely hard, some bounces aren’t going our way and it just shows that we need to work a little harder,” Ghantous said. “We’re playing these top teams and kind of shooting ourselves in the foot most of these games. But I think we just need to keep sticking with it, it’s early on in the year. We just need to keep learning from this and we’re being coached to the end of the year and that’s what counts.”

The team’s positive energy and mindset will be important moving forward, Colella said. With another ranked conference opponent #2 Minnesota State-Mankato waiting in the wings, it’s an important factor heading into playing the Mavericks.

“I think it’s definitely huge for us,” Colella said. “I think our energy is what drives us, we’re a high-energy team, we want to play hard, we want to play fast. Especially when the bench is live, we’re probably as good as any team in the country. So I think the matter of keeping the volume on the bench and just making sure that guys are ready to go for every shift and just keep buzzing as hard as we can and working as hard as we can.”