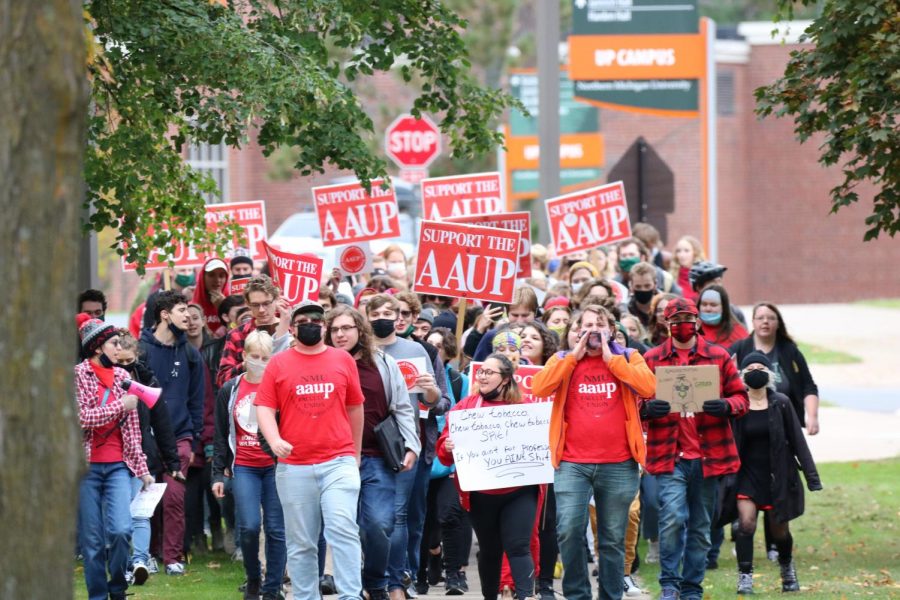 STUDENT SUPPORT—The student organization, Student Supporting Professors, marched on Monday, Oct. 26, from The Woods to the University Center to show support for faculty with their ongoing contract mediations.

More than 300 students, faculty and community supporters attended a university forum on facility proposals and bonding. The forum was preceded by a student-led march supporting faculty who continue to negotiate for a contract after working for 118 days without one.

On Monday, Oct. 25, students were surprised when many professors canceled classes for personal reasons. Many speculated that these coordinated cancellations had much to do with faculty frustration with ongoing contract negotiations with Northern Michigan University faculty union, NMU-AAUP.

Lesley Putman, chemistry professor and AAUP chief negotiator said that the cancelation of classes was not planned by AAUP.

“One person stated that they were planning to take a “wellness” day on Monday, October 25. The person explained that we are allowed to do this, we just have to inform our department office beforehand,” Putman said. “Apparently other people felt they needed a day to re-establish sanity also, so that is how this all began.”

With 24 hours of notice, students organized the solidarity march from the Woods Lodge to the ballroom in the Northern Center. Many wore red to signify their support for the faculty union, NMU-AAUP.

“If my educators are too distracted with this crap, then they cannot give their 110% to educate me, and that is just not acceptable,” Brickel said. “The administration should treat them with respect, give them a good contract and get us our education that we are paying for.”

Both students expressed their feelings towards the ongoing faculty contract mediation negotiations and how they feel professors have been treated.

“Not only are the professors here supposed to be teaching us, but they’re also our friends and mentors, and as such I just want them to be treated as well as possible,” Andres said. “They make our dreams come true, and they should be respected.”

Student marchers met up with faculty union picketers at the entrance of the Northern Center. Many students followed the faculty members into the forum to offer support. At least two police officers were present in the building at the beginning of the forum.

The ballroom was expanded in order to avoid violating fire code by packing too many people into the room.

The issues at play were funding for this project and the project’s ties to the Veridea Group. Administration was criticized for a lack of transparency.

“That’s a huge wad of money sitting around somewhere. Where did it come from? And how are you hoping to get any further donors, if we think you have a lot of money just laying around to buy an old junky hospital? Okay, that’s question one. And I don’t expect an answer,” Terry Delpier, nursing professor, said. “Two, and this goes along with that idea of retention, buildings are not going to reach out to our students. They may look pretty, they’re great places to be…but it’s the people in them that make the connections. And you are starving some of our people. I had the fortune to meet with a partner of one of our current new faculty. They’re on food stamps. That’s how we’re paying them. That’s shameful.”

Following the discussion of the hospital property, Vice President for Finance and Administration Gavin Leach presented plans for investments in university buildings, including the addition of a new building for the College of Business, the demolition of Gries and West halls, the integration of new lab spaces by possibly displacing the Native American Student Association hub of Whitman Commons, rebuilding the Jacobetti complex and redoing the library.

Diverse issues were brought up by students, faculty and community members in response to these plans. Many students and faculty spoke up against converting Whitman Commons to lab spaces, likening the displacement of CNAS and NASA to the history of displacement of native peoples. One professor who spoke out against this move was April Lindala, who said that administration had informed CNAS of this impending displacement on the previous Wednesday.

Some students were concerned about the glass walls on the proposed building being a safety concern in the case of any armed shooter situations. Parking was also discussed, with several students expressing frustration with a lack of parking on campus.

Students and faculty circled back to the issue of contract negotiations, calling for action to be taken to improve faculty retention and student experiences.