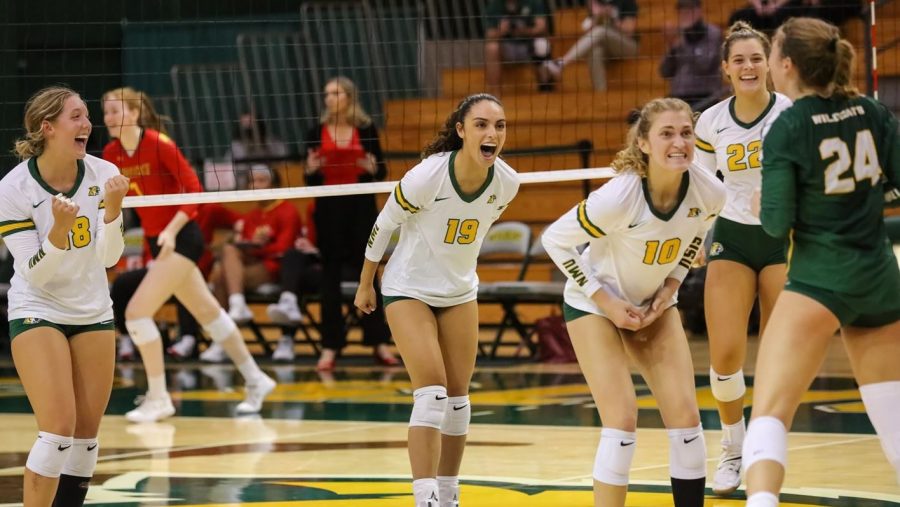 TRYING TO BEAT YOUR RIVAL—The NMU volleyball team celebrates a point against Ferris State on Friday, Sept. 17. The newest edition of the U.P.'s biggest rivalry between NMU and MTU will commence on Saturday inside of Vandament Arena. Photo courtesy of NMU Athletics.

The Northern Michigan University volleyball team is coming in hot into a rematch against the Michigan Tech Huskies at home this Saturday at 4 p.m. inside of Vandament Arena.

Rolling with a three-match win streak from last weekend’s victories against Wisconsin-Parkside and Purdue Northwest, the Wildcats face off against Michigan Tech after suffering a 0-3 loss in their last battle three weeks ago on Saturday, Oct. 9.

Fighting on all three sets due to MTU’s high octane offense, the first set was tied at 25-25 but went to the Huskies after they took two more points. It was followed up with MTU taking the next two sets 25-13 and 25-18.  Feeling more confident coming into this weekend, the ‘Cats are looking to pull off the upset and earn a season split.

NMU currently stands fifth overall in the GLIAC standings and in the North division, while MTU stands at the top spot. Though with new found confidence and motivation plus a lot of learning lessons the team is now more ready than ever to set the record straight.

“With any major rivalry, records aren’t as big of a factor,” Lozier said. “What this team has shown in the last couple of weeks, both in the competition court and in the practice gym, is that they are capable of competing with anybody.”

With the long standing heavy rivalry between Northern and Tech already at full brew since last year’s shutdown at the GLIAC finals, the team already knows they have their work cut out for them in this single opponent weekend showdown.

The Wildcats shut down the Huskies home last year after suffering defeat in Houghton the night prior. When both teams made it to the GLIAC finals, NMU took down MTU 3-0 and crowned themselves champions.

“I’ve played against these people 20 times,” Lozier said of facing MTU’s veteran-laden squad. “We know who they are, we know what they’re going to do. It’s just a matter of slowing them down.”

The athletes themselves prepare for their rivals, knowing full well that they can’t let the Huskies ground them as they did previously.

“Tech kind of dominated the match, we weren’t really able to run our offense that match,” outside-hitter Jacqueline Smith said. “We have made a lot of improvements since that last match so we are definitely ready.”

Still proud of their progress, the spirit of the players is only growing with their renewed confidence while on this hot streak. Last year, the Wildcats went undefeated but suffered on the practice end. Like many other teams the pandemic was a roadblock. Having this year to expand upon both their teamwork and practice has led to deciding moments like this weekend.

“We had a lot to grow team-wise,” Smith said. “We are starting to win games this half of the season and I think you can look at the growth and be proud of it.”

“You want to be the best, you’ve got to beat the best,” Lozier said.