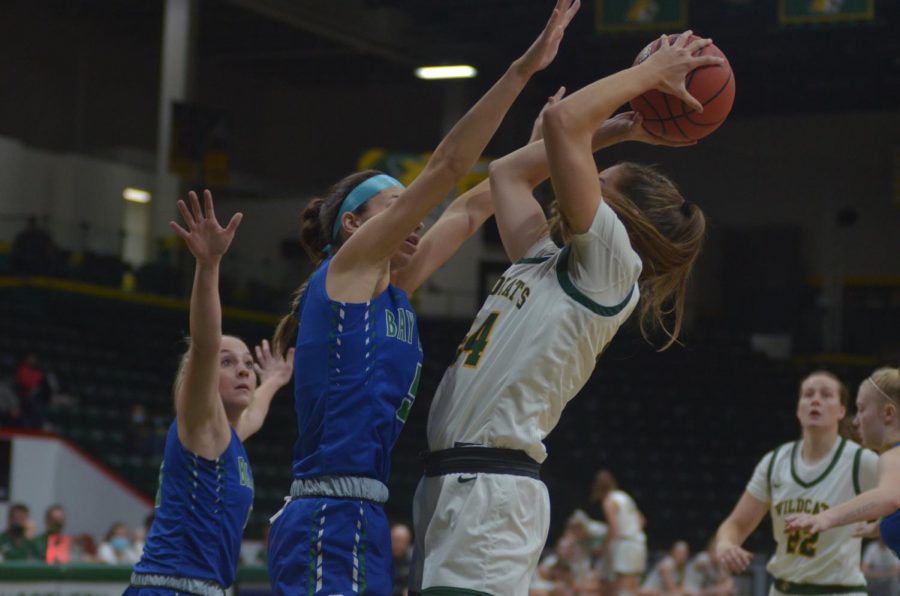 KNOCKING OFF THE RUST—NMU guard Makaylee Kuhn goes up for a contested shot during Thursday's dominating 101-29 over Bay College. The men also picked up a win over the Norse, and both teams begin the regular season in a couple of weeks. Travis Nelson/NW

The Northern Michigan University men’s and women’s basketball teams took the court at the Berry Events Center in front of a home crowd for the first time in 609 days in scrimmage wins over Bay College on Thursday night.

The women’s team cruised from start to finish with a 103-29 win over the Norse, and the men had their work cut out for them early but pulled away for the 82-65 victory.

On the women’s side, the program has been handed over to two freshman point guards CJ Romero and Mackenzie Holzwart. Romero got the start and ran with the first unit, while Holzwart handled the ball for the second group. For both of their college debuts, NMU coach Troy Mattson couldn’t have been more impressed with what he saw from them.

“The big question for me all summer long was, was I going to commit our program to two freshman point guards and could they handle the job?” Mattson said. “I truly believe they wouldn’t be in the role that they are right now if I didn’t believe in them and that they were going to be able to handle this role. I thought CJ (Romero) and Mac(kenzie Holzwart) played great. They’re such good people and they understand how to do things right. They are not afraid, they’ve played in many, many big time high school games, many big time AAU games, they’re not afraid out there. I didn’t really see that at all in them and they were making plays.”

“They really controlled the game for two freshman point guards, if I had to give them a grade, it would be an A, maybe an A-, things we can work on on film about pushing the ball up court a little bit faster and making more plays with people around them. But for the most part, I was very, very happy with them. They’re two great people and they’re going to be great basketball players here.”

NMU’s starting group of Romero, guards Makaylee Kuhn and Elizabeth Lutz, and forwards Elena Alaix and Emily Mueller got the ‘Cats in a comfortable position right out of the gate with a 15-3 lead. Northern led 19-6 after one quarter and had contributions from the second and third platoons that came in. NMU didn’t look back in the second half, holding the Norse to only one point, and led 51-7 at the break.

The bench saw a lot of minutes in the second half, and a lot of scoring production too. Guard Andrea Perez had an electric third quarter from beyond the arc, and her 13 points led the team in scoring and to a 79-20 lead after three. The fourth quarter was no exception of dominating, as NMU outscored Bay 21-9 in the final quarter to hit triple digits in the 74-point win. Following Perez in scoring was guard Madigan Johns with 12 points, forward Alyssa Nimz with 11 and center Ana Rhude with 10.

“It was fun, it was nerve-racking at first but once we got into it, I mean a lot of the girls were really supportive and helpful,” Romero said. “I mean, I thought we did well, we handled ourselves well. We listened to coach (Mattson), played our roles and went from there.”

Bay College had a tough time handling NMU’s cross screening and athleticism, Mattson said. However, the ‘Cats’ success can also be attributed to not turning the ball over and the Norse not having a chance to scout, he added. Even with some things to work on after an impressive performance, Mattson is confident in where his group stands thus far.

“This is a really good group of young women,” Mattson said. “They want to be good, they’re going about it the right way, and it’s just in time I think, as we start to understand how to play consistently every single night and not have any let-ups, the sky’s the limit for this group.”

Someone who isn’t feeling as good as Mattson is NMU men’s coach Matt Majkrzak after an 82-65 win over Bay College. Though the ‘Cats won by a large margin that was maintained all throughout the second half, Northern made a lot of mental mistakes in the season-opening scrimmage, Majkrzak said.

“I didn’t love it, I thought we didn’t play very well,” Majkrzak said. “It was nice to get to play someone else and I thought what they (Bay College) did is exactly what we needed. We just didn’t share the ball the way we wanted to, I thought we played hard but we didn’t always play smart. I guess that’s what you get in the first game, normally you do these things (scrimmages) behind closed doors, but we wanted some people in there. Getting back to the Berry (Events Center), we were chomping at the bit. I think what we learned tonight was we weren’t ready for that, and that was not the product that I think what our product’s going to be when we get into the first actual game. We got a lot of room to grow.”

Newcomers were also the story on the men’s side, as three starters- guards Nick Wagner (Bemidji State) and Brian Parzych (freshman) and forward John Kerr (St. Ambrose)- are new to the program this season. Wagner led all scorers with 20 points, with Kerr and freshman forward Dylan Kuehl each adding 12 and guard Tre Harvey putting up 10.

“It definitely felt good to play again,” Wagner said. “The first game of the season is always very exciting, a little bit of excitement, a little bit of jitters. We played okay tonight, definitely could’ve played better. Just looking forward to practice tomorrow and just continuing to get better.”

The game was played pretty evenly at the beginning with NMU up 17-13 through eight minutes. However, that was as close as Bay would stay as the ‘Cats’ three-point attack started to get going from the likes of Wagner, Harvey and guard Max Bjorklund. The Wildcats also controlled the glass, and Kuehl cleaned up an offensive rebound as the buzzer sounded to put NMU up 49-31 at the half. The second half was almost even in the scoring department with the Norse outscoring Northern 34-33 in the 20-minute frame. However, the ‘Cats held their lead and never felt threatened.

The ‘Cats shot 40.8% from the field overall compared to Bay’s 33.9%, outrebounded the Norse 50-36, and outscored them in points in the paint 34-20. The statistics just like the score show a clear Wildcats’ advantage, but 14 turnovers among others talks to the miscues that Majkrzak felt after the game. Part of that can be attributed to all of the moving parts- 7/13 players who logged minutes are new to the team- that had their Wildcat debut.

“I thought everything that happened tonight for us that went bad, was more mental than physical,” Majkrzak said. “I know the effort’s there and I know we have good players, I just don’t think we were all in sync and all on the same page and I guess it’s what you expect out of having a new team.”

The men are back in action on the road against Lewis University at 8 p.m. on Friday, Nov. 12, while the women host William-Jewell University at 1:15 p.m. on Saturday, Nov. 13.