Editorial—Students will be heard, one way or another 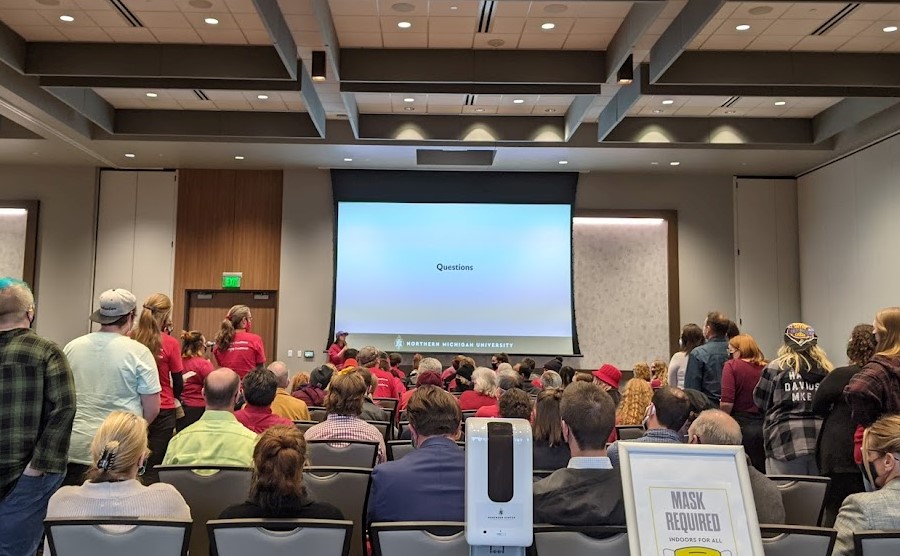 QUESTIONS?—Long lines of students, faculty and community members stand before microphones at the Oct. 26 university forum. So many people were in attendance that the room was expanded to meet fire code.

Recent events on campus, such as the abrupt termination of former president Fritz Erickson, the ongoing contract dispute between faculty and administration and the vote of no confidence in NMU’s Board of Trustees have resulted in quite a lot of anger among students. We saw this anger expressed last week Tuesday, Oct. 26, when the administration held a forum to discuss investments in facilities. North Wind reporters on the ground at the event witnessed the frustration of our peers first-hand.

NMU’s administration has certainly been blind to many of the issues which are important to students and faculty at this university.

Student and faculty comments directed at speakers at the forum were often met with disinterest, silence or blatant evasion. Comments received the same treatment during the BOT meeting on Thursday Oct. 28. when blank-faced trustees multitasked on their computers as students and professors made impassioned pleas for improvement.

The administration at NMU have demonstrated a lack of awareness and a refusal to be in touch with the needs of students and professors. The removal of former president Erickson seems to have changed nothing in regard to the administration’s conduct. We remain in the same untenable situation that we were when Erickson led the university: our faculty have no contract, our finances spark questions and our voices go unheard.

At the forum, many criticisms were focused on the university’s lack of transparency in decision-making. This became particularly evident as questions came up regarding a move to turn Whitman Commons, an important gathering space for the Center for Native American Studies and for the Native American Student Association, into lab spaces. Apparently, this move was done without consulting CNAS, and was also a surprise to several science professors at the forum. Communication about this particular issue was subpar at best. Still other issues raised similar concerns.

The momentum behind this explosion of student frustration has been building for years. Behind the scenes, the administration has continued to make questionable decisions without allowing any questions to be voiced. However, at the recent forum, our peers demonstrated their cohesion. It was a call to action for our leaders to be held accountable for poor planning and decision-making.

We were pleased to see so many students taking part in public discourse and providing feedback to the university. We hope that students remain invested in decision making processes of the university and that they continue to show up to represent their own interests. Particularly powerful at this was the student backing of our professors who are struggling to obtain a fair contract. Students showed up for professors, just as professors always show up for us.