Jazz band performs everything but “The Kitchen Sink” 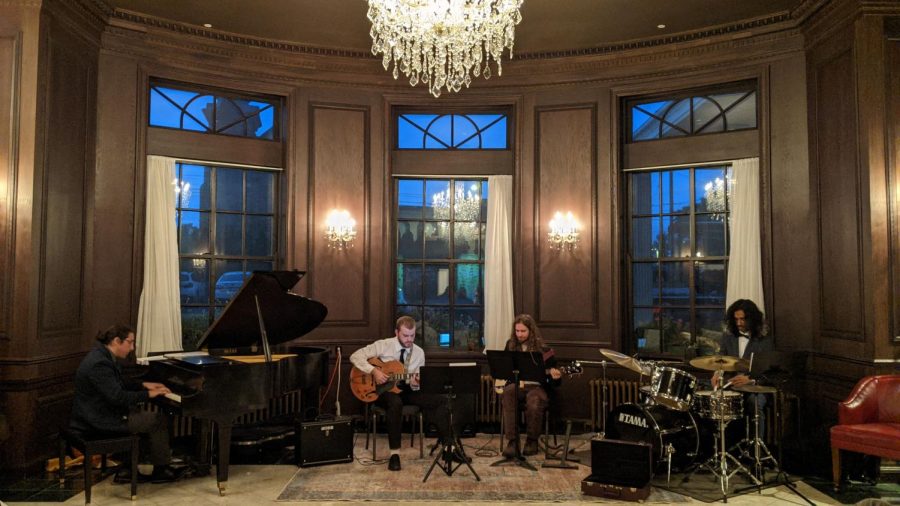 EVERYTHING BUT THE KITCHEN SINK - "The Kitchen Sink" performs in the Landmark Inn lobby on Friday, Oct. 15. The band plays free jazz, covers of classic jazz songs and a few originals as well.

Rishi Prasadh, senior medicinal plant chemistry major, had been hosting jam sessions, playing in a few bands and exploring as many musical opportunities as physically possible during his college career, but over the summer Prasadh was looking for a new outlet.

“[I am] always trying to find something new and I was in a band since my freshman year. It was more of a heavier kind of rock band, and I guess I got tired of playing that type of music,” Prasadh said. “Just playing the same kind of music that I thought everyone else was making. I wanted to bring something new to town.”

He ended up meeting Antonio Caballero, a University of Michigan Flint graduate with a bachelors in music education, and their musical styles seemed to work together right away.

They decided to start a jazz band together and brought on Brennan Brooker, post-baccalaureate medicinal plant chemistry major, to play bass and Nicola Falco, junior psychology major, to play guitar and vocals. Caballero took the piano and Prasadh rounded out the quartet with drums and percussion.

The four of them together created what would be known as “The Kitchen Sink.”

“I just thought of that phrase ‘everything but the kitchen sink’ and I thought that kind of encompassed our vibe pretty well because we’re very different people with very varying tastes in music,” Prasadh said. “We’re trying to bring that all together in a little bit of a melting pot and create something out of that.”

The band started playing regular gigs in June 2021 at the Delft, Superior Culture and Landmark Inn, as well as a few house shows.

“When I was starting this project, it wasn’t even something that I viewed as gaining a whole lot. I saw it mainly as a way to scratch my musical itch and to improve myself as a musician, practicing the technical aspects of being a musician,” Prasadh said. “The gigs just kind of started happening and we went with it.”

During the summer and early fall, the band performed around one or two gigs in a week when they could make the time. As school and work started to pick up, their performance schedule condensed to two or three gigs every other weekend.

Besides scheduling performances, the members of “The Kitchen Sink” also have to fit practice times into their busy lives.

“Usually we practice twice a week. It can become a lot with school and everything,” Prasadh said. “We all either work or go to school, or in some cases both. We just try to get together when we can, it usually ends up being in the evenings on Tuesdays or sometime during the weekend. Sometimes we just use our gigs as opportunities to get some more practice in.”

Scheduling can get tricky, but one of the more difficult parts of keeping a cohesive band is combining four unique people and with different talents into one vision.

“Coming to a common ground with everyone’s musical goals is sometimes a little bit of a challenge because we all have different goals for what we want to do with this project,” Prasadh said. “Finding a place to meet and there’s a lot of making sacrifices, a lot of working with other people and compromising on what you want to do together, because ultimately we want the sound we make to be a single sound.”

Occasionally, “The Kitchen Sink” will create their own sounds completely from scratch and compose an original song. However, the sets tend to lean more on jazz standards and their own variations of classic songs.

“Writing an original is a lot more time consuming and a lot more difficult than just learning a standard. When it comes to writing an original, sometimes we’re all in the basement like ‘alright, let’s write something’ and then we have to pull the chords out of thin air and create the idea and then we all have to go in together on it,” Falco said. “That can take a lot more time than it does to be like ‘alright, this is the standard. This is what we’re learning, come back with the chords memorized and we’ll work on the arrangement order together.’”

Some of their standards include an arrangement of “Stormy” originally by the Classics 1V and “Blue Bossa” originally by Kenny Dorham. The members of “ The Kitchen Sink” enjoy creating their own interpretations of jazz tunes, but also love to disregard the chord progressions and play whatever feels most authentic to them in that moment.

“I definitely think free jazz drives a lot of the energy behind this band. Sometimes we’ll get into a zone,” Falco said. “Free jazz is basically just like having a conversation with music and playing pretty much whatever and trying to make something coherent out of it.”

Caballero finds this improvisational aspect of playing jazz with “The Kitchen Sink” freeing and a welcome break from his other musical commitments. Caballero currently plays trumpet in the Marquette Symphony Orchestra and performs with the Marquette City Band and The Westerly Winds as well.

“I think my favorite part of being in this group specifically is probably the freedom to take ensemble risks. Majoring in classical piano, every note has to be perfect. Everything about your hands, your posture,” Caballero said. “I think being able to have the freedom, in a place like this where I can just hit a wrong note and be like ‘okay but what if it was right though’ and then just hit it over and over again until now this is the note we’re playing. I think that’s a really awesome feeling, being able to take big musical risks, take jumps, lead to somewhere where I don’t know what that’s gonna sound like, but I’m gonna do it anyways.”

That musical freedom within jazz gives “The Kitchen Sink” a unique feel, even when they are performing sing along classics like “Just the Two of Us” originally by Grover Washington Jr and Bill Withers.

“The fun thing about jazz standards is that since people have been playing them for like 60, 70 years, everybody still can find a way to do their own interpretation of it,” Brooker said. “In a lot of cases, we’re still reading music, in a sense. We’re following specific chord changes, but what’s fun is that we’ll throw in our own rhythmic variation or sometimes we’ll take out a whole measure or put in extra measures in and mess around with things.”

As the band members experiment with rhythm, chords and melodies, they can get into what Falco calls a “flow state” where they seem to be playing together on another level.

“Since we play together more and more and as we grow as a band, I think there’s these times, either during gigs or during practices, where time doesn’t feel real and we are all communicating with each other,” Falco said. “I’m not just listening to the melody trying to keep up with the song, or I’m not just listening to the drums trying to keep on beat, or the bass trying to comp with him, I’m listening to all three of them at the same time, and we’re all achieving a conversation.

What makes the achievement of this unified connection even cooler is the fact that each band member is at a different stage in their musical journey. For Falco, playing guitar is something he has done nearly all his life, but rarely in a professional setting.

“I haven’t had a lesson on guitar, even with this band. I’m not a jazz guitarist either. So, when they asked me to play, I’ve just pretty much been trying to teach myself as much as I can,” Falco said. “Just the basics of jazz guitar and trying to expand my musical vocabulary.”

Other musicians like Prasadh have been experimenting with many instruments for years and decided to take lessons in order to improve their own musical skills. Joining “The Kitchen Sink” was a catalyst for Prasadh to start drum lessons and then have an outlet to practice his craft.

“I just love that I’m finally at a point where I’m seeing myself make tangible improvements in my playing. I started taking drum lessons just because I wasn’t happy with how much I was progressing while I was in this group,” Prasadh said. “That was something that motivated me to push myself even further and get better and having that accountability to the band and to myself to create the best sound I possibly can.”

To encapsulate their progress and identity as a band, “The Kitchen Sink” has been entertaining ideas of recording some of their best songs and creating custom merchandise for their band. They are also doing more advertising and playing house shows as far away as Houghton.

“We did talk about wanting to potentially record something at least before we part ways, just to have something that we can call the culmination of our work together,” Prasadh said. “I know Nicola was talking about printing some shirts, getting some merch going. So we have a lot of cool ideas.”

While they do have ideas for how to move forward with their group, they are aware that time is limited. As members of the band prepare to graduate and potentially go their separate ways, they try to hold onto every moment and play the best shows they can.

“Now that I’ve been playing with ‘The Kitchen Sink’ all summer at all these shows and just the feeling good after the shows, it’s hard to imagine life without that now already,” Falco said. “A lot of the times when we practice, I’m already dreading the day that we have to split up, if we ever do, because we’re growing our different ways.”