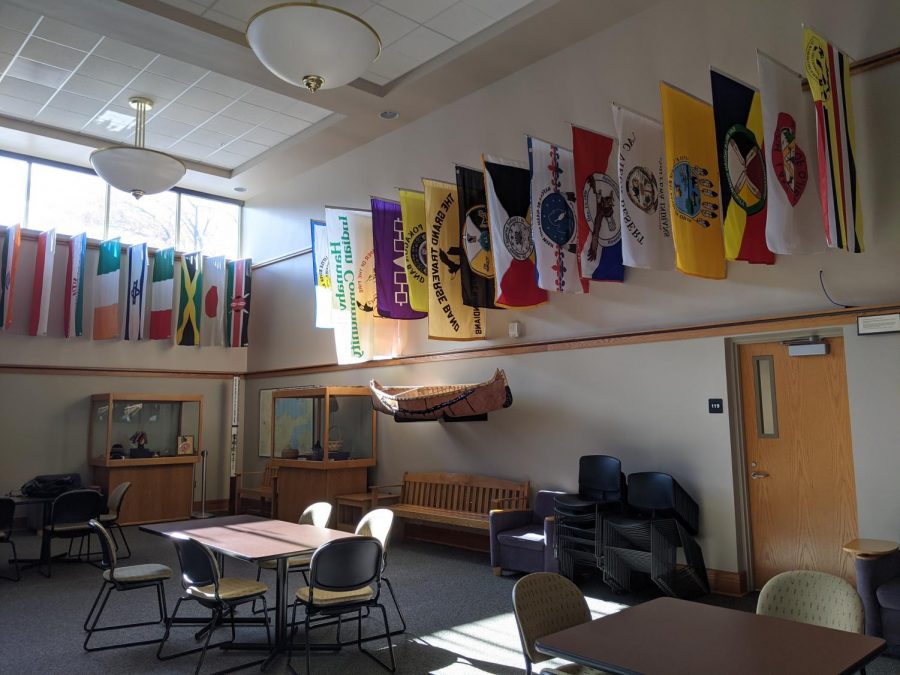 GATHERING SPACE—The Center for Native American Studies and the School of Education use Whitman Commons as a social lab space to learn how to create community, Department Head Joseph Lubig said.

Among several issues which surfaced at the Oct. 26 university forum attended by more than 300 faculty, students and community members, one was the possible repurposing of Whitman Commons for lab space.

Science departments on campus have been desperate for resources and especially lab space, so the administration suggested the possible transformation of “underutilized spaces” into labs. Several students and professors from the Center for Native American Studies spoke out at the forum against this use of Whitman Hall.

“When I have given tours to visitors, prospective students, I’ve called it the living room of the building; it is so comfortable for an academic setting,” Lindala said. “I always discuss the many special guests, elders-in-residence, concerts, poetry readings, tribal law conversations, and countless other programs and projects [there]. We have memories on the walls and of course, as many noted, the tribal and international flags are on display. It may be impossible for a non-Native to truly understand what it means for a tribal citizen to see their flag on display.”

According to Lindala, CNAS faculty and staff were informed by their department head, Dean and Director of Education, Leadership and Public Service Joseph Lubig about the possible utilization of Whitman Commons during their monthly meeting on Wednesday, Oct. 20. Lubig had just found out about the news himself. This news received immediate pushback from CNAS faculty, Lindala said.

Lubig said that the administration did not initiate a discussion with him on the idea.

“In all fairness to the administration, I’ve only been in the interim dean’s position since early October,” Lubig said. “But there was not a discussion with me as a department head for the School of Education or the Center for Native Studies, and I don’t think that’s unusual. I think part of it is, let’s put in writing what we think we want, and then let’s start talking about the things we put in writing so that we have something to critique and to look at and to reject, alter or act upon.”

Lubig said that he is hopeful that Whitman Commons will not continue to be seen as an “underutilized space” given its importance to CNAS and the School of Education.

“That space isn’t underutilized to us,” Lubig said. “What’s been reassuring to me over the past couple weeks is our interim provost, Dr. Kapla, and our interim president, Dr. Schuiling, have clearly expressed, ‘Whoa, slow everything down, this is a big idea discussion. We need to talk about all of our options and the voice of programs that utilize Whitman Commons are critical in all these discussions.’ So I’m feeling confident, because I trust both of those folks, that we will be part of the discussion. I think the hard part for people to see is that we utilize that space often.”

“That is a big reason we are looking to try to do this as an addition to Weston Hall and not impact that facility. We have been hearing that message, and we’re definitely looking at alternatives,” Leach said at the Oct. 26 forum.

Leach has not yet responded to a North Wind request for further comment.

Interim president Keri Schuiling explained that alternatives to the use of Whitman Commons are being explored to meet the needs for science lab spaces.

“I was not involved in the original planning but I do know that the sciences need more lab space. However, when I learned that there was some thinking (there, to my knowledge was never a decision made) about using Whitman, which I learned from Jud Sojourn who sent me an email, I met with our CFO Gavin Leach and Provost Dale Kapla to express my concern and requested another space be identified,” Schuiling said. “To my knowledge, that is the goal: to find alternate space. At the forum, we tried to make it clear that many of the planned renovations identified were at the beginning of the planning and design phases, not the end.”

Professor of Native American Studies Jud Sojourn spoke out against the repurposing of Whitman Commons at the forum. Later that week, he said he does not think it is likely that the administration will pursue the plan due to student pressure. He said he worries about what might have happened if not for the student’s presence.

“What if there hadn’t been student pressure at the meeting?” Sojourn said. “They just didn’t think of us, I think that is what happened.”

Sojourn said that issues such as that with Whitman Commons are distractions from the work CNAS has been doing to raise awareness of Indigenous issues such as missing and murdered Indigenous women and residential schools.