Hockey and football both fall to highly-ranked conference opponents 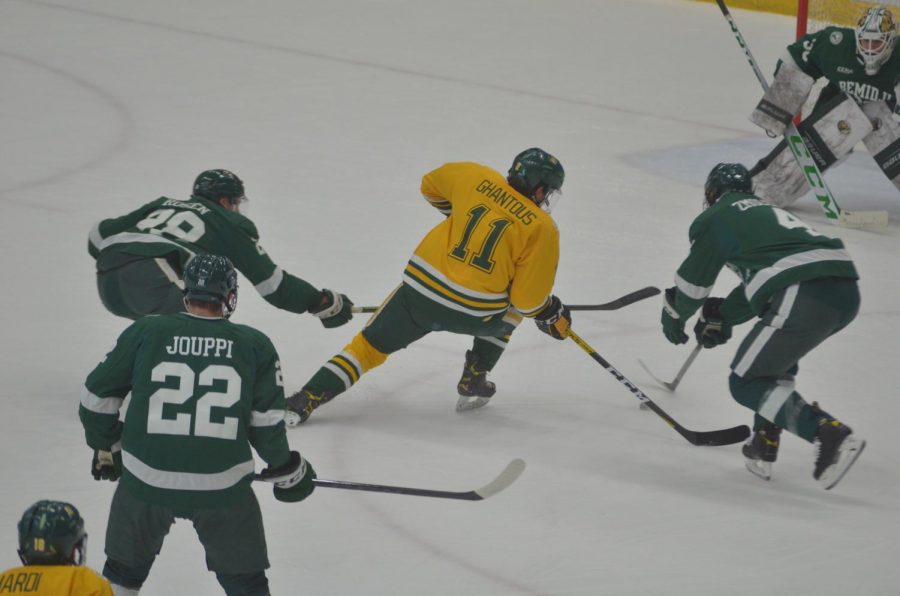 GETTING BACK ON TRACK—NMU forward Andre Ghantous carves through the Bemidji State with a goal on Saturday, Oct. 23. After losses to highly ranked opponents, both the Wildcat hockey and football teams try to find wins this weekend.

The schedule wasn’t very kind to Northern Michigan University athletics this past weekend, as hockey dropped both games on Friday and Saturday night on the road to No. 2 Minnesota State-Mankato, and football fell to No. 1 ranked Ferris State on Saturday afternoon on a trip downstate.

NMU hockey’s losing streak extended to five games with two losses to second ranked Mankato. The Wildcats (2-5, 2-4 CCHA) hung around in a 4-2 loss on Friday but were blanked in a 7-0 loss in Saturday’s series finale.

Forwards Mikey Colella and Vincent de Mey scored goals for NMU in Friday’s loss, but the ‘Cats were outshot 47-18 in the game. Saturday’s game quickly got out of hand with four first period goals from the Mavericks. In what went wrong, NMU coach Grant Potulny mentioned that the same defensive issues that have resulted in this losing streak showed up against Mankato.

“First time in my career, I’ve heard about this before, throwing the tape away,” Potulny said about Saturday’s game. “I never understood why people didn’t watch it, and this is the first time in my career that I didn’t watch the game film. There’s nothing I was going to learn from it, there’s probably some areas that we may have even played better in than on Friday, but it was kind of a microcosm of the things we’ve talked about in this press conference for three weeks. Defending, keeping pucks out of our net. I think on Saturday, all of those things that we’ve been worried about and talked about showed themselves.”

The ‘Cats are looking to get back on the winning side of things this weekend at 6:37 p.m. on both Friday, Nov. 5 and Nov. 6 at home against Boston University. NMU defeated the Terriers in the 1991 national championship game, and the Wildcats play BU again for the 30th anniversary.

NMU quarterback Drake Davis finished 13-21 passing for 143 yards and an interception, and he scored the first unit’s only touchdown with a one-yard rush in the third quarter. Quarterback Zach Keen came into the game for NMU when it was out of hand, and was productive in his opportunity with two touchdown passes to wide receiver Tyquan Cox.

Running back DJ Stewart ran for 79 yards on nine carries including a 62-yard dash in the first quarter. Cox also contributed in the running game with 12 carries for 21 yards, but he made his biggest impact in the fourth quarter with his two touchdown grabs.

NMU coach Kyle Nystrom was glad to see his second unit get some time despite the loss, and hopefully, they aspire to be what they saw against the top-ranked team in the country physically and mentally, he added.

The offensive game got going in the fourth quarter, but what presented trouble for the ‘Cats was the prolific offense of the Bulldogs. Despite gaining 298 yards of their own, the Wildcats were nearly doubled with FSU’s 572 yards. Bulldogs quarterback Jared Bernhardt completed 10 of 14 passes for 154 yards and an interception, but he was most effective on the ground as Ferris State’s leading rusher with 17 carries for 163 yards and three touchdowns. All in all, Ferris totaled 374 rushing yards compared to NMU’s 105. Nystrom said he hadn’t felt that helpless in a game of defense since his days as a grad assistant at Western Michigan when the Broncos had to go up against No. 1 Florida State.

“That game was a tale of two different cities,” Nystrom said. “Our offense, alright, we scored 24 points on a very good football team. We were more productive on offense against Ferris than we were in a long time. But on defense, we got absolutely dismantled. They can play Division I-AA football right now, they can play I-AA competitively with that offense, they’re legit.”

The team continues conference play at 1 p.m on Saturday, Nov. 6 on the road against the high-powered offense of Saginaw Valley State.