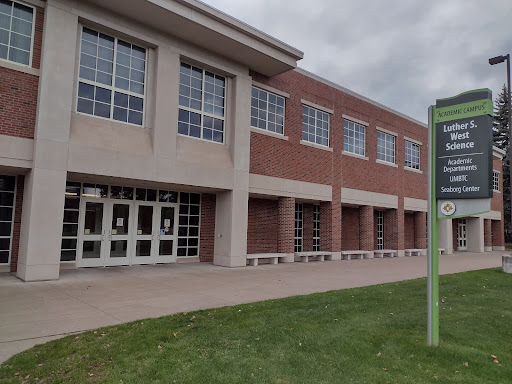 Luther West, the namesake of Northern Michigan University’s West Science building, located in the Academic Mall, is under scrutiny after university historian, Dr. Russell Magnaghi, uncovered a past in the eugenics movement of the early 1900s.

As the namesake of West Science, West has an extensive history at NMU. He was first a professor of biology, then the department head of biology and at the end of his work was the dean of the College of Arts and Sciences.

However, despite this dedication to NMU, there has been recent concern about his past in the 1900s eugenics movement. Kerri Schuiling, interim president of NMU, addressed this in an email to the NMU community.

“This is very disturbing history and I agree with those I have heard from that the campus building that bears his name, West Science, needs to be considered for renaming,” said Schuiling.

Eugenics, at its simplest, means the study of how to arrange reproduction within a human population to increase the occurrence of heritable characteristics regarded as desirable according to Oxford Languages.

The term was coined by British scientist Francis Galton in 1883. He theorized that humanity would improve if the fittest members of society were encouraged monetarily to have more children.

Unfortunately, this devolved quickly into the early 1900s eugenics movement, Nazism, the sterilization of anywhere from 25% – 50% of Native American women in the 60s, and the 1930s Tuskegee experiment.

Considering how eugenics devolved into racially motivated genocide, sterilization and cruel experiments, it is important to discuss how West was involved in it.

Magnaghi provided several documents, such as an interview about West’s work with Battle Creek College, a report written by West for the “Conference on Race Betterment” in 1928 and NMU’s college bulletins from 1917-1960.

According to Magnaghi, West was a professor of biology and eugenics at Battle Creek College. The college was funded by the Race Betterment Foundation, which was spearheaded by John Harvey Kellogg. The foundation’s purpose was to find a cure for “racial degeneracy.”

In addition to teaching at the college, West contributed to the third conference held by the foundation by writing “The Practical Application of Eugenic Principles” found on pages 91-117 of the conference proceedings.

In this application, he discusses the Fitter Family contests that were put on by The American Eugenics Society at state fairs.

According to the University of Richmond, these contests were extremely successful, convincing multiple generations of wealthy white people of western European heritage all at once of their own genetic superiority, helping to further elevate their feeling of status over the poor, uneducated and people of other racial backgrounds.

Among the 26 white families documented 18 males were given an award for “excellence and superiority” and only nine females were given the same award, meaning males were 2x more likely to receive the award. However, he does argue the discrepancy “may be explained” because 36 boys were examined versus the 26 girls.

In addition, West said, a very logical criticism of this method of determining an individual’s fitness for parenthood may be made on the grounds that it provides no way of arriving at the actual genetic constitution of the individual.

While this can be argued as evidence for West’s opinion on eugenics, it is not an outright denouncement of the eugenics movement.

“I even hope now that somewhere there’s a statement that he made an interview that we don’t know about, that said ‘I reject the whole study of eugenics.’ but I haven’t seen that,” said Magnaghi.

In regards to NMU’s bulletins from the 1900s, one can see the evolution of the class title. In 1917 which predated West’s time here, the course was labeled “Heredity and Eugenics” and served as a basis for an understanding of the “modern eugenics movement”.

In 1940, while West was the department head of biology, the class was labeled “Genetics and Eugenics.” Its description detailed the class as studying “the laws of dominance, segregation, independent assortment, and linkage” along with the “application of genetic principles in the improvement of the human race.”

By 1960, the department dropped the term “eugenics” from its class name altogether and changed it to the “Principles of Heredity” which had emphasis on Mendelian Laws, the nature of genes and population genetics.

NMU will likely continue with the renaming process via the “Renaming Due to Conflict” section of their naming policy which states, “The University reserves the right to withdraw from a naming agreement if the name of an individual or organization, which has been bestowed upon a property, facility or program, comes into disrepute in the University or in the general community.”

In the email Schuiling addressed to the community she stated she asked Cindy Paavola, assistant to the president, to convene a group that will discuss potential candidates for the renaming.

“Northern can’t change what events may have taken place here historically, but we can use what we learn about our history to make the present and future more equitable and respectful for all who engage with the University,” said Paavola.

Paavola hopes to recruit retired and current history/science experts, a couple of administrators from NMU, and students to serve on the committee.

“Did Dr. West teach about eugenics because the University asked him to do so to cover the science classes being offered at that time or did he actively support eugenics and if so, to what level and in what ways?” said Paavola. “We feel confident that reviewing his writings, which are part of the Lydia Olson Library’s collection will give us definitive evidence of his stance on eugenics.”

While the committee begins to take form, stay tuned by keeping an eye out for emails from [email protected].

“We [NMU] do not see one type of individual as more valuable or more perfect than any other type of individual. We certainly don’t believe that any one group of people should have the right to determine what are desirable or undesirable traits in others,” said Paavola.