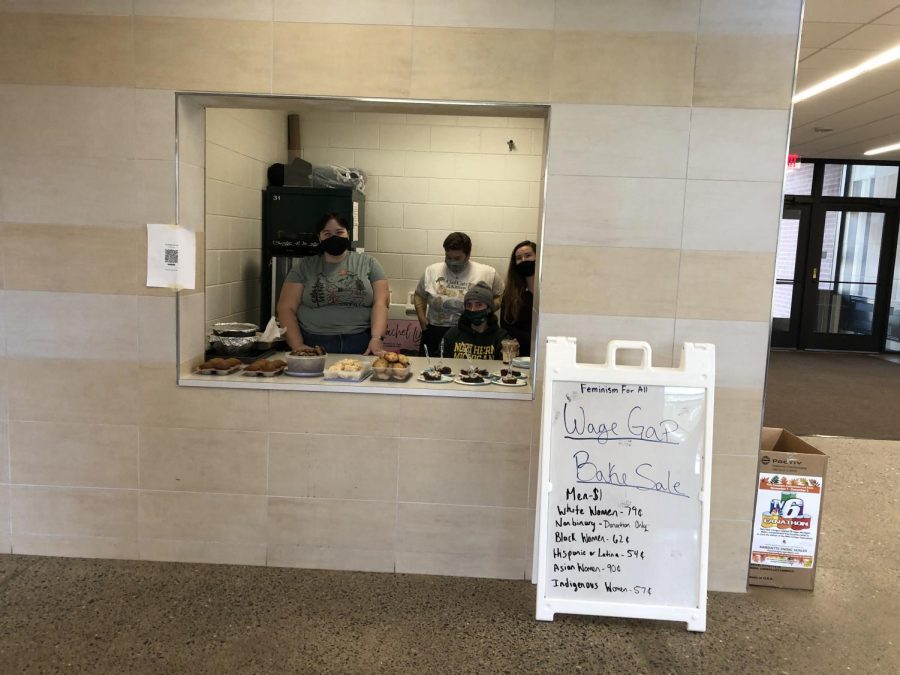 Members of Feminism For All sell homemade baked goods such as banana muffins, vegan chocolate chip muffins and rice crispies. The price differences for each patron emphasized the disproportionate wages people are typically paid based off of their identity.

In Jamrich, many students lined up for Starbucks to start another day when the smell of muffins, cookies and Oreos wafted over from the ticket booth only a few steps away. A white board listed prices: $1 for men, 79 cents for White women, 62 cents for Black women, 54 cents for Hispanic or Latino, 90 cents for Asian women and 57 cents for Indigenous women.

The Wage Gap Bake Sale on Tuesday, Nov. 2 is an annual event held by the student group Feminism for All that seeks to spark discussion and thought by selling cookies, muffins, and more. The prices were taken from the average wage statistics the group found from the US Department of Labor.

Gwen Feamster, a sophomore and political science major and the vice president of Feminism for All, said that the goal of the group was to advocate for civil rights for all groups. For every dollar a man makes, a woman only makes [82] cents, and for people of color it just decreases despite it being 2021, said Feamster.

A consistent stream of curious faces kept rolling in while on their way to class. Along the booth’s countertop was banana bread muffins, standard and vegan chocolate chip cookies, Rice Krispie treats, and Oreo frosted brownies, all made by various members of the group, and all on display for potentially hungry students to admire and purchase.

In the past, Feminism for All was called Women for Women and was focused on women’s rights specifically but have since expanded. One of their other main events is the annual Slut Walk. Feamster’s main job, she said, is to reach out to people not on campus, set up certain events like a yoga session to encourage body positivity, and help with promotion and planning of events, such as the Wage Gap Bake Sale.

Ali Deutsch, a sophomore majoring in public relations and political science, was one of the bakers as well as one of the members who ran the sale. Not only is the bake sale a way to encourage discussion, it also serves as a fundraiser for Feminism for All to continue holding events just like this one, said Deutsch. Her favorite part was talking to people during the sale,

“One of my favorite comments I heard today was from a guy who came pretty early on in the day. He loved the idea even though he hates that he has to pay more, but that’s the whole point of it,” said Deutsch.

The bake sale went from 11 a.m. to around 3 p.m. and though they opened an hour later than what was initially planned, that didn’t stop students from stopping by, picking up something for their sweet tooth, and maybe making a comment about the price differences.