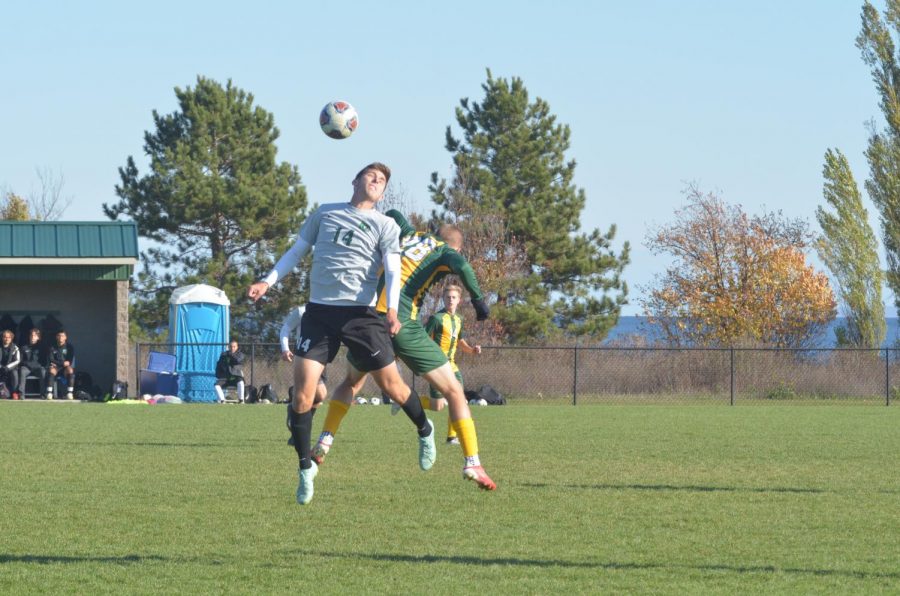 ONTO THE POSTSEASON—NMU midfielder Logan Lazar and UW-Parkside's midfielder/forward Nikola Kesich go up for a contested ball during Thursday's match. The 'Cats fell 3-0 in the regular season finale, and will face Saginaw Valley State in the first round of the GLIAC Tournament on Monday.

It wasn’t how the Northern Michigan University men’s soccer team wanted to close out the regular season, but the Wildcats were shutout by visiting Wisconsin-Parkside 3-0 on Thursday afternoon.

NMU (4-10-3, 4-8-2 GLIAC) was limited to three shots on the afternoon against the GLIAC co-champion Rangers, and only had two of them on goal. Parkside (13-3-2, 10-3-1 GLIAC) was playing for the #1 seed in the GLIAC Tournament and earned it by capitalizing on scoring chances.

“I think they (UW-Parkside) took their chances well and finished on them,” NMU coach David Poggi said. “I mean (there were) a couple of things where we could’ve made better decisions where we could’ve been a little bit tighter defensively, but I think it was (that) they were clinical on their finishing. Parkside is a very good team and I wasn’t surprised that they came to play to win and give everything they had.”

The Rangers had 22 total shots for the match and eight on goal that tested Wildcats’ goalkeeper Jonas Vorbau. NMU had an early scoring chance that could’ve changed things, but forward Kyle Reilly’s shot was saved by Parkside’s Alexandre Durand at the 13:59 mark. UW-Parkside made the ‘Cats pay by scoring first at 30:53 with an unassisted goal from team scoring leader forward Rade Novakovich. The Rangers took the 1-0 lead into the half.

Trailing the conference’s team wasn’t going to be easy to come back against, especially when Parkside extended the lead to 2-0 with Novakovich’s second goal of the game at 52:07 with an assist from midfielder Matteo Quintero. Northern made a goalie change from Vorbau to Jackson Bowers a few minutes later, and the Rangers got a shot past him in the final minutes. Quintero scored the goal with only 2:19 left in the match to seal the deal and clinch the first overall seed in the conference’s postseason tournament.

Northern is also in the tournament despite ending the season on a two-match losing streak and will be the sixth and final seed. From now until Monday’s first round match against third seeded Saginaw Valley State, the focus completely shifts.

“Everything is focused now on the tournament, it’s one and done if you don’t do the job,” Poggi said. “We had a couple of guys get knocked up today a little bit and hopefully we can get them back, we’re gonna use the next few days to get ready, but we’ll give it everything we can. We’re looking forward to it.”

Northern and Saginaw Valley met up twice during the regular season, resulting in a SVSU 3-0 win in University Center on Friday, Sept. 17, and a double overtime 0-0 tie in Marquette on Sunday, Oct. 17. Heading back on the road to square off with the Cardinals on Monday, it’ll be the first elimination game in the college career for a lot of Northern players.

“Right now, we’ve just got to refocus on everything and get ready for the tournament,” Poggi said. “For a lot of these guys, it’s their first year. They don’t even know what to focus on, they don’t know what’s to be done. We’re going to concentrate on the things that win you games and hopefully we’ll do that on Monday.”