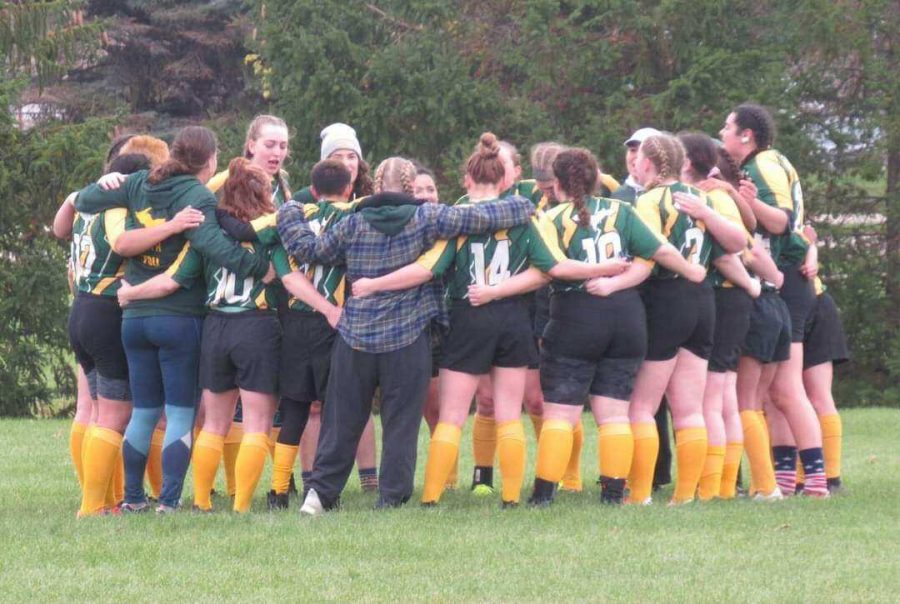 REGIONAL RUGBY—The NMU Northstar rugby team huddles up during an earlier game this season. After defeating the University of Chicago 43-0, the team heads to Elkhart, Indiana for the Midwest Regionals this weekend. Photo courtesy of Rachel Placeway.

The Northern Michigan University women’s rugby team has made its way to the Midwest Regionals after claiming the Great Lakes Conference championship.

NMU became conference champions after a 43-0 win against the University of Chicago on Sunday, Oct. 31. Never letting Chicago get past them and denying every chance at even a single point, the team’s confidence is continuing at an all time high as they advance.

Regionals will be held at Elkhart, Indiana on Nov. 13-14 and will host teams from different conferences across the Midwest. If they can win two matches, the team will go onto the National Collegiate Rugby championships in the Small College division in early December in Atlanta.

“We thought this would be a rebuilding year,” President Rachel Placeway said. “COVID hit us hard and we now have a new veteran player on our team. But making it this far has been a huge confidence booster for us.”

The team previously made it to Regionals in many of the players’ freshman year back in 2018. With so many of the players being seniors, two years of dealing with the pandemic and building a new team, the Northstar rugby squad is back in the fight.

“Rugby is a very tough game when you have to play for 80 minutes without stopping,” Placeway said. “You have that tired threshold and you have to push through that just to finish one game. And this last weekend we saw every player do that.”

The dynamic of the team is split by a difference of new veteran players but the team shares a family connection like no other. The season may have started with a bit of stress for the more experienced players, but they now have full confidence in their new teammates.

“It was nerve racking throughout the year,” captain forward Kaitlyn Bammel said. “So many of our new girls just started and we were carrying the team. It really showed this last weekend how much they learned and how far they have come.”

The team now filled with confidence, moves on into their next set of challenges at Regionals.

“This [past] weekend shows how far we can go,” back Chance McDougal said. “If we keep rolling with the momentum we are riding on right now we are going to be successful.”