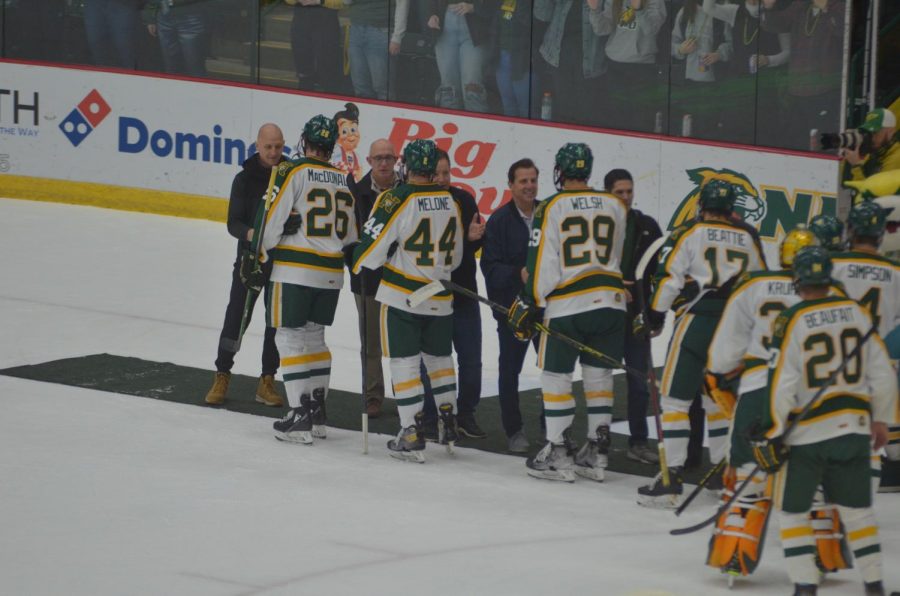 The 1990-91 Northern Michigan University hockey team won the national title with a 8-7 triple overtime win against Boston University on March 30, 1991. The 2021-22 NMU Wildcats welcomed BU for a weekend series, posting 5-3 and 6-2 victories. Channeling the offensive capabilities of the team 30 years ago and averaging 5.5 goals in two games is quite the way to honor them.

With six of the title team’s members in attendance and the current ‘Cats’ players wearing retro jerseys with numbers and names of the past players, it was a very cool moment inside of the Berry Events Center on Saturday. The buzz heading into it was unprecedented, but the excitement inside of the arena wasn’t.

The NMU crowd always feels energetic, but something really felt different for the second game. Was it the reunion of the members of the ‘91 team? Maybe. Was it all of the goals scored against a struggling Terriers’ squad? Possibly. To me, it felt like a history lesson on what this program used to look like, and what it continues improving to be.

“What we could do as coaches and players was try our absolute hardest and our best,” NMU coach Grant Potulny said. “One weekend obviously isn’t going to encapsulate a national championship, what they were able to accomplish. Having some players back in town, getting to know them and speaking to them, and some people that couldn’t come, just text messages and things that were received. I think, all in all, it was a successful weekend.”

Northern needed this weekend, they needed to see a high scoring output, great special teams play, and keep the other team to a lower total in goals. There was also the pressure for the current players of having to actually wear the former players’ names on their backs. The team overcame this, and also got two wins that they really had to get.

“To be honest going into Saturday, there’s a little bit of nerves because I think as a player, you’re always representing yourself and your own personal pride and your program pride, but when you’re representing somebody else’s name and to start the game, I think we were a little bit nervous,” Potulny said. “But as the game went, I thought we got into the game and played very well. It was a really important weekend for a lot of reasons.”

Potulny confirmed there was a nervousness about wearing those jerseys, and that’s because of what those names mean to the folklore of Northern hockey.

After having what was all around a successful weekend as Potulny, and I agree with him, it will be telling to see if NMU can keep the momentum rolling with Michigan Tech coming up this weekend. However, even with how important playing the Huskies is, this past weekend is going to live on forever. Winning in front of the home crowd is always fun, but winning the way they did while also having members of the title-winning team in school history in the building, is special. In honoring the 1990-91 team, the 2021-22 team couldn’t have done it better.