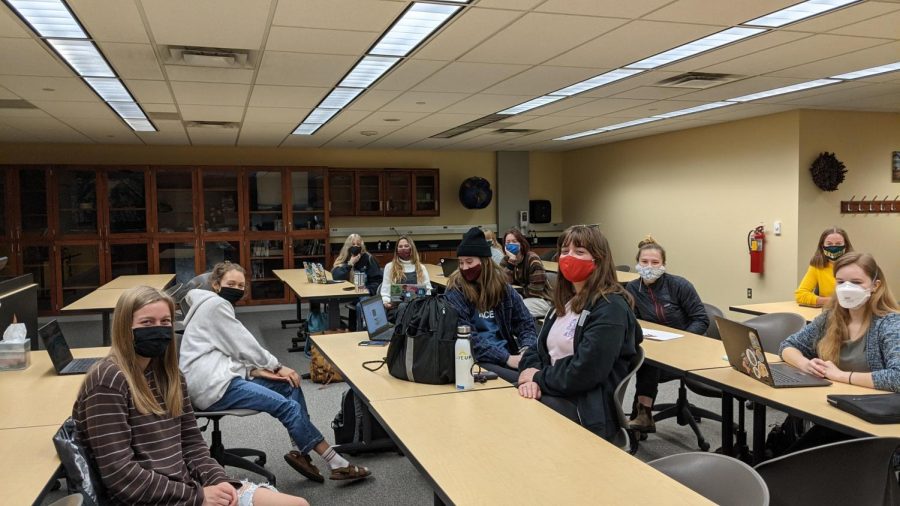 Students in the Divest NMU organization meet to discuss future ways to increase awareness of fossil fuels on Nov. 9. Their current efforts include a petition to support NMU's complete divestment from fossil fuels, an informational table in Jamrich and posters.

Last month, a group of students banded together to form the Divest NMU organization which provides a platform for them to convince NMU to divest from fossil fuel companies and develop more sustainable campus policies.

One of the students in Divest NMU is Laura Whipple, a first-year biology graduate student who was involved in a successful fossil fuel divestment campaign at the University of Illinois at Urbana-Champaign. Whipple has been an instrumental part in helping other NMU students develop plans for increased awareness and support for their divestment initiative.

Currently, the group is circulating a petition around NMU and the Marquette community to provide the power of community backing when they present their ideas to administration.

“This petition is the first step in getting NMU to divest from fossil fuels and demonstrates that fossil fuel divestment is popular amongst the NMU community,” Whipple said. “To me, the show of support that comes from campus members signing this petition indicates that the broader NMU community cares about climate change, and one crucial step in addressing climate change is pulling support from fossil fuel companies.”

For Zoe Tardy, fourth-year environmental science major, signing the petition is an important step in moving away from fossil fuels completely and protecting the environment as well as underprivileged people.

“Not only is it contradictory and hypocritical to have investments in fossil fuels while also being committed to carbon neutrality, but we also all know that the fossil fuel industry is threatening life as we know it. This is absolutely not an exaggeration, and I think it’s common knowledge at this point,” Tardy said. “Not only does it threaten life as we know it, but it does so unjustly, affecting developing nations, communities of color and women disproportionately.”

Being a part of the divestment from fossil fuel movement not only benefits the underrepresented people locally and globally, but it creates more dramatic change than individual sustainable choices. Molly Miller, third-year social work major and environmental studies minor, joined the Divest NMU club to expand her impact on the environment.

“Before when I was focusing so much for myself, sometimes it just felt so lonely, like I’m the only person trying, even though I know there were some other people,” Miller said. “But in divestment, there’s so many divestment clubs all across North America and across the world amongst universities, and so it just feels a part of something bigger.”

NMU’s divestment club is a part of a growing movement of divestment clubs across college campuses in the US. Many colleges have a growing divestment organization or have an administration that has taken the initiative to start divesting from fossil fuel companies.

Divest NMU’s plan is to take this issue to the administration and Board of Trustees to gain their support and urge them to start divesting from fossil fuels as soon as possible. The petition they have circulating around campus is a part of their proposal which will also include potential green companies to reinvest their money in.

“The point of the petition is to … say ‘Look how many people at NMU support divestment,”’ Miller said. “This is something that we should be supporting, especially as students. This is what we’re putting our money into, and we don’t want our money going to fossil fuels and climate destruction. Getting as many people as we can to show their support and show the university that [fossil fuels] is not something that the faculty, students and staff and NMU support anymore.”

A large reason the community is supporting the petition is concern for the natural environment and Lake Superior which is already seeing changes in temperature, water levels and increased invasive species due to climate change.

“The fossil fuel industry has a huge impact on the climate crisis which directly affects our futures as well as Marquette’s environment which is a huge reason many of us love going to school here,” Maggie Bailey, second-year environmental science major, said. “We hope that NMU can join many other universities in divesting from fossil fuel corporations and then reinvest that money into renewable energy corporations.”

One of the challenges facing the divestment plan is financial feasibility and expertise, but according to Marley Wolff, third-year environmental studies and sustainability major, it is now more economically sound to divest in fossil fuels than continue to support a dying industry.

“If this was happening a few years back I would say that the most difficult part of divestment would be proving that it is financially worth it. Although now it is actually cheaper to be sustainable,” Wolff said. “For example, in the year 2020 alone climate related disasters cost the US $95 billion in damages. On a large scale, we are only costing the country and the world more time, money, and resources by not divesting from fossil fuels and changing how we get energy and view the natural world.”

In order to make NMU’s fossil fuel divestment a reality, they will need to hire specialists in the field of environmental sustainability and finance, according to Whipple. It is important that when NMU removes their money from fossil fuel companies that it is reinvested in reliable green companies.

All of these decisions can be made by the institution, which is another reason why divestment is a feasible solution for lessening the continued effects of climate change.

“A lot of people are worried when it comes to climate action that there’s going to be a lot of government control and infringing on their life. I just want to emphasize that divestment is a free market solution to climate change,” Miller said. “It’s not making rules for what you can or can’t do. It’s just pulling our money out of the bad guys and into the green stuff. If you are someone who is worried about climate change, but also worried about government control, this is a really great movement for you to support.”

While the petition has been receiving digital signatures from students, Divest NMU is always looking for more people to support the movement and increase awareness. They are hoping to start having information sessions in Jamrich and post meeting times on their Instagram account, @divest_nmu, for those who are interested in becoming more involved.

“I really hope this petition gets students thinking about where their money is going and propels them to demand change from our university,” Wolff said. “Personally it angers me that NMU’s biggest marketing technique is the beautiful nature we are surrounded by, yet none of their investments are going toward protection or conservation of the environment. Instead, they are investing in fossil fuel companies that are destroying these nature preserves worldwide.”