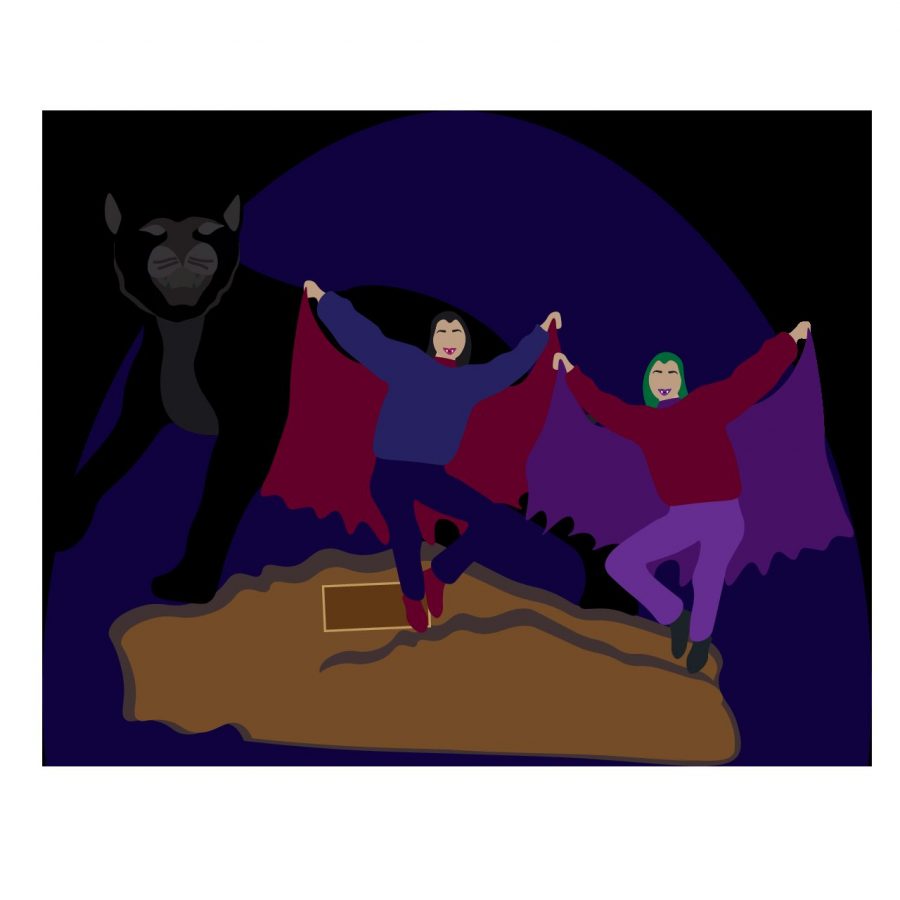 Sebastian Dewitt, acting club president of Marquette After Dusk and junior theatre technology major, has been with the group for almost four semesters.

“What makes it so special to me is that I see this group as a chance to take a break from work and studies to take on a whole other persona of my choice,” Dewitt said. “I have met a lot of wonderful people and made amazing friends in this LARP group who I value deeply. All of us see this as a chance to let our imaginations grow and to play them out in whatever scenarios are available to us that evening.”

Sessions begin around 6 p.m. every Friday throughout three classrooms of McClintock. Vampiric characters meet up in a safe space known as ‘Elysium’ where the prince resides as well as where all the news of the night is posted. Characters choose to investigate one of the locations posted on the news ballad to progress the plot of the story.

“Say someone was murdered ritualistically in a park on the other side of town or an ancient relic was stolen in a museum in the downtown area. Our characters choose either individually or in teams and we go to one of the other classrooms to act out the scene,” Dewitt said. “How a scene turns out is dependent on how you yourself want to act out the character or whatever special abilities you can use in that scene from whatever race of vampire you choose.”

The group plays off the roleplaying guidebook ‘Vampire: The Masquerade’ where players get the rundown of the history, lore and different factions of the vampire races that a player can choose from.

“For example, Malkaveans, are your common urban vampire, who has heightened sixth sense and can be seen communing with ghosts. Gengruls are woodland vampires more attuned with nature and can even control animals. Brujahs are more gangster-like and deal more in strength, speed, and cunning to get the job done. Toredeaus are the richer, sophisticated, and older group of vampires who enact most of the leadership roles. The Nosferatu are the same as Toredeaus but more deformed, ugly and older than history, therefore very powerful,” Dewitt said. “A new player can choose from these different races of vampires and much more not covered here, based on whatever best suits the player and the character they are creating.”

Every semester the scenarios for the stories and scenes are different. It could be a mysterious ancient cult threatening the vampire area or human hunters looking to exterminate the area.

“There’s a new story every semester for our characters to face and I’ll be honest, with every new scenario, even with my experience, I still feel like I’m learning something new about the world of darkness every Friday night,” Dewitt said.

The group plays for around four hours and then wraps up the evening by submitting their character sheets and going to the usual hangout spot at Vango’s for an evening snack. New arrivals are highly encouraged, though may have the spend the first night constructing the character they wish to play for the story.

“Once you familiarize yourself with your vampire character and their abilities, it all comes down to how you, the student, want to act out your original character and how they interact with other vampires,” Dewitt said.

Dewitt said that it has been tough trying to keep the group together with how small the group is. The majority of the storytellers and players are former NMU students. In total, the group has about seven to eight players.

“To put it frankly, we’re looking for more active students still studying on campus to notice us and take an interest to grow our ranks. Otherwise, as more of us graduate, there won’t be any more of us left to qualify for leadership roles and our group will die out,” Dewitt said. “I’m its acting club president for the time being and it falls on me alone to acquire keys for our spaces and to commence the evening, as well as to look after any money we have to use and make ourselves known. We sadly don’t have enough people to fill in other leadership roles, so for now, it falls on me to keep the group alive and going, recognized by the campus.”

Dewitt said that the hope is for more students to join so the group can do more stories and have more diverse characters to act out in their activities.

“We wish to make a space for students to take a break from school work so they can be someone else for a night,” Dewitt said. “Someone dark and mysterious in search of adventure and intrigue or whatever get the imagination active for one evening in a week.”

Those who are interested in joining Marquette After Dusk can contact Dewitt via email at [email protected], their Facebook group or the Hub. The group’s next meeting is Friday, Nov. 12.