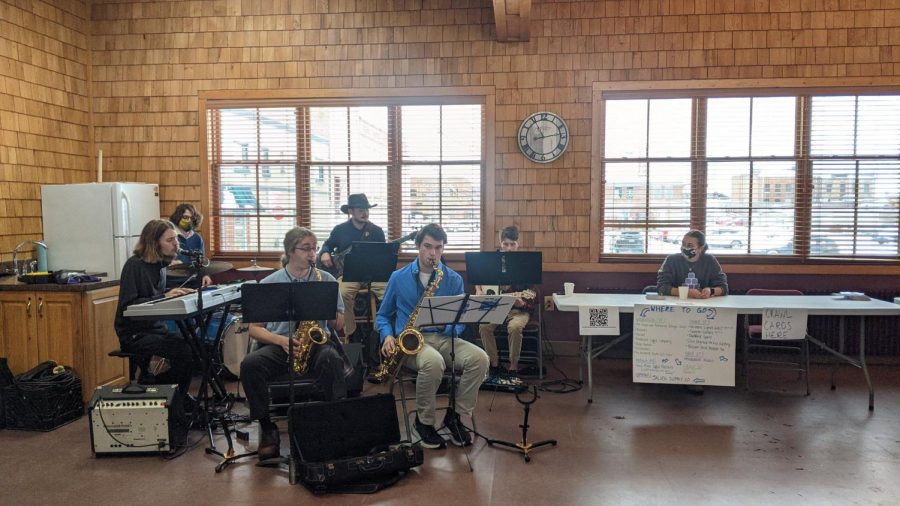 The Timekeepers, an NMU student jazz band, performs at the Small Business Sunday Crawl in the Marquette Commons. The event was organized by SLFP students as a part of their community service learning project.

Jazz music and sounds of laughter poured out the doors of the Marquette Commons on Sunday, Nov. 14 as people went inside to escape the icy winds with a cup of free hot chocolate and check out the Small Business Sunday Crawl.

The crawl was organized by students in the Student Leader Fellowship Program at NMU as a part of their service learning project for the community. They were tasked with identifying a problem within their community, creating a proposal to help with the issue and carrying out the project before the end of the semester.

“We chose to do small businesses, because COVID hit them really hard nationwide,” Maggie Lynch, second-year bio-chem major and SLFP member, said. “We were like, ‘how can we help Marquette get some traffic, get some new students who maybe didn’t have a chance last year during COVID more familiar with the area, familiar with local businesses.’”

The focus on small businesses for the project came after they looked at stats such as small business revenue in Michigan decreasing by 48% as of June 30, 2021, compared to January 2020.

To help increase local small business revenue, they decided to organize Small Business Sunday which would encourage students and community members to visit local shops along Washington and Third Street.

Their initial idea was to have small businesses set up a booth within a large gathering space and have patrons visit each table to find out more about each business.

“Originally supposed to be this big indoor event where businesses would come and table and have their products there,” Karine Pratt, third-year speech and hearing science major and SLFP member, said. “But I’m glad that we could cater it to where they didn’t have to leave their business because that would mean sacrificing people and they are already so short staffed right now.”

The event ended up being a crawl to many different partnering businesses, some of whom were offering discounts to patrons. Participating people first stopped at the Marquette Commons where they could pick up a cup of free hot chocolate, make some crafts and listen to “The Timekeepers”, an NMU student jazz band. They also received a bingo card and list of participating businesses to visit along their route.

Some of the participating businesses along the route were Revisions, Revival, Chickadees, Gathered Earth and Downwind Sports. Velodrome Coffee Co. also donated five gallons of coffee and five gallons of hot water to make hot chocolate for the event. Jalien Supply Co. was another business set up in the Marquette Commons selling their wares and talking to participants.

Overall, their event attracted around 50 people who visited and supported the small businesses around Marquette.

“I’m really proud of my class for how we overcame all these obstacles and I’m really happy for how we all worked together,” Pratt said. “It’s such a blessing and a great opportunity for one of our ideas to become this community thing.”