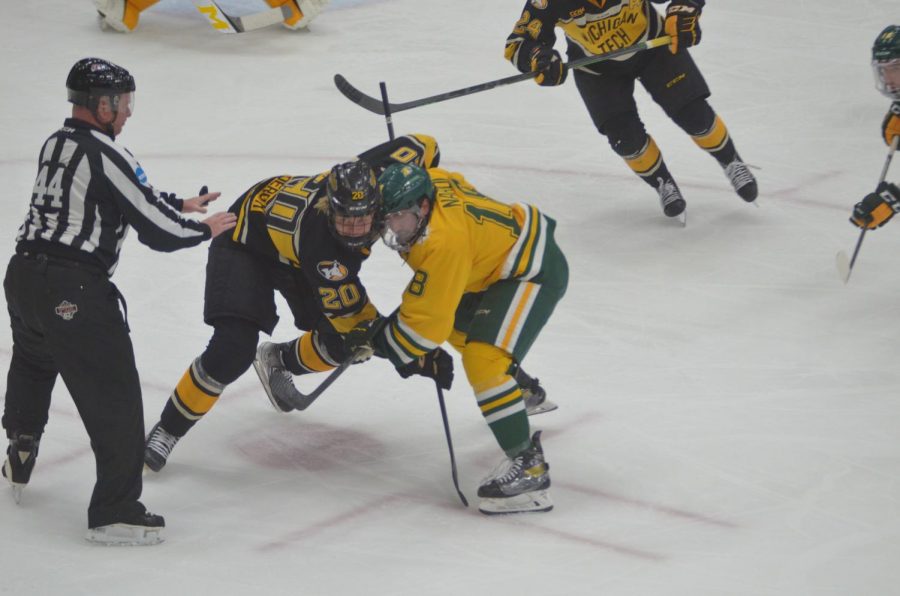 RIVALS GOING AT IT—NMU forward Joseph Nardi fights for the faceoff with Michigan Tech's Arvid Caderoth during Saturday night's game. The Wildcats lost 5-2, but earned the series split with a win on Friday. Travis Nelson/NW.

The Northern Michigan University hockey team looked to sweep arch-rival Michigan Tech for the first time since the 2018-19 season, but couldn’t do so in a 5-2 loss at the Berry Events Center on Saturday night.

NMU (5-6, 3-5 WCHA) picked up the win at the John Macinnes Student Ice Arena in Houghton in a 3-2 overtime win on Friday night with the game-winning goal from forward AJ Vanderbeck. However, on night two against the Huskies, the Wildcats had opportunities that slipped away. Even with that being said, NMU coach Grant Potulny felt progress was made defensively.

“We gave up 22 shots,” Potulny said. “We made major strides this weekend with our d-core and with the defensive side of the puck. I mean Hank Crone and AJ Vanderbeck have a 2-on-1 to make it 3-3 and if there’s anybody that you could choose, it’d probably be them. We had lots of looks, whether we shot into the chest or he made the save, I guess we’ll see on the video. But if that’s the way we’re going to defend, and we’ve talked a lot about that, if that’s how we’re going to defend through the rest of the year, I feel pretty good.”

Northern was shut out in a tightly-played first period, but Michigan Tech got a goal from forward Logan Pietila at the 11:38 mark in the first with assists from forward Justin Misiak and Brett Thorne.

The offense picked up for both teams in the second, and the Wildcats jumped out to a 2-1 lead. Forward Hampus Eriksson scored off of passes from forwards Andre Ghantous and Mikey Colella to tie the game at 6:37. Eriksson’s parents were in attendance for the first time in nearly three years to watch their son play.

“It was amazing, they haven’t watched me live in three years now because of COVID and stuff like that,” Eriksson said. “It feels good to have them here for sure.”

On the power play, Hank Crone gave the lead to the Wildcats with a goal off passes from defenseman Ben Newhouse and forward David Keefer at 10:41.

MTU had two power plays down the stretch in the second period and scored two goals within 55 seconds of each other. Forward Trenton Bliss tied the game up 2-2 at 14:09 with assists from forward Tommy Parrottino and defenseman Colin Swoyer. Bliss and Swoyer assisted forward Arvid Caderoth’s goal at 15:04 to make it 3-2.

The Wildcats had a few chances to tie it up in the third period, including Crone and Vanderbeck’s 2-on-1 that didn’t result in a shot as Potulny mentioned. Northern also had a power play, but it was killed off by the Huskies. Pietila appeared to end things with his second goal of the game off the assist from defenseman Michael Karow to extend Tech’s lead to 4-2 with 5:16 left. The ‘Cats went to the empty net in the final minutes, and Tech forward Brian Halonen scored with 2:04 left to slam the door shut.

The Wildcats’ two goals came from the top two lines, and Potulny said that he thinks that the team needs to find some depth scoring. On the other side, progress is being made defensively and the team is playing hard, according to Potulny.

NMU heads to Ferris State next weekend for a road conference series clash. Even with a loss on Saturday, there seems to be something to build off of.

“I think defensively, we were as good as ever,” NMU captain forward Joseph Nardi said. “I think it’s just taking the positives away and looking at the video, and working on some of the breakdowns and getting back to work on Monday.”