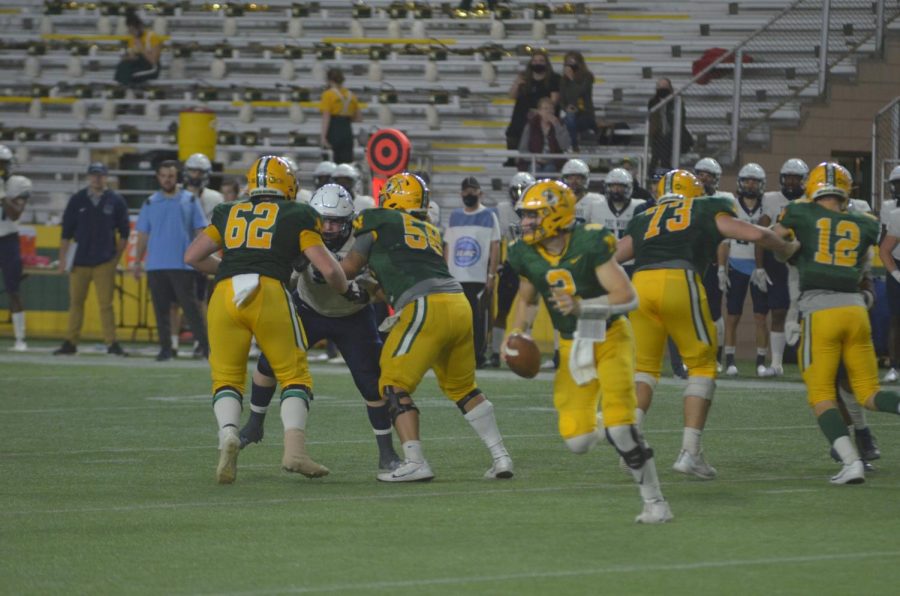 GOING OUT ON TOP—NMU quarterback Zach Keen rolls out of the pocket to make a throw during Saturday's win over Northwood. Despite being shorthanded and trailing early, the 'Cats closed the season out strong. Travis Nelson/NW.

The rollercoaster season for the Northern Michigan University football team came to an end on Saturday afternoon, as the Wildcats earned a 34-26 senior day victory over Northwood.

Things were never easy for NMU (4-7, 2-5 GLIAC), as the ‘Cats were left without multiple key starters due to COVID-19 that included quarterback Drake Davis and wide receiver Wyatt Davis. Northern also started the game trailing 14-0 to a struggling Northwood team (1-9, 0-7 GLIAC) that’s only victory of the year was against NMU back on Saturday, Sept. 25. Despite all of that, the Wildcats were able to end the season with a win for the first time since 2014.

“I couldn’t be happier, [I’m] proud of them, happy for them,” NMU coach Kyle Nystrom said. “I got to be honest with you, I’m shot, I’m rung out. Every win here is like right to the last nth every time, it just strings me. I’d like to have been cleaner there at the end, but we weren’t. And so you just got to appreciate the win, you just take the win whenever you can get it and I am. So we’ll be happy about it until we play again and use it as momentum.”

Reserve quarterback Zach Keen started his first career game, and finished 14-29 for 248 yards, two touchdowns and one interception. Keen was injured during last week’s loss to Saginaw Valley State, and Nystrom said he didn’t think that Keen was even going to play. Though the first quarter presented challenges in his first start, what you can’t question is the freshman’s toughness, the coach said.

“That’s his first rodeo, a lot of growing up to do,” Nystrom said. “But he got through it and won the game, he’s 1-0. Can’t take that away from him, I congratulate him on that. He’s gonna be a real good player here, he’s got a lot of tools.”

NMU got contributions from other players thrust into the spotlight, including tight end Charlie Gerhard who led the team in receiving with six catches for 119 yards and a touchdown. The running game also got going as running back DJ Stewart and wide receiver Tyquan Cox split the carries for the ‘Cats. Stewart had a game-high 142 yards rushing and a touchdown on 16 carries, with Cox handling 15 carries for 83 yards and a score. Northern had a season-high 449 yards on offense, and that couldn’t have been done with different players stepping up.

“I give all those guys that came in and did that job, that normally weren’t playing behind those guys, salutations,” Nystrom said. “They did great.”

Northwood jumped to a 14-0 lead with a seven-yard run from running back Brock Franklin and an 80-yard pass from quarterback Ty Cox to wide receiver Noah Koenigsknecht. The Timberwolves’ wideout led the game with seven catches for 169 yards and the score, and Cox had 212 passing yards on the day.

The ‘Cats responded with Keen’s first touchdown pass to Gerhard for eight yards with 14:50 left in the second quarter. NMU forced a Northwood punt and marched down the field on a 10-play touchdown drive capped off with a six-yard pass from Keen to wide receiver Yale Van Dyne to tie the game. Both teams added a field goal to tie the game once again at 17-17, but the Timberwolves nailed another one before the half ended to take a three-point advantage.

Both teams struggled on their first couple of drives to begin the second half, but a strong Northwood drive ended abruptly with a key fumble recovery by NMU linebacker Will Borchert. The Wildcats couldn’t capitalize off of the ensuing drive, but it prevented Northwood points. NMU took the lead with 13:34 left on a five-yard run by Stewart, making it 24-20. The Northern defense forced a punt, and the offense scored again with a four-yard Cox rush to extend the lead to double digits with 7:28 to go.

NMU kept Northwood out of the end-zone for the remainder of the game and held on for the 34-26 win.

The season proved to have its challenges with not only seven losses but losing three coaches during the midst of the year. Even with adversity at many turns, the team was able to close the 2021 campaign on the winning side of things.

“I love the win, I’m going to think about the season,” Nystrom said. “I need some time to figure out what we got to do and how we’re going to do it. I need to meet with the administration and find out what we want to do with our football program.”