Neuroscience Club hosts ‘A Day in The Life of a Neurosurgeon’ 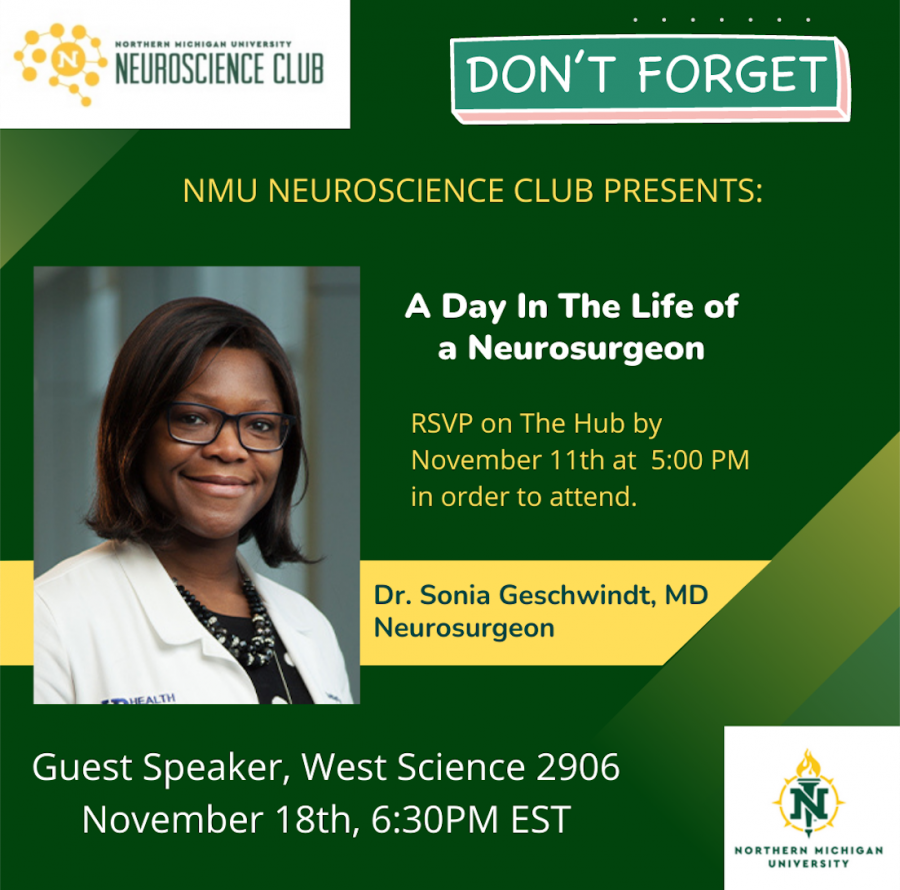 Northern Michigan University’s Neuroscience Club is hosting their first ‘A Day in the Life of a Neurosurgeon’ with U.P. Health System Marquette Dr. Sonia Geschwindt. The event will be hosted in West Science 2906 today, Nov. 18.

Geschwindt, as a local neurosurgeon, will be discussing her journey from being an undergraduate student to being in the operating room. In addition, she will also be discussing how this job has impacted her personal life.

Sydney Benson, junior and neuroscience major said, “I think it will definitely be more impactful on the students that attend because if we want to reach out again in the future or talk and ask some more questions, she is in the proximity of the school.”

After her presentation, there will be a Q&A for students and faculty which is what Anna Nagy, president of the Neuroscience Club, is most excited about.

“I think that bringing in people who aren’t necessarily in academia is very important to just any undergraduate student because you’re not going to be in academia forever,” said Nagy, “It’s nice to see people who are outside of that [academia] and how their day to day life looks.”

According to the Association of American Medical Colleges, the U.S. will face a severe shortage of physicians by 2034 within primary and specialty care. This issue was highlighted during the pandemic as it exposed many of the nation’s disparities in regard to healthcare.

“There are only three neurosurgeons in the U.P., so, we don’t have a whole lot of options up here,” Nagy said. “Bringing one of those three people in [for the event] is impactful.”

NMU is one of the few public universities in the country to offer a bachelor’s program in neuroscience. In addition, as a newer program, its club counterpart is the first of its kind on campus.

“Our club actually started during COVID. Doctor Geschwindt will be our first in-person speaker which is really exciting,” said Nagy, “This has been a new experience. Coordinating it was a bit of a challenge simply because I’ve never put on a live event before. Getting everybody together and making things happen has been such a cool experience.”

However, according to Nagy, despite the struggle to put the event on she looks forward to the turnout and has high hopes for future events put on by the club. Students that are still interested in attending the event may reach out to the club via their page instead of RSVPing on the Hub.

“Putting on events like this is so important because, in college, we are all just trying to figure out what is interesting enough to do for the rest of our life,” said Benson. “It can be hard to choose a career when you are so young and haven’t experienced different types of work in your life.”

As of right now, the club does not have funding through the university and will need to fundraise in order to host future events. To stay in touch with their future events and fundraising, access the Hub.