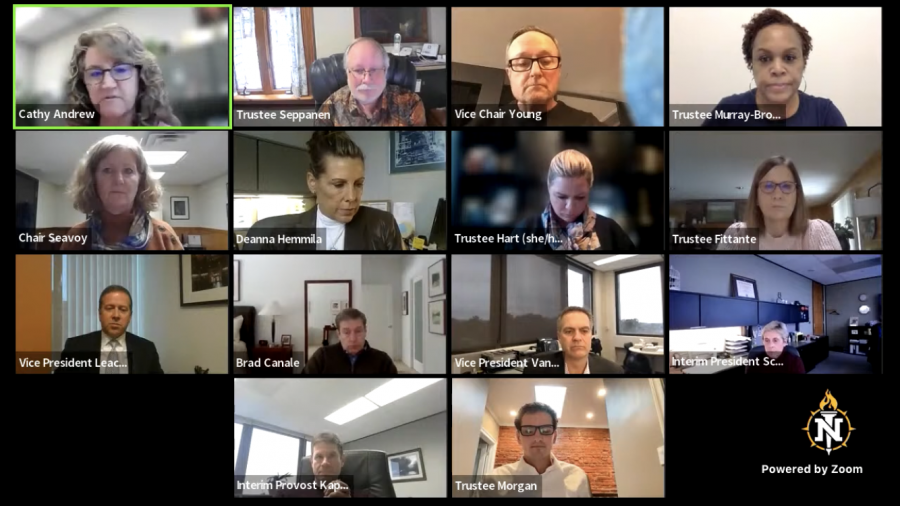 TAKING A VOTE—NMU's Board of Trustees met virtually on Wednesday, Dec. 1, for a special session to discuss the presidential search firm as well as interim president's, Kerri Schuiling, contract. The next scheduled board meeting will be on Thursday, Dec. 9, at 11:30 a.m. in the Northern Center.

Northern Michigan University’s Board of Trustees met on Wednesday, Dec. 1, over Zoom for a special session. The session covered the presidential search firm recommendation and the interim president’s contract.

The meeting was called to order at 3:30 p.m. and roll was called. Of the BOT members, Trustee Mahaney was absent due to a pre-existing conflict that was unable to be accommodated and rescheduled. In addition to the BOT members, interim president Kerri Schuiling, vice president Gavin Leach, interim provost Dale Kapla, CEO of the NMU Foundation, Brad Canale, vice president for extended learning and community engagement, Steve VandenAvond, secretary of the BOT, Cathy Andrew and executive director of the board and government relations, Deanna Hemmila.

On Oct. 1 the BOT met and authorized chair Tami Seavoy and vice-chair Stephen Young in requesting proposals for the presidential search firm and to come back with a recommendation. Young said that he would like to make the motion to hire Parker Executive Search in accordance with the proposal that they had submitted to the BOT.

The BOT sent out 19 requests for proposals to various search firms across the country and heard back from nine different firms. Of those initial nine, three were interviewed.

“I was impressed with all of the firms that we got proposals from. I think they brought many good and different points in their presentations for us to think about,” Young said. “However, I do believe Parker Executive Search gave the strongest presentation. It seemed best suited to the specific needs that we have at Northern at this particular time.”

Trustee Alexis Hart also spoke on the motion to hire PES in favor of the vote to hire.

“I absolutely agree that this would be the first choice of the options that we saw unanimously,” Hart said. “Diversity and inclusion is a topic that they had on [their proposal] which I think is also is extremely important to ensure that we are also focused on that leadership skill.”

The BOT moved to vote on the motion, resulting in a 7 for hiring PES and 0 against.

“With its proven track record in higher education, we are confident that Parker will offer highly qualified guidance as we launch the important search for Northern’s next president,” said Seavoy. “This is the first pivotal step in the process. A presidential search advisory committee composed of a diverse set of university stakeholders will be assembled in the near future. Related activities will accelerate early next semester in the hope of having a new president in place by July 1.”

Moving to the second topic of the meeting, interim president Schuiling’s contract was discussed.

“First off I wanna thank Dr. Schuiling for what I call stepping out and stepping in as our interim president,” Young said. “I think she’s done an outstanding job to date with this role in a difficult time and I wanna thank her for that effort and know that it is appreciated.”

Young said that the two goals of Schuiling’s contract in terms of compensation were to not be penalized for stepping into the role of interim president and the second goal was that dr would be compensated with benefits at the same level that the previous president did.

The BOT voted in favor of the contract with a 7 for and 0 against result.

According to Northern Today’s article, Schuiling’s annualized base salary as interim will be $402,518. When a permanent president takes office, her base salary and benefits will revert to the levels paid when she served as provost.

Schuiling will be available to consult with the new president through Dec. 31, 2022. She is scheduled to begin a one-year sabbatical on Jan. 1, 2023.