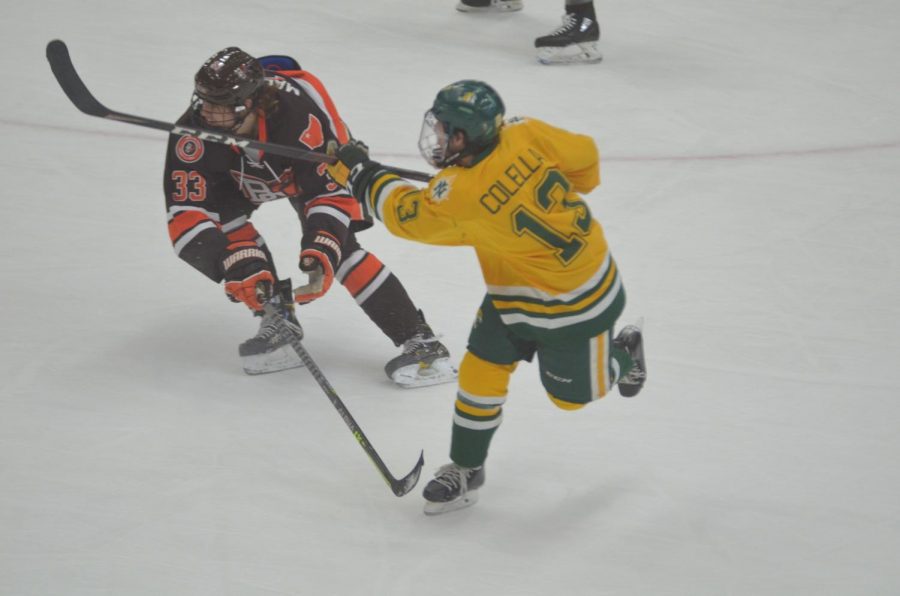 Coming off of a critical CCHA series, the Northern Michigan University hockey team has momentum heading into a showdown with top-ranked Minnesota Duluth.

NMU faced Bowling Green this past weekend and earned five of six points with a 6-3 win on Friday and a 3-3 tie on Saturday in a series that will be sure to mean something once the final standings are determined. The ‘Cats are rolling with wins in six of its past eight games, but none of those opponents have presented the challenges that the No. 1 Minnesota Duluth Bulldogs do.

Duluth took the top spot in the country this past week after NMU’s conference foe Minnesota State-Mankato dropped a game to Lake Superior State. UMD is 10-3-1 coming into this weekend’s series in Marquette, but all three losses have come to top seven teams in the nation (No. 3 Michigan, No. 6 Western Michigan, No. 7 North Dakota). The Bulldogs do a lot of things well to be No. 1 for a reason, and what they especially don’t do is beat themselves, NMU coach Grant Potulny said.

“They’re as well-coached as anybody in college hockey,” Potulny said. “They never beat themselves, they never beat themselves. I think that their forecheck and their neutral zone defense is so hard to come through with speed because in their 1-2-2 (defense) they have two layers. So those first set of forwards are above your highest guys and then they have another layer with their defenseman there.”

The Bulldogs have four players with double digit points so far this season, including forward Blake Biondi who has a team high six goals and is tied for a team high 11 points. Forward Noah Cates also has 11 points for UMD with flip flopped numbers of five goals and six assists compared to Biondi. Forwards Kobe Roth and Quinn Olson both have 10 points on the season, and Roth leads the Bulldogs with seven assists.

Northern has been one of the top prolific offenses in the country, and have six players that have double digit points. Forward Hank Crone is making his presence known in his debut season with the Wildcats, leading the team in points with 21 total on six goals and 15 assists. Crone’s mark of 21 points is also tied for seventh-most in the nation. Forwards AJ Vanderbeck and Mikey Colella have been battling all year to who is the ‘Cats leading goal scorer, and right now Vanderbeck has 12 and Colella has 11. Those three players along with forward Andre Ghantous are all in the top 30 in the country in points.

A key factor to watch heading into this series is that NMU has only been held below three goals in four of 15 games, and Duluth has only given up three or more goals in three of 13 games. The Wildcats’ offense is providing a punch every game thus far, and it’s important that the offense keeps trying to chip away against the Bulldogs’ stingy defense, Potulny said. The Bulldogs rank fifth in the nation in goals against.

“There’s a reason why they’re (fifth) in the country in goals against, they just don’t give you any chances,” Potulny said. “You have to earn everything you get from them. Then obviously they have really good players and all that too, but I think the biggest thing is just their attention to detail and their ability to make you come 200 feet and come through five players. If you can beat them, it’s because you’re mentally tough enough to play the game the right way. If you have any cheaters in the game, the good teams expose it every time.”

In the pairwise rankings that determine who makes the 16-team NCAA Tournament, NMU currently ranks 29th. With two games against Duluth upcoming who is almost certainly going to be one of the top teams all year long, there’s a big opportunity in front of the Wildcats.

“The opportunity is a great way to put it, you don’t get the chance to play teams like this every weekend,” Potulny said. “You have them at home, I think it’d be a really big feather in our cap going into the last weekend before break to come away with some wins. That has ramifications big time at the end of the year too because quality wins against teams that are high in the pairwise and are going to stay that high in the pairwise can really catapult you at the end of the year too.”

Both games will start at 6:37 p.m. on Friday and Saturday.