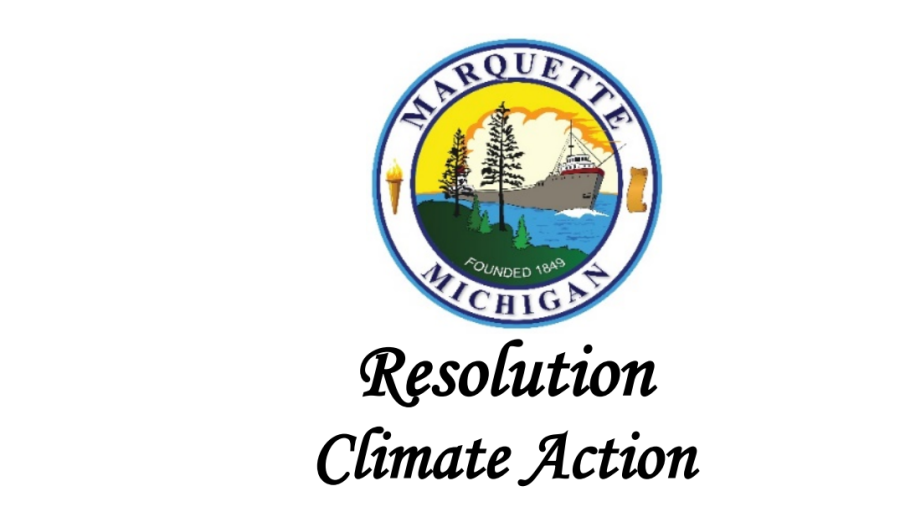 Courtesy of the city of Marquette

(CLIMATE) CHANGE - Marquette City Commission passed the Climate Action Resolution on Dec. 20, 2021 with a unanimous vote. The draft of the resolution was originally written by NMU faculty and students and contributing community members.

NMU students are paving the way for a sustainable, climate neutral future for Marquette.

In September 2021, assistant professor Ryan Stock gathered a group of environmentalists from on campus and in the community to draft a resolution declaring a climate emergency and directing the creation of a climate action plan for the city.

“I always tell my students to focus on the higher levers of change, because according to the Intergovernmental Panel on Climate Change, we only have until 2030 to significantly reduce greenhouse gasses by 45% lest we approach irreversible tipping points of ecological collapse and planetary breakdown,” said Stock. “That’s eight years to change everything.”

Marquette’s new Climate Action Resolution draws on climate change statistics from local, national and global levels, and it focuses on the most important points according to students and contributing writers Molly Miller, Maggie Bailey and Taylor Schmidt.

“It is actually very short and simple,” said Bailey, junior environmental science major. “We took from different reports and gathered a bunch of data talking about surface temperature of Lake Superior … and also how climate change impacts different groups of society.”

The document consists of seven statements incentivizing Marquette to become carbon neutral since “a transition to a clean energy economy, if not carefully planned, would have a disruptive impact on the livelihoods of many in our community while a well-planned transition may provide expanded job opportunities for local residents.”

Once the resolution was drafted, it was individually sent to each member of the City Commission. At the next City Commission meeting, NMU students, faculty and community members “flooded” the public comment section with short speeches urging commissioners to support the initiative.

At the end of one of the meetings, “every council member, and the mayor and the mayor pro tem all came out and said that they support this and they want to get it passed,” said Miller, junior social work major and environmental studies minor.

The City Commission took the next month and a half “to rework the text and make it their own and then passed it unanimously, seven out of seven, on Dec. 20,” said Stock. “They issued a resolution basically saying climate change is real and happening and it’s important that we confront the climate crisis as a city.”

Stock and his group were also working with the Planning Commission and got them to write a letter of support stating that they support the climate action resolution and will be willing to implement anything that comes out of it.

“I think [the resolution] is a really good leverage point to hold people accountable,” said Miller, “and also to remind people in power that this is an emergency and this is something people in Marquette really care about.”

Moving forward, the City Commission is coming up with a Climate Action Plan which will promote positive change on a higher level.

“We have to focus on systems and higher levers of power and think in terms of systemic change,” said Stock. “Focus on policies, focus on institutions, focus on structure.”

While buying local groceries, reducing water usage and riding a bike are all sustainable actions, they are not enough to encourage overall change to better the environment.

“I want everyone who cares about climate change … to shift their focus from individual action and move towards institutional change,” said Miller.

Miller is also a member of EcoReps and the Divestment Club on campus, where the main goal is to divest the university away from fossil fuels and to shift the focus from lifestyle sustainability to institutional change.

“It is great to think about personal sustainability, and I think that is still important,” said Miller. “But the difference between us coming together and making major changes in our community that will hopefully start a landslide effect so that other communities … will also make those changes is what is really important.”

Having passed the climate action resolution, Marquette is held accountable to include it in the city master plan and to begin making institutional changes.

“I want a future where I can do the things that I want to do, and I do not want to constantly be fighting something else that could with proper implementation help,” said Bailey. “We have the ability if we take action now to start making those changes, and hopefully have a better future for ourselves as well as the people around us.”