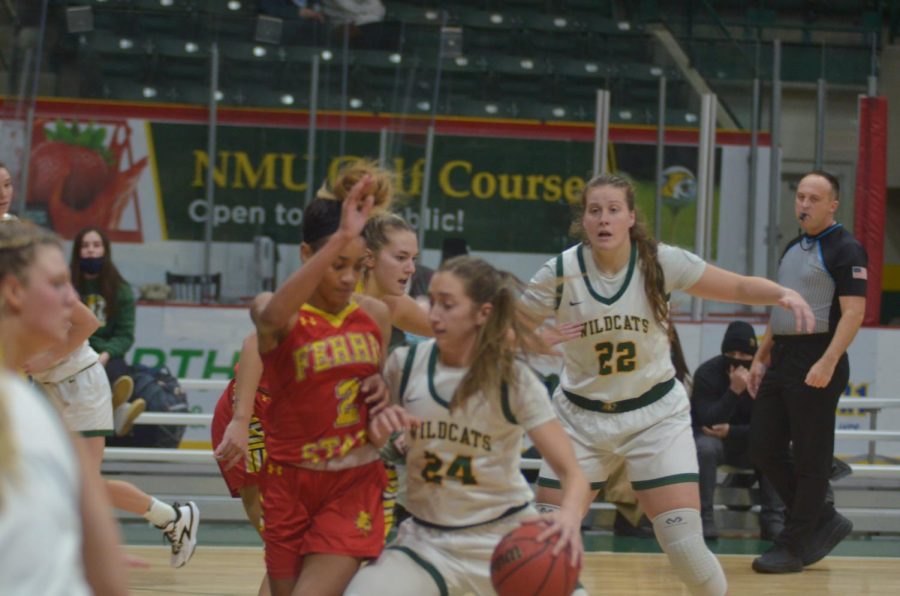 BRING ON THE TIMBERWOLVES—NMU guard Makaylee Kuhn drives to the rim during the womens' tight home loss to Ferris State on Thursday, Dec. 8. Both Wildcat squads look to get back on track in GLIAC play against Northwood on Saturday. Travis Nelson/NW

Both of the NMU men’s and women’s basketball teams are looking to back on the winning side of things this weekend with a conference match-up against Northwood on Saturday.

Facing Grand Valley State is always a challenge, and it was no different on Saturday when the Lakers came into the Berry Events Center and swept the Wildcats. Makaylee Kuhn gave it her all to try and boost her team up against GVSU with 23 points, but the ‘Cats came up short 61-48. On the men’s side, Grand Valley jumped out to a 14-0 lead to start the game, and NMU’s comeback bid was too little, too late in a 79-67 defeat.

With wins over Davenport last Thursday, the weekend wasn’t all lost for the Northern squads. Now with a chance to garner home wins over Northwood before welcoming rival Michigan Tech to town on Monday, it’s an important game.

“Massive, we started 0-4 in the league, so now through the first half, we’re 4-6,” men’s coach Matt Majkrzak said. “We’re actually only two games out of a home playoff game, and we’re also only three games ahead of not making the playoffs entirely. This is absolutely the main chunk of our season, 10 games to go, four of them at home, two of which are this weekend. (This) seems like that desperation of if you can’t get it done at home, you’re going to put yourself in a pretty big hole trying to get it done on the road.”

In the December 2 match-up at the Northwood, the men lost 81-72 in the first conference game of the season. NMU has changed the rotation a lot since then, and different players have stepped up in the past two months. Guard Justin Brookens was just getting back from injury and played eight minutes, while now starters guard Carson Smith and forward Sam Schultz only combined for 19 minutes of action.

It’s safe to say that the ‘Cats have improved since that early season game in Midland, but for their opponent, not so much. The Timberwolves haven’t won a game since the nine-point victory in December, but it’s too big of a game for the Wildcats to overlook them.

“We’re definitely a better team than we were when we played those guys, but they’re both improved too,” Majkrzak said. “But yeah, they’re massive games.”

The women on the other hand, were able to walk out of their Northwood game with a 77-69 victory. However, the ‘Cats have been up and down since with some tough losses and a bout with COVID-19. The Timberwolves started the conference season with a 1-5 record, but have now won six straight games and are the hottest team in the GLIAC.

Prior to the first game against NU, Wildcat women’s coach Troy Mattson expected Northwood to be a problem this season with how many returners they brought back from last year’s tournament team. With the winning streak, it appears they’re beginning to round into form.

“Northwood’s playing really well, they lost a lot of close games, I think they were 0-5 or 0-6 in the league to start,” Mattson said. “They’re not that kind of team, they returned everybody from last year from a team that made the national tournament. Hopefully for us, it’s a good match-up game and we’re going to need to play our best for the whole weekend.”