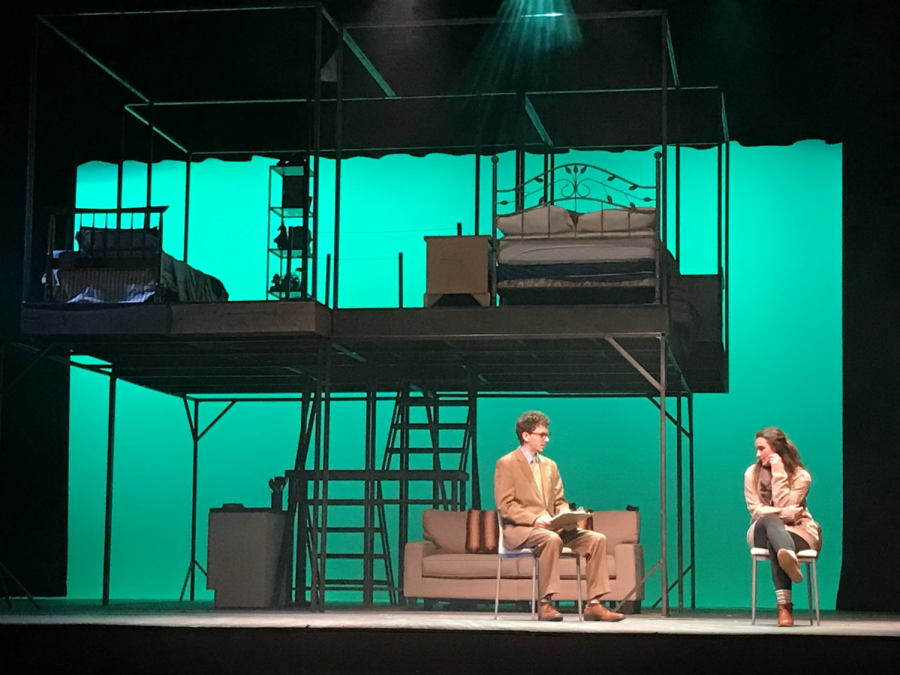 The NMU Theatre and Dance Department held showings of its latest production, the rock musical Next To Normal, from Wednesday to Saturday night with guests from Great Lakes Recovery joining for an after show discussion on Thursday.

The play is about a family’s struggle with mental illness, both directly and indirectly as the character Diana Goodman battles bipolar disorder. The play has a small cast of six, ensuring greater time spent on each character and their feelings and experiences. Despite handling serious subject matter, the play has a full range of emotion, featuring a romantic subplot and even the occasional levity brought by humor.

Rehearsals for the show began early October in the Black Box Theater and picked back up at the beginning of the winter semester in the Forest Roberts Theater. Production stage manager Sylvia Bednarczyk said working in the Black Box Theater had its own difficulties, as the play features a two story set rested on a rotating turntable about 36 feet in diameter, which the tiny theater didn’t have space for. To make up for this, the floor was divided by tape to identify the different rooms and levels, which gave the actors a better sense of setting.

Bednarczyk said this difference in set made directional cues, such as blocking, difficult. The move to the larger theater had its own challenges as well. She mentioned that the two floors were built separately, so the motion of the actors had to change yet again as the set came to completion.

However, this challenge was not without positives. Student director Sophie Sam said the Black Box was a much more intimate space to rehearse, allowing for more in-depth performances to be achieved. Actors John Fatla and Katherine Marsh called the early rehearsals in the Black Box a good place to begin the process, and Marsh noted how it brought a greater level of intimacy to the larger theater.

Fatla said he would usually be at the theater by 6:00 p.m. to warm up, and begin practicing six to seven songs around 6:30 p.m. According to Sam, these rehearsals could last anywhere from four to six hours a night.

As a director, Sam was always on call to work to solve any problems that may arise, as well as dedicating time to research for the play. Bednarczyk similarly checked to make sure everything was running smoothly, as well as filling out pre-production paperwork and blocking notes. Bednarczyk said the cast started to feel like a small community by the end of rehearsals.

All this work was built up to what Marsh described as a cathartic experience on the stage for an actor. She said it was a bit of nerves as well as excitement, but ultimately enjoyable.

“All that buildup happens but once you walk on that stage and those stage lights are on, your mind is totally clear,” Fatla said. “You know exactly what you need to do, you know exactly how you need to do it. You might do something a little different one night and see how it goes, but at the end of the day, it’s an amazing experience.”

Much care was taken to putting the show together, but just as important was dealing with the heavy topic of mental illness in the play.

On Thursday, Feb. 3, the NMU Theatre Department welcomed professionals from Great Lakes Recovery to discuss mental health and entertainment, how it relates to the play and resources for audience members.

When working with the actors themselves, Sam said that she was careful as director to not step into any real world trauma and to give actors proper space when needed. Bednarczyk said it was common to give a “COVID-friendly hug” and to occasionally use humor to lighten the mood with such a deep topic of performance.

Performances will continue until Feb. 5 and tickets for the show can still be purchased at NMU ticketing.