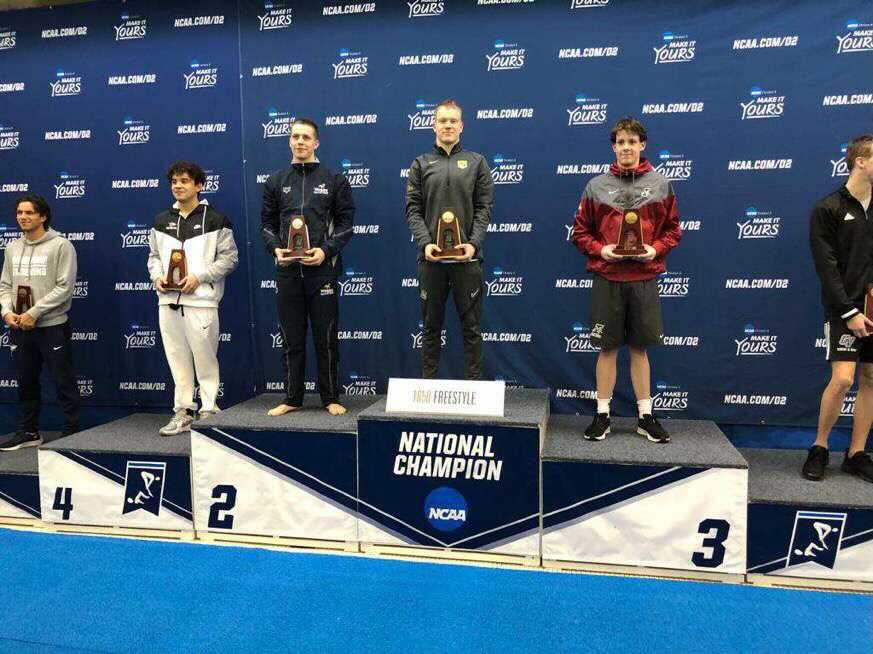 CHAMPION 'CATS—Ondrej Zach poses after winning the National Championship in the 1650-yard freestyle. The Wildcats had a solid go at it at Nationals with 13 All-American recipients. Photo courtesy of Ondrej Zach.

Senior Ondrej Zach took first place in the men’s 1650-yard freestyle, the longest race at the competition, coming in four seconds ahead of the second-place swimmer. Zach completed a time of 15:09.55, and broke the previous NMU record, which he set at last year’s Nationals.

“When standing behind the block, everyone has an equal chance to win the title,” Zach said. “I wanted it more and worked much harder than the others to win.”

Of the 38 swimmers and divers, 16 members of the team qualified at the GLIAC Championship for Nationals. The women’s team took first in the GLIACs, securing a team for the all available women’s relay.

Unlike the 2020-2021 DII Nationals, relay swimmers were allowed to race due to the pandemic. This time not only were the relays back but so was the spectators in the stands that provided a lot of energy for the team, NMU coach Heidi Voigt said.

“It was inspirational to them, they knew that this is where they wanted to be,” Voigt said. “We have a young group too, they all could be back next year.”

Qualifying for the NCAA Championships is an achievement in itself, junior Erikus Kapocius placed fifth in the men’s 400-yard individual medley with a time of 3:50.48, earning his first spot as an All-American and making his personal best time.

Kapocius received a second All-American award later in the week for placing 12th in the men’s 200-yard backstroke with a time of 1:45.97.

Living up to the title GLIAC’s Women’s Freshman of the Year,  Heidi Billings took 13th in the women’s 400-yard individual medley with a time of 4:21.92. Billings earned an honorary All-American title and broke the previous school record by two seconds, which she also held.

The team is always cheering on the sideline and is prideful of their spirit and supportiveness. Not only does the team try their best to win and work the hardest in the pool but also tries to encourage and hype up the team in any way possible, Zach said.

“It’s awesome to hear everyone cheer,” Zach said. “We are by far the loudest team at the pool during competitions.”

With Nationals coming to a conclusion, the qualifiers return to their offseason with the rest of the team. Practice starts again as the team prepares to move on into the next season in the fall.

“When it comes to the NCAA, it’s a really good feeling to be qualified as the number one, I won’t just take the achievement, I take this as another experience to improve for the future,” Zach said. “I want to sit down and see where I can improve.”

The team also gained 21 new faces with the incoming freshmen class. With notable improvements both in the regular season and the postseason, the team is looking to have another strong roster next season.

“We have a lot of great athletes coming in with our freshmen class, it only makes our team deeper,” Voigt said. “I am looking forward to being able to defend our GLIAC title.”