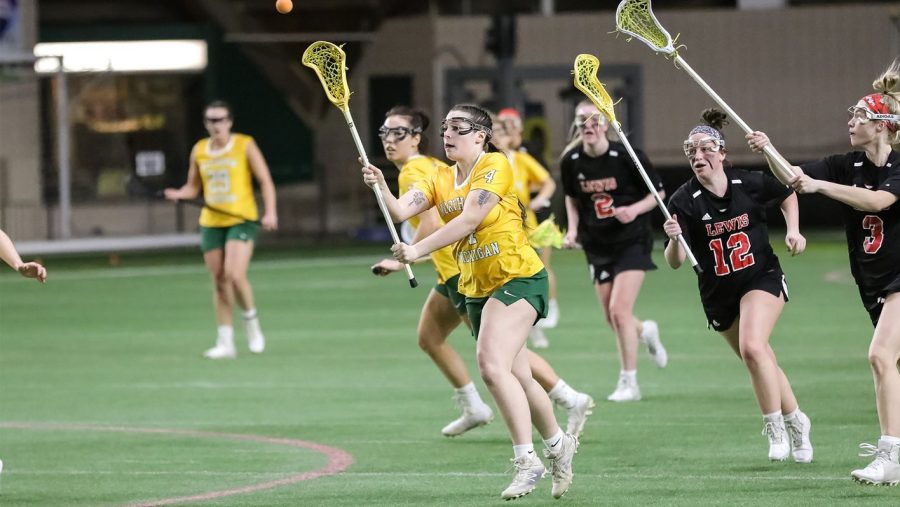 To say that the Northern Michigan University women’s lacrosse team is off to a historic start would be an understatement. Only 10 games into the season, the Wildcats have already won the most games in a single season with eight, and are currently on the program’s longest winning streak of six games.

The team is rolling right now with a record of 8-2, and come off a pair of road conference wins two weekends ago. Northern picked off Concordia-St. Paul in a 16-11 battle, and romped past the Peacocks of Upper Iowa in a 24-3 thrashing. This start to the season is one that third year coach Lindsey LeMay was hopeful of, but eight wins isn’t the bar for the program.

“I think it fits really well into the goals that we had this year, especially with our returning class, just what we talked about at the end of the year,” LeMay said. “We talked about wanting to be good when we’d already had such a record breaking season last year, but we still had never had a .500 season, so our standard for good needed to be higher.”

Despite the impressive start from the ‘Cats, the schedule presents two roadblocks this upcoming weekend inside of the Superior Dome. NMU welcomes No. 9 Grand Valley State at 5 p.m. on Friday, and No. 18 Davenport at noon on Sunday. The Wildcats went 0-5 last year against the two Grand Rapids-area schools, and lost all five games by double digits. There is optimism that this year’s match-ups will be more manageable with the recent success from the Wildcats, but this is no doubt a crucial stretch of the season.

“We are entering the hardest part of our season, and it’s annoying when it’s your conference that are the best opponents that you’re going to play,” LeMay said. “I think it’ll be a good test for us to play two nationally top ranked teams two times, so we’ll see.”

The Wildcats’ lacrosse program is still fairly new in its sixth season. The Lakers’ program has been around since LeMay has been in middle school, and the Wildcats as a fresh program are trying to make some noise in the GLIAC. Facing these two ranked teams is going to be a challenge, but Northern’s hot start shows that they’re looking for more.

“What’s hard about lacrosse is those nationally ranked teams,” LeMay said. “I do think we’re going to be in a better place to be more competitive than we have been in the past just because we’re on this roll, we’re playing well. Grand Valley’s the No. 11 team in the country, so it’s a high par. We have to play differently than we have been to be able to match up with them. It’s going to need to be an exceptional game for a couple of players for us to be in the running in the game.”