Football gears up for 2022 season with spring game 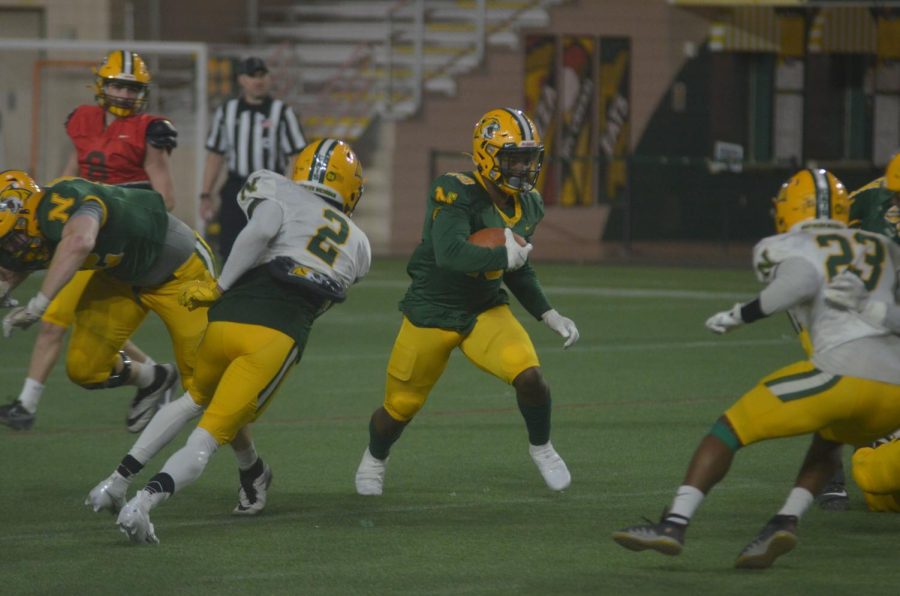 SPRING CLEANING—Running back Tyshon King carries the ball against the Wildcats' defense in white during the spring game on Saturday. The offense and King had a productive day. Travis Nelson/NW

The Northern Michigan University football team divided in half on Saturday afternoon in front of a crowd to scrimmage in their spring game to cap off spring practice.

The offense wore green, while the defense wore white, and even though it’s April, football was in the air inside the confines of the Superior Dome. The team did some special teams and individual work before heading into battle against each other. Despite a couple bumps and bruises, it was a successful day and spring for Kyle Nystrom’s squad. Leaving no doubt, it was the offense that won the day.

“The offense had a great day today, it was probably our best day of the spring, so I was happy to see that,” Nystrom said. “You only get so much from a scrimmage, but it’s even worse if we’re just doing drills. We got through the spring relatively clean, which is always priority one, and still get the things accomplished that you need to get accomplished. (We) solidified the offense schematically, and we’ve done that. It was the first time that the players didn’t have to learn a new system, so they’re more comfortable with that.”

The goal was to run about 60-70 plays, and the offense scored five touchdowns. On the first drive, the offense marched down the field and quarterback Drake Davis found fullback Kyle Sahr out of the backfield for the first touchdown of the afternoon. The two freshman quarterbacks- Dylan Davidson and Jake Blitz- made some big-time throws for touchdown passes. Davidson threw a strike in the back corner of the end-zone for a touchdown to freshman wide receiver Cohen Waters, and Blitz rolled out to his left and threw across his body to a wide open receiver for another score.

Backup quarterback Zach Keen also got in on the action, and threw a beauty in the same back corner that Waters caught his pass, to Marquette native Kam Karp. Running back Tyshon King had an impressive day in the running game, and smashed his way into the end-zone for the final touchdown of the scrimmage.

“You watched Tyshon today, he’s a difference maker,” Nystrom said. “He’s hard to get on the ground, and that’s not just against us, he does that to everybody. The obstacle for him is keeping him healthy, because we’ve lost him for two years within the first four games.”

The direction of the program seems to be heading in the right direction, especially after showing something last season despite a 4-7 record. Nystrom likes the running back and quarterback rooms led by King and Davis, and the experience inside on the offensive line. A position mentioned that needs work is the wide receiver group, but they do have two quality returners to rely on in Wyatt Davis and Isaiah Popp.

The defensive line needs to make some strides, and the linebacker room could see some switches, Nystrom said. However, Will Borchert returned for his sophomore season after a great freshman campaign. The secondary is the best since Nystrom has been here, he said.

“I like where we’re going, I’d like to get a few more pieces, and we’ll do that this spring,” Nystrom said. “I’m glad we got through it as healthy as we did. I would like to have seen the younger players make some bigger steps, but that’s always the way it is. But I know where our deficiencies are and I know where we need to try and catch up, and I know where we have to try and recruit people in the spring, that’s the biggest thing that I take away.”

The Wildcats will next take the field for preseason camp in August, and the 2022 season kicks off on Thursday, Sept. 1 at home against McKendree.