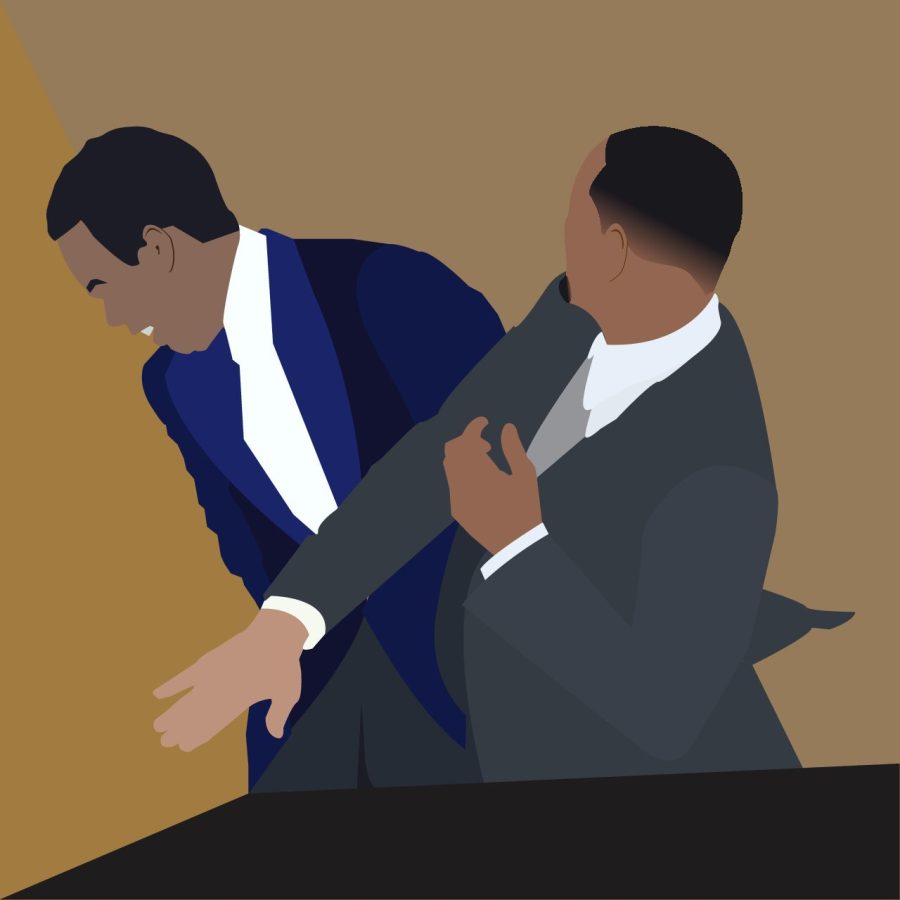 It’s been a little over two weeks since the 94th Academy Awards. Following March 27, the internet went crazy for the ‘slap heard around the world.’ We are, of course, talking about the meme-worthy performance that was Will Smith smacking Chris Rock across the face after Rock told an ill-received joke about Smith’s wife, Jada Pinkett-Smith, who has the autoimmune disease alopecia.

After stewing on this story for a bit, we started to connect the dots between the slap and a play that we both read in FR 363, French Literature Since 1900. That play is “Les Mouches,” or “The Flies” by Jean-Paul Sartre.

How, you might ask, does 20th Century French literature relate to the Will Smith smackdown? Well, the answer lies in Existentialism—specifically, Sartrean Existentialism.

Sartre was a French philosopher and author known for his role in the development of Existentialism. According to Sartre’s view of existentialism, man is composed of his actions, and nothing more. In Sartre’s opinion, to act is to exist. Sartrean Existentialism rests upon the fundamental postulate that there are no moral consequences to man’s actions, as God does not exist. As human beings, our freedom exists solely when it is manifested in action. Our consciousness is not only defined by a freedom of intention but precisely by freedom of action.

In this view, there is no right or wrong, no “moral compass” guiding us toward an outcome judged good or bad by society. However, society does prescribe consequences in form of laws and punishment for transgression thereof. Therefore, one acts as he or she considers right, and accepts the consequences.

This idea is illustrated in Smith’s recent actions.

Smith did not ask himself if it was right or wrong to slap Chris Rock. He heard a joke about his wife, which he felt was in bad taste and dishonored his family, and so he took the action that was right for him in that situation.

And while Smith’s slap yielded unwanted consequences in the form of internet hate across social media platforms and his recent resignation from the Academy of Motion Picture Arts and Sciences, what ultimately defines Smith by Sartrean existentialism is his personal act.

In Sartre’s “Les Mouches,” Orestes is defined by his act to restore honor to his family, by avenging the murder of his father, Agamemnon. Clytemnestra and her lover, Aegisthus, murder Agamemnon so that Aegisthus can become king. Orestes, spurred on by the rage of his sister, Electra, kills Clytemnestra and Aegisthus without thought of moral consequence. He believes that killing his mother and her lover is a necessary action if he is to avenge his father’s death.

At the end of “Les Mouches,” Orestes is king, having killed Aegisthus. Orestes then resigns his position of power and takes the weight of his people’s crimes and wrongdoings upon himself. He walks out of the kingdom to live alone, the Furies chasing after him, and the haunting flies that have tortured his murdered father’s kingdom, now coming to swarm around him for eternity. He accepts his consequences having completed the act that was his.

Meanwhile, we have Smith’s ongoing drama. A member of Hollywood royalty, Smith recently resigned from the Academy, and no longer has access to membership privileges. The Academy is set to begin an investigation, the consequences of which will likely haunt Smith for months (and possibly years) to come.