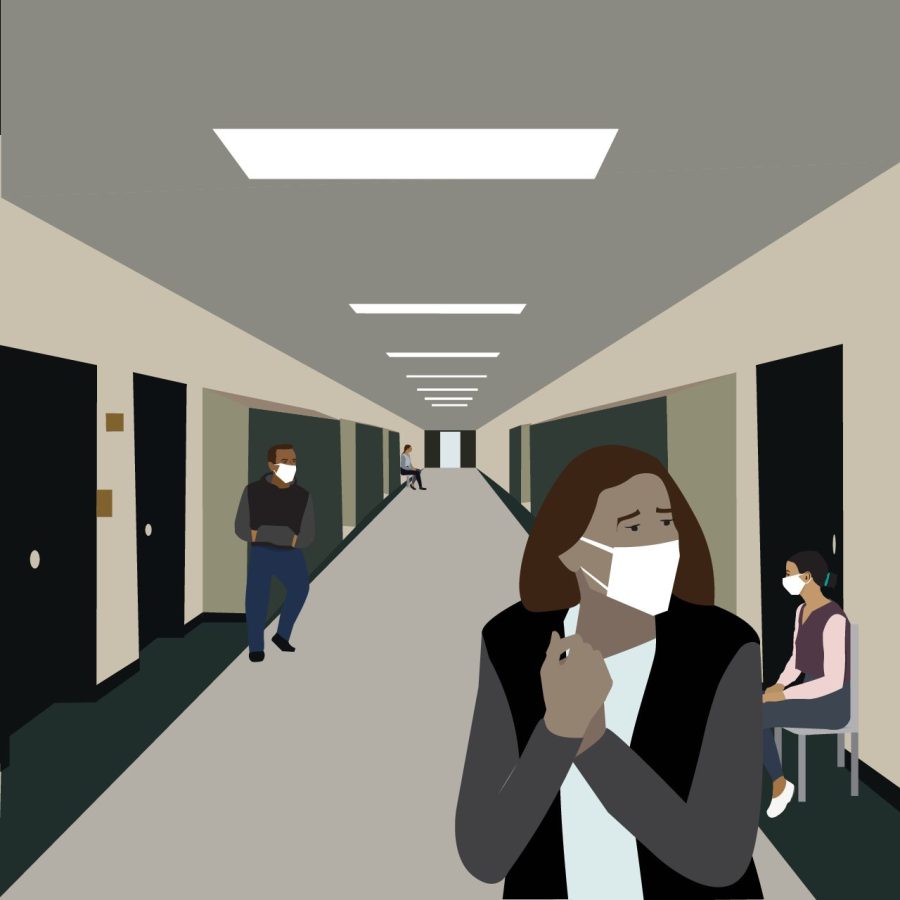 In a 2010 interview, late musician Meat Loaf discussed his lifelong struggles with social anxiety. He recalled panicking at the thought of going to large social events or working with other musicians and admitting that he had “no idea what to do” in social situations.

Most people struggle with some form of social anxiety at some point in their lives and acknowledging that it’s normal to not look great all the time is a good first step towards getting past it. Speaking from my own experience, I’m pretty relaxed when with friends, but in groups, I can feel my personality dry up.

Anyway, I lost my train of thought. Where was I? NMU student and cinema and media studies major David Olsen, felt uncomfortable Thursday walking past a group of students in Jamrich.

“God, that was so horrible,” Olsen said, “I mean, it’s like, do I look at my phone? Do I stare straight ahead? I just feel out of place no matter what I do.”

He eventually decided on holding his bag with one hand and letting the other one hang by his side, a decision he said he still regrets to this day.

Olsen added that he and the group were the only people in the hall, which, according to him, is somehow different than when the hall is packed with people coming out of class. Olsen said the main difference from the latter was “the comfortable feeling of slipping away and being another faceless person in the crowd.” He added that he feels similar when having to reply to messages on Snapchat or talk in class.

Olsen said he rushed back home afterward to lose himself in studying and to crack open a beer. This was 10:00 a.m.

However, after an exclusive interview with Lauren Goldberg, a member of the group walking past, and a fellow CAMS major, it appears that the feeling was mutual.

“Yeah, that was really awkward,” Goldberg said, “I’m walking in a group and then there’s someone who looks like they’re leaving a meeting or something. I can’t help but think, ‘am I being loud? Do I look like a scene from Heathers?’ I mean, can anyone comfortably walk in a group without feeling ridiculous? I just didn’t know what to do.”

Goldberg said she feels the same way when going to the dining hall with friends or, mother of Christ, having to talk in class.

After further investigation, it appears this story has yet another central layer to it. Similar to a Tootsie Pop, once you get to the middle, it’s weird and makes everything that came before it looks bad. Another member of the group, Adam “Cheeto” Ashton, surprisingly shared none of the feelings of anxiety from walking with a few friends in a mostly empty hallway.

“Oh, I’m totally fine. Why would I get stressed out from walking? Who do you think I am, Jeb Bush?” Ashton said.

“You felt completely confident?” I asked.

“Uh, yeah? ‘Completely confident’ might be a little much, but I felt fine. Normal, I guess. That’s a better word,” Ashton said.