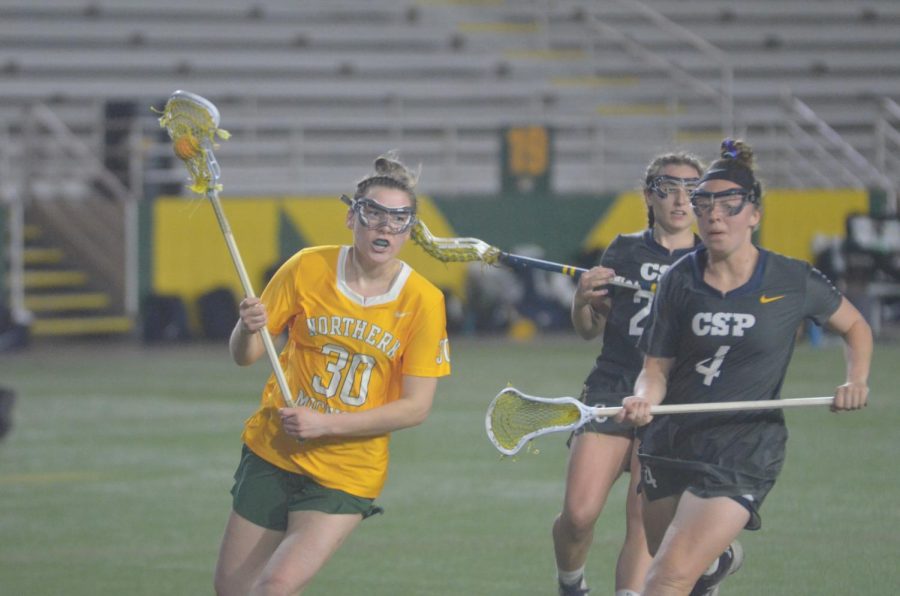 FF—NMU midfielder #30 Maddi Bast runs with the ball while being heavily pursued by Concordia St. Paul #4 midfielder Katie Moynihan. The Wildcats have dropped their third straight game, all at home. Travis Nelson/NW

The Northern Michigan University women’s lacrosse team (8-5, 2-3 GLIAC) tried to earn the season sweep of the Concordia University, St. Paul Golden Bears, and despite six goals from midfielder Madeline Bittell, came up short 13-10 in a close match-up on Wednesday evening.

NMU coach Lindsey LeMay considers Concordia St. Paul to be the Wildcats’ main rival. Nearly half of the Wildcats’ roster hails from Minnesota, and Northern had a strong nucleus of fans for the team’s 16-11 road win there back on Friday, March 18. LeMay thinks that the rematch came down to her team not having as much energy as their opponents. With only three games left in the regular season, there’s some work to do, she said.

“I think that we lacked the energy that we needed to be able to come out on top of that team,” LeMay said. “I think we underestimated a team with a small roster, and we should’ve anticipated that they are very good lacrosse players, and they don’t need that many people to be excellent. We needed to bring significant energy from the start, and we didn’t have it today. There was no momentum, and when we had a two-goal hole, we just didn’t have enough to dig out of it, which is very frustrating.”

Northern seemed to have some life in the first quarter, taking an early 4-2 lead. Attacker Taylor Priestley scored her two goals for the game in the opening frame, and midfielders Bittell and Aleya Speas each added a goal.

The script flipped in the second quarter, with the Golden Bears outscoring NMU 5-1, and taking a 7-5 halftime lead. Concordia opened the second by scoring three straight goals to take a 5-4 lead, and all three were scored by the Moynihan sisters, midfielder Katie and attacker Molly. Leading 6-5, CSP’s leading goal scorer attacker Delaney Davidson scored her 42nd goal of the season with 1:03 remaining in the first half to give the Golden Bears the momentum heading into the locker room. Bittell scored NMU’s only goal in the second quarter on a free-position shot.

The third quarter was quiet, with the Wildcats outscoring Concordia 2-1. By this point, Bittell had taken the game over, and she scored both of Northern’s goals in the quarter. Her second one cut the deficit to 8-7 at the quarter’s end.

The first five minutes of the fourth quarter were electric with six combined goals between both teams. Concordia attacker Maddy Seifert, their other dominant scorer, started getting involved and her second goal of the game put CSP up 9-7. Bittell had to work hard, but she was able to find the back of the net in consecutive trips down the field to tie the game. It didn’t feel like NMU had any business being in this game with the balanced attack from Concordia St. Paul, and a strong performance from goaltender Candace McDole. However, having a scorer like Bittell always can give a team a shot down the stretch.

“Maddy did a really, really good job, she takes this rivalry seriously and very personally because she’s from Minnetonka, Minnesota,” LeMay said. “She’s known all of these kids her whole life, and I’m so glad she showed up the way she did. I think they had scouted for the way that she takes the draw, which of course we anticipated, I just didn’t think we wouldn’t be able to handle it the way that we didn’t handle it. I’m proud of the performance that she had.”

All of a sudden when it looked like the Wildcats had a pep in their step, the Golden Bears roared back with three straight goals to gain a 12-9 lead. Davidson notched two of those goals for CSP, while attacker Erica Peterson drilled the other. NMU midfielder Maddi Bast was held in check for most of the game, but she had a huge goal to make it 12-10 with 6:55 remaining. The Wildcats had quality chances to come back and tie it up, but McDole made an impact all game in net with 14 saves. In the final minute with the result not in doubt, Katie Moynihan put it away with a free-position shot with 44 seconds left.

Bittell led all scorers with six goals on 11 shots on goal. Katie Moynihan, Davidson and Seifert all scored three goals to pace the Golden Bears, and Molly Moynihan chipped in with two. NMU had more shots on goal, but the loss came down to the draw circle with such a close margin, LeMay said.

“They brought their energy to that draw circle, and they were able to get the ball from that initial 50/50 possession, and really that’s the difference in the game right there,” LeMay said. “If we win those draw controls, that’s a closer game. Yeah we had a hard time running an offense and scoring today, but we can win the draw, you can have a better shot at that game.”

The Wildcats have a quick turnaround to host Upper Iowa at 5 p.m. today for Senior Day. NMU dispatched the winless Peacocks 24-3 in their first match-up back on Sunday, March 20.