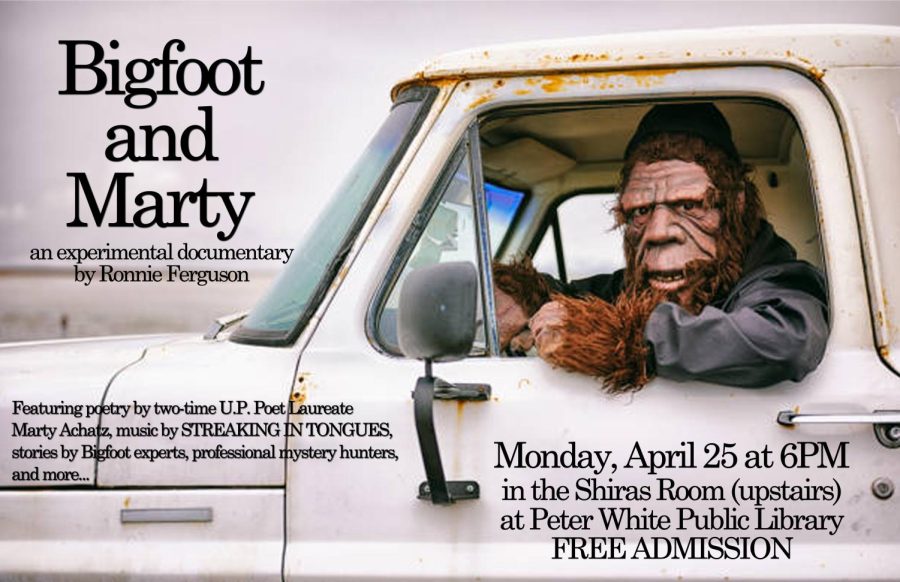 NMU’s MFA graduating student and English instructor, Ronnie Ferguson, will screen his new experimental documentary Bigfoot and Marty this month for the end of the Great Lakes Poetry Festival.

In-person screening will be held on Monday, April 25 in the Shiras Room at Peter White Public Library at 6 p.m. and virtually via Zoom on Friday, April 29 at noon.

Bigfoot and Marty is an experimental documentary that explores the poetry of two-time U.P. Poet Laureate and “Bigfoot Poet” Marty Achatz. The film features interviews and performances with Achatz, Bigfoot experts, professional mystery hunters and more.

Achatz, who plays a role in Ferguson’s documentary, is also co-planner, alongside Ferguson, in the Great Lakes Poetry Festival.

“As a two-time U. P. Poet Laureate, I am always looking for ways to promote poetry, especially to people who may not really like or understand it,” Achatz said. “When I meet someone who says that they don’t like poetry, my response is always the same: that’s because you haven’t encountered your poet yet, the one who speaks to you and your life.”

This year was the first time the festival was held. Achatz said that he and Ferguson were creating something that never existed before and that it gave them a chance to define what the festival is and will be for the future.

“When we eventually sit down to plan next year’s festival, I’m sure we will look at what we are doing this year and make changes and adjustments,” Achatz said. “However, right now, everything is exciting and new for everyone involved.”

Achatz said that the festival has something for everyone. Including Bigfoot and Marty, there are other screenings, readings, live music and poetry workshops that everyone is welcomed to and admission is free for all events.

While many of the events are in-person, the festival was planned with COVID at the forefront which built the ability to provide virtual formats.

“I hate using the word “pivot,” but, for all of the events and programs, we sort of built-in the ability to pivot to virtual formats if needed and doing things virtually allows Peter White Public Library and the festival to reach a much wider audience,” Achatz said. “So people from downstate, out-of-state, and out-of-country can tune in for live streams and Zoom workshops. That makes the entire festival so much more dynamic and flexible.”

While the Great Lakes Poetry Festival is coming to an end, those interested in still attending have until April 29 to experience some of the events held including Ferguson’s documentary.

“In many ways, Bigfoot and Marty is a meditation on mystery and obsession, as well as the role of faith in our lives,” Ferguson said.

During his time in the MFA program, Ferguson has created four feature-length films for his thesis which includes Bigfoot and Marty. Ferguson is the director, videographer and editor for the documentary. In addition to these roles, Ferguson’s band that he shares with his son, STREAKING IN TONGUES, composed the score for the film.

“Each film, I believe, will eventually find a unique audience,” Ferguson said. “I am taking the summer off from filmmaking, but I have a couple more full-length film projects in early stages of development.”

All filming for Bigfoot and Marty took place in the U.P. including the U.P. Bigfoot Conference in St. Ignace. Ferguson said that Marquette has a strong presence in the film.

“Bigfoot and Marty is for all ages,” Ferguson said. “It will especially appeal to adults who are interested in any one or a combination of the following: poetry, independent film, Bigfoot, the search for meaning, and the search for the unknown.”

The biggest challenge was filming outside on bitter winter days, Ferguson said. However, during the film, Ferguson learned a lot through the process and enjoyed getting to know Achatz and his own work, meet and learn from Bigfoot experts and professional mystery hunters and the U.P. in general.