Greer and Brundage must face questions 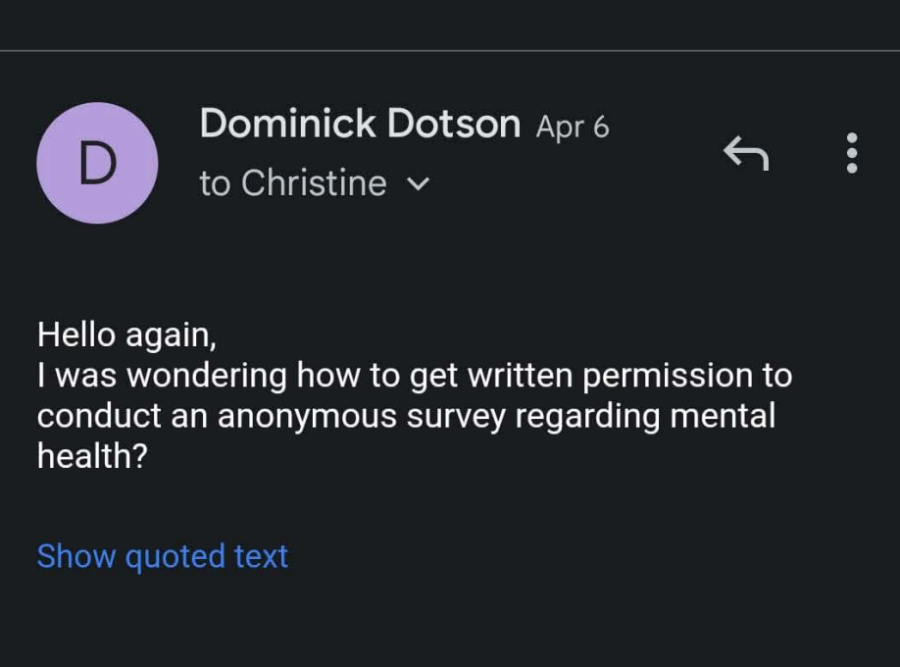 Northern Michigan University recently made local headlines for temporarily suspending a student earlier this month. The reason for the student’s temporary suspension? Making the fateful decision—shortly after a fellow student’s tragic death on campus by suicide—to send out “a survey through Google Forms to [other NMU] students asking how the university could improve the ways it handles mental health issues.”

According to a letter sent one day later by Christine Greer, assistant vice president and dean of students at NMU, the student, junior Dominick Dotson, was temporarily suspended because of the “seriousness” of the alleged violations of the NMU Student Code committed by him. However, according to the NMU Student Handbook, a temporary suspension may only be imposed on a student in three circumscribed scenarios: (1) when necessary “to promote the safety and well-being of members of the University community”; (2) when necessary for the “preservation of property”; or (3) the student “poses an ongoing threat of disruption of, or interference with, the normal operations of the University” (emphasis added).

Notably, Greer’s letter fails to specify how Dotson’s conduct—i.e., sending an online survey on one occasion to other NMU students about mental health issues on campus—falls into any of the three scenarios described in the NMU Student Handbook for a temporary suspension. In doing so, NMU has violated Dotson’s constitutional right to procedural due process, which encompasses the fundamental right to fair notice of the grounds underlying his temporary suspension.

Oddly enough, while NMU has imposed a temporary suspension on Dotson—which is supposed to be limited to situations in which a student poses a significant threat to the preservation of property, the safety of other students or the normal operations of the university—the university has inexplicably allowed him to stay on campus and attend his classes for the duration of his temporary suspension. But if Dotson’s conduct really posed a significant and continuing threat to the university’s operations, NMU should not be permitting him to stay on campus and attend his classes. It appears the university wants to have its cake, and eat it, too.

More than a decade ago, back when I was a young undergraduate student attending the university, Jason Morgan, who currently serves on the NMU Board of Trustees but at the time was serving as president of the Associated Student of Northern Michigan University, authored a letter to the editor that was published in the North Wind. In his letter, Morgan criticized Greer (but without specifically mentioning her name) for “overstepping her role as an advisor” to ASNMU on “numerous” occasions. Morgan also made a fleeting criticism of the then-ASNMU treasurer, Andrew Foster. Morgan wrote that Foster “would have been up for impeachment due to neglect of duties if he hadn’t resigned.”

After Foster complained to the NMU Dean of Students Office about this criticism, Morgan was charged with allegedly violating the NMU Student Code. More specifically, Morgan’s letter to the editor allegedly constituted “disorderly conduct” and “personal abuse.” According to the specification of charges, which were signed by Brundage, “Morgan allegedly provided ‘false and misleading’ information in his letter to the editor” which caused Foster to feel “degraded, humiliated and angry.” Eventually, “with the coordination” of the NMU Dean of Students Office, Morgan and Foster reconciled their differences of opinion in a joint letter to the editor published in the North Wind, resulting in the grievance and charges against Morgan being dropped by the university.

Nonetheless, the charges brought against Morgan were wholly inappropriate in the first place. First, Morgan’s actions could not have reasonably been considered “disorderly conduct,” at least as defined under the NMU Student Code at the time. That is, his letter to the editor did not breach “peace and quiet,” violate “public order in decorum,” or hinder a person’s “pursuit of his/her lawful right or occupation.”

Second, Morgan’s actions could not have reasonably been considered “personal abuse,” at least as defined under the NMU Student code at the time. That is, his decision to write a letter to the editor arguing that Foster, a student government official, could have been subject to impeachment proceedings for missing some student government meetings, was not done with the deliberate purpose to “injure, threaten, endanger, or degrade” Foster—nor did Morgan’s letter to the editor recklessly do so.

Finally, Morgan could not have been sanctioned by the university for his actions without violating his constitutional rights under the First and Fourteenth Amendments to the United States Constitution, as his letter to the editor was clearly constitutionally protected speech. Even though these concerns should have been obvious to her at the forefront, Brundage still decided to charge Morgan with violating the NMU Student Code.

Several years later, Brundage found herself embroiled in yet another campus controversy. According to an article published by the Mining Journal in the middle of November 2015, Brundage had sent an email to multiple students that semester—who had expressed suicidal or self-destructive thoughts or actions in the past—warning them that sharing their suicidal thoughts with other students, in any context, would result in them facing disciplinary action from the university. Brundage sent the email to those students in accordance with the university’s student self-destructive behavior policy, in place since 2013.

Only a few days later, the North Wind followed up with an article of its own about Brundage’s controversial email. In this article, Greer inexplicably appeared to defend the email sent out by the university, notwithstanding the media controversy surrounding it.

Shortly after reading about the campus controversy in the Mining Journal, but before the North Wind published its own article on the controversy, I sent the university an email, containing a letter addressed to the NMU president co-authored by me and Billy Littlejohn, my roommate throughout college. In that letter, we asked for Brundage to issue an apology to the student body and to resign her position with the university—as her conduct was “appalling,” “wrong,” and “counterproductive” to the mental health of the students attending NMU.

Nearly three years later, the North Wind wrote about the United States Department of Justice’s legal settlement with NMU regarding its past student self-destructive behavior policy, which the university had only changed at the beginning of 2016. According to the settlement with the DOJ, the university illegally discriminated against four students with mental disorders in various ways, including through its past enforcement of the student self-destructive behavior policy, which was impermissibly based on stereotypes and generalizations about people with mental disorders, in violation of the Americans with Disabilities Act.

No one from the university administration, including either Greer or Brundage, issued a formal apology to the student body in general or the four students mentioned in the settlement agreement between the DOJ and NMU in particular. This is unfortunate, but nonetheless unsurprising. Institutions of power tend to be reluctant in admitting fault. And they tend to be even more reluctant in apologizing for their misconduct, preferring to sweep it under the proverbial rug, hoping no one cares or even notices.

More recently—in fact, only last Friday, one week after the university decided to temporarily suspend him—the NMU Dean of Students Office charged Dotson with committing three violations of the NMU Student Code for his decision to send out on online survey to other NMU students about mental health issues on campus: (1) failing to comply with university policy, namely, the university’s acceptable use policy; (2) failing to comply with university policy, namely, the university’s human subjects research policy; and (3) failure to comply with an official request from a university official, namely, an official request from Dean Greer. However, each of these charges are wholly inappropriate, albeit for different reasons.

First, the charge that Dotson violated the NMU Student Code by failing to comply with an official request from Dean Greer appears to be frivolous, as it lacks a reasonable factual basis. The specification of charges alleges that Dotson “sent out surveys to NMU students without consulting the [NMU] Institutional Research Board, after receiving instructions from [Dean Greer] that [he] must do so.” However, the relevant email exchange between Dotson and Dean Greer shows a different story.

Second, the charge that Dotson violated the NMU Student Code by failing to comply with university policy—namely, the university’s acceptable use policy—fails to describe with requisite specificity how his actions contravened this policy, in violation of his constitutional right to procedural due process, which encompasses the fundamental right to fair notice of the grounds underlying the charge.

The university’s acceptable use policy requires “users” to “avoid activities that unreasonably tax system resources” and “other types of use which would cause network congestion or otherwise interfere with the work of others.” The specification of charges, though, does not sufficiently explain how Dotson’s use of his university email, to send a single online survey to other NMU students, did any of these prohibited things.

Finally, there is the charge that Dotson violated the NMU Student Code by failing to comply with university policy—namely, the university’s human subjects research policy—by sending an online survey to other NMU students about mental health issues on campus without first obtaining permission from the NMU IRB. However, as applied to Dotson’s situation, the university’s human subjects research policy constitutes a prior restraint on constitutionally protected student expression, which is presumptively unconstitutional under the First Amendment to the U.S. Constitution. In other words, Dotson cannot be sanctioned by the university solely on the basis that he failed to first obtain permission from the university to send an online survey to his university peers.

It’s important to recognize the disparity in treatment received by Dotson, on the one hand, and the treatment received by Greer and Brundage, on the other hand. Greer and Brundage have violated the constitutional and federal statutory rights of NMU students on multiple occasions over the past decade and a half, including illegally discriminating against students with mental disorders—but have not received any disciplinary actions themselves from the university, and continue to be gainfully employed by NMU.

In contrast, Dotson used his university email on a single occasion to send an online survey to other NMU students about mental health issues on campus and, not only was he immediately suspended on a temporary basis, he now faces the specter of permanent disciplinary sanctions imposed upon him.

However, neither will do so without outside political pressure from a large portion of the current student body—including a formal resolution from ASNMU demanding that Greer and Brundage resign because their continued employment with the university presents an ongoing threat to the well-being of the student body. Not only must the current student body demand radical change from the university administration, the many proud alumni of NMU must do so, too. Otherwise, history will continue to repeat itself, to the detriment of current and future NMU students.

The students at NMU deserve administrators in the university’s dean of students office who, unlike Greer and Brundage, will actually live up to their responsibility to “advocate for student rights.”