Stress-Buster Zumbathon held Friday for students to shake off stress 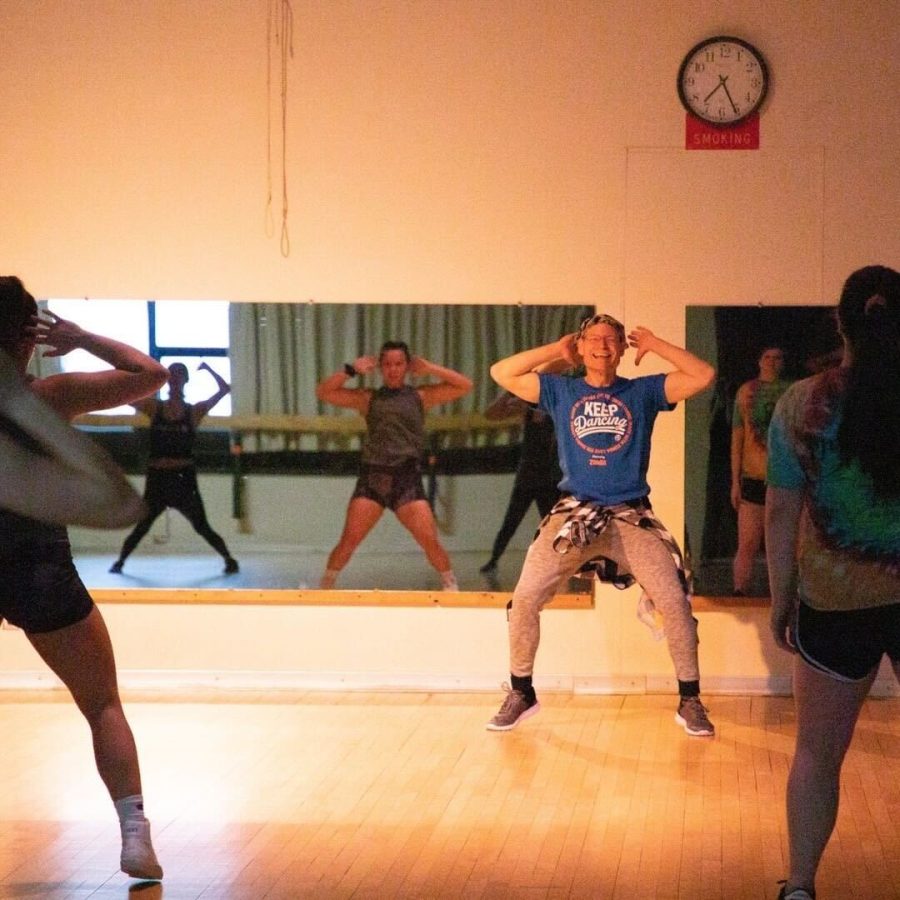 SHAKE IT OFF—Mark Shevy, professor and Zumba instructor, leads a Zumba class with a positive attitude. Shevy will lead the Stress-Buster Zumbathon event tomorrow from 7-8:30 p.m. at the PEIF.

NMU Rec Sports and Marquette Ending Hunger have teamed up to create an open Zumba event for students to enjoy and loosen up during finals.

The Stress-Buster Zumbathon charity event is being held at the Vandament Arena in the PEIF from 7-8:30 p.m. tomorrow, Friday, April 22.

The goal of the event is to provide not only a stress-relieving outlet to students but also to collect non-perishables for food pantries around Marquette.

Rec Sports is holding a line of stress-buster events before finals week, and Marquette Ending Hunger wanted to have one more event to raise awareness and donations for local food pantries. The Stress-Buster Zumbathon does both. It can provide mental wellness and support the food supply in our community, said Zumba Instructor Mark Shevy and advisor to Marquette Ending Hunger.

“Doing a Zumbathon was a great fit,” Shevy said. “A big Zumba event with a stage, lights, and loud music is something fun that definitely reduces stress, and it is popular enough to draw a big crowd for lots of food pantry donations. The students and I can’t wait.”

“NMU has made it so you can try something new that maybe you will fall in love with without paying for classes,” Senior Valeta Gage said.

Marquette Ending Hunger is a student organization that puts on events during the school year to create awareness of food insecurity in the area. The organization helps with food collection including the TV6 Canathon.

Rec Sports has also partnered with NMU Hip-Hop Dance Crew, NMU Mind Your Health, and Radio X student radio station. This will include an intermission performance by the Hip-Hop Dance Crew for attendants to watch during the Zumbathon.

There are a lot of stressful things happening around the world that affect students, social justice issues, the war in Ukraine and even finals. The stress-buster event and other Zumba classes are a way to deal with that stress and make some fun memories, Shevy said.

“We aren’t ignoring those things,” Shevy said. “We just have to make some good in the world and add to the positive side of life.”

NMU enters finals week soon and stress has built up around campus. Zumba is a great way for students to move their bodies and relieve stress before finals and then students can go into them with a great mindset, Gage said.

“With everything that has happened around campus I do think that this is a much needed stress reliever,” Gage said. “I think there will be a lot of laughs and smiles when it happens.”

The Zumba event is one of many stress-buster events that Rec Sports has put on for students, including the 10 minute massage, running from April 22-23 in the PEIF lobby and drop-in dodgeball on April 24.

“It’s a good method of relieving stress in a healthy way,” Shevy said. “It’s like taking a vacation without having to provide an airplane ticket.”

For full information on all other stress-buster events visit Rec Sports The Hub page.