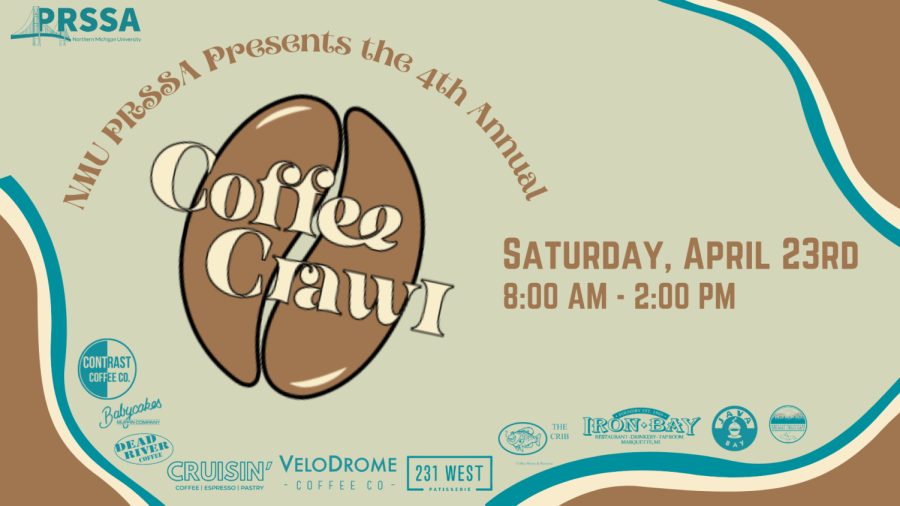 Starting at the Upper Peninsula Children’s Museum, the Public Relations Student Society of America will be conducting a journey through ten of Marquette’s local coffee shops to help raise funds to promote Sexual Assault Awareness Month.

The fourth annual 2022 Coffee Crawl begins on April 23 and will consist mostly of shops along Washington and Third Street. All contributions to the Coffee Crawl will be donated the Women’s Center in support of Sexual Assault Awareness Month. The cost to participate is $16, which is the same price for a one-night stay at the Women’s Center.

The Coffee Crawl is divided into three separate time frames: 8 a.m. to 10 a.m., 10 a.m. to noon and noon to 2 p.m. After a participant checks in at the Children’s Museum during the time frame they signed up for, they will receive a punch card which allows them to try out beverages at the different participating shops.

“[It’s called the] Coffee Crawl like the term ‘Pub Crawl’ where people visit many shops in one sitting,” Jones said. “We made a play on a pub crawl, because Marquette has so many wonderful and unique coffee places that people can go to.”

Along the route, there will also be information booths set by various organizations who will be promoting sexual assault awareness.

“There is never enough awareness, and never enough resources that can be raised for Sexual Assault Awareness Month and the Women’s Center,” Jones said. “Since its creation, Coffee Crawl’s main goal was in relation to SAAM, but it is also all student run, thus it is also good experience for our professional careers.”

CJ Nielson, a 2021 NMU alumni, was looking for an excuse to try out the different coffee shops around town. Nielsen, who participated in the event last April, found the Coffee Crawl to be the perfect opportunity to do so, both for coffee and a good cause.

“I had a good friend in PRSSA, so I signed up to support them,” Nielson said. “I really liked Cruisin’ … After the Coffee Crawl I went back like every week.”

Only 375 tickets will be made available for those who are interested in participating in the 2022 Coffee Crawl, which can be purchased through the event’s Hub page.

“[My favorite part] was just spending time with friends. I had a group, probably like eight to ten of us that went,” Nielson said. “A lot of these people I didn’t see recently, and then it was a group that we didn’t all always hang out at the same time so it was good to get everyone together.”