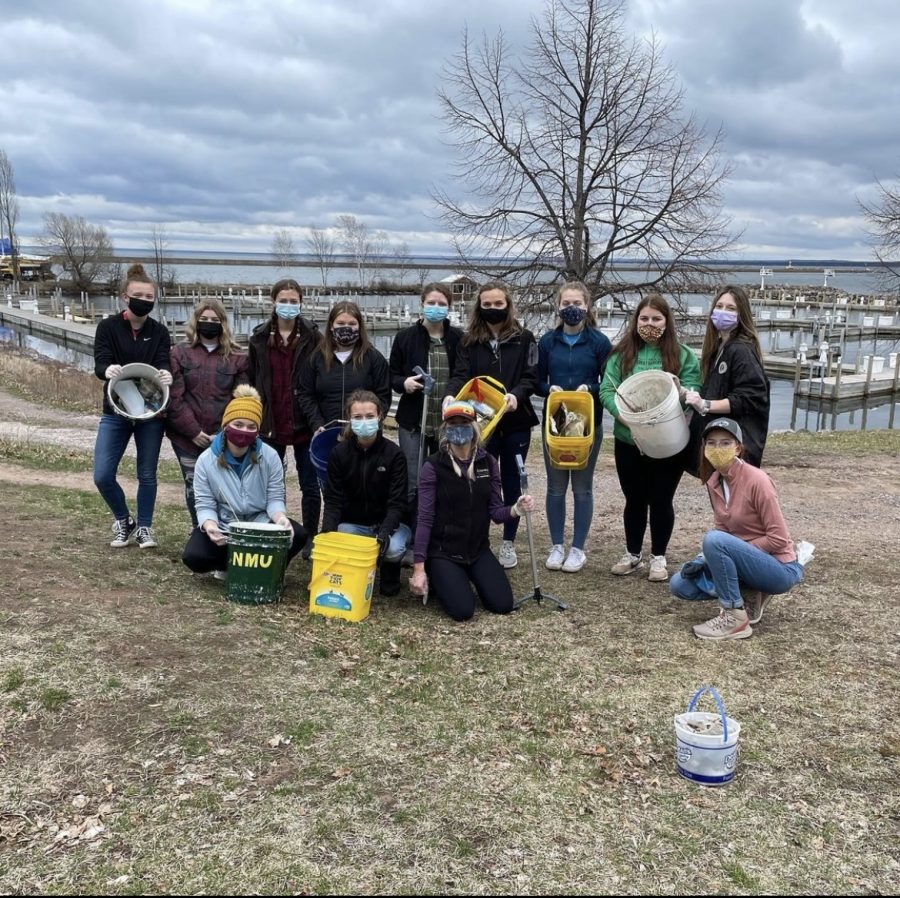 As the semester winds down students at NMU can participate in Earth week events hosted by Conservation Crew and other sustainability organizations on and off-campus such as EcoReps, Divest NMU, NMU Animal Club, Gamma Theta Upsilon (international honors society in geography) and Marquette Conservation District.

Katie Cothran, senior biology major and NMU Conservation Crew co-leader, said NMUCC is partaking in a cleanup during Earth week with Citizen Climate Lobby and Superior Health Initiative on Friday, April 22 at 4 p.m. and are asking participants to meet at the Marquette Commons.

“If you can’t come to the cleanup due to class or prior commitments, feel free to pick up your own trash,” Cothran said. “Even if you live on-campus, there’s a lot of trash, wherever you look, you can just spend 20 minutes walking down the street with your own plastic bag. Since we’re a student led organization, we typically join other events rather than make our own. It’s really a stressful time for us and we don’t really think that the beginning of finals week is a great place to advocate all of our time and energy into conservation.”

The group puts their time and energy into conservation year-round, not just during Earth Day and week. Taking personal accountability and initiative is a really good first step, Cothran said. The cleanup also will serve as a fun get together to celebrate the end of Earth week and how much trash was picked up the day before.

“It’s not to say that Earth Day isn’t a meaningful cause but you can do everything you do on Earth Day, literally every day of the week, all year round,” Cothran said.

The Conservation Crew is also hosting a run, walk, bike and skate 5K at Clark Lambros Park on Saturday, April 23 at 9 a.m. and participants should meet at the OLA Pavillion. It’ll be something different for the group, but they’re trying to show that sustainability is also about health and wellness, not just the environment, NMU Conservation Crew co-leader and junior Biology and Spanish major Brianna Elizondo said.

Last year, Conservation Crew planned Earth Fest with all of the sustainability clubs on-campus, holding a community cleanup and setting up by the Lower Harbor Ore Dock for people to pick up trash. Whoever brought back the most trash could win a prize if they collected the most, and 300 pounds of trash was collected that day.

“It was really nice just to sit outside in the park and be able to go out and do the cleanup,” Elizondo said.

“We want to make it both educational and fun,” Elizondo said. “Hiking, visiting the aquarium, a day in town and then the camping aspect of it too.”

Cothran has been a member of NMUCC for the entirety of her college career, becoming a co-leader in her second semester at NMU. Co-leaders divide the work equitably between five students, and with Cothran graduating, there was recently an opening for a new co-leader that has since closed. The benefits of becoming a co-leader, Cothran said, logging over 400 hours of Superior Edge during Conservation Crew events.

Elizondo joined NMUCC as a freshman in her fall 2020 semester and became a co-leader the following semester. The connections made by taking this position and being a part of this group have been great, Elizondo said.

“I would say it definitely helped me meet a lot of people at Northern, especially coming in during the pandemic and having close connections within the community and with partnerships,” Elizondo said. “The connections that you make within the school, but then also in the community with nonprofits you could possibly work for in the future is really great.”

Students interested in getting more involved in sustainability are encouraged to do so, but not to stress. The NMUCC wants students to do what they can do, because helping the planet means more than just Earth Day. That doesn’t even mean just going outside.

“Watch something educational, don’t eat meat or animal products, make an effort to pick up trash if you see it if you go on a walk,” Elizondo said.