Women’s rugby comes out the chute for their first game 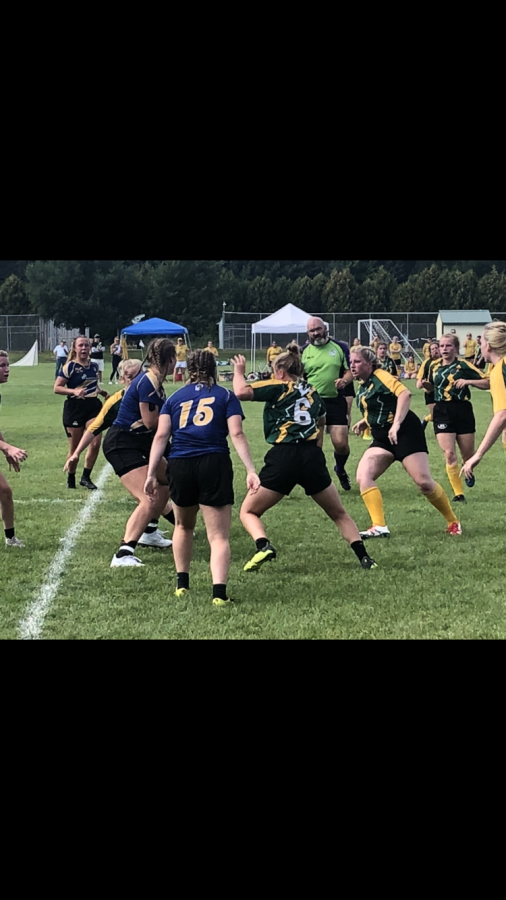 CLUB TEAM — Northstars crowd to the ball to make the tackle during the game against Eau Claire.

Coach Tina Nesberg is proud of her players for what they did on Sept. 17.

The Northstars played University of Wisconsin-Eau Claire on Saturday and had a challenging first half of play, before coming together for the last part of the match.

Women’s rugby is a club-based sport at NMU, so each player pays to be a member and no experience or tryouts are necessary to join.

Nesberg is looking ahead to next week’s game and is focusing on the internals of the team. It is Michigan Tech week, but more importantly it’s another week to work on the team. Nesberg wants the girls to just play hard, get better and have fun on the field.

“Michigan Tech, our sister team. We’re just going to continue to work on our game,” Nesberg said. “I never really focused on the opposition. It’s not about them.”

Reese Hetherington, a nursing major, is excited for the game against Michigan Tech on Sept. 24. She is ready to prepare in practice this week and put out a more complete game next time with her team.

Hetherington personally wants to improve her game to provide support when the team needs it most.

“Hopefully facing Michigan Tech will be a good entire game instead of just a good second half …personally what I’m working on or what I want to work on is getting in more rucks in the game and just being there for support for the others,” Hetherington said.

Nesberg believes the club is special to play for and notices the team bleeds for each other on the practice field and during games.

“Because it’s rugby. These girls have a bond, and they love each other. That bleeds off the pitch, and on the pitch, and it’s all the same,” Nesberg said. “They fight in the world, breathe and die for each other, and it’s apparent on the field of play.”

Kaitlyn Bammel, another member of the club, shares the same thoughts and philosophies as Nesberg and feels that close relationship with her teammates.

“We also say, ‘up with you,’ so like we’re always up together,” Bammel said. “In a team, we definitely strive for connectedness.”

Molly Mannor, an art major and first timer in the club, shared her thoughts on the game after looking back at the team’s performance against Eau Claire.

“I had a good time. We didn’t give up at the end, which I thought was good,” Mannor said.

Mannor believes that the club is very inviting and friendly. She is also preparing for next week, against Michigan Tech, with the rest of the team. She is very focused in practice in order to help improve her game.

“Hopefully facing Michigan Tech will be a good entire game … I would like to work on tackling people bigger than me. I felt like I shrunk an inch,” Mannor said.

Women’s rugby is just beginning the year and already getting better. The club seems to have a recurring theme this year of being a family, with the reason being, “because its rugby,” Nesberg said.

“Our coach, Tina, she really makes it fun, and she puts in just as much effort as we do. So, it’s great,” Hetherington said. “It really is just like a family.”